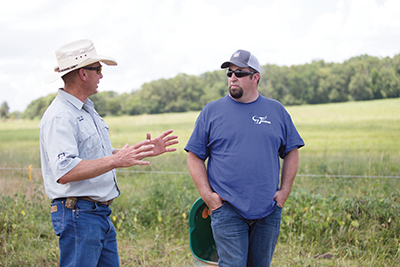 Whether it’s a notepad in their glovebox, scratch paper on the dashboard or official IRM Redbook in their pocket, most cattle producers have some means of record-keeping nearby. But pen-and-paper may soon be replaced by high-tech tools for herd management that put the power of data in the palm of a producer’s hands.

Years in the making, the PowerCalf Mobile App and web portal are now available to assist beef producers in recording and managing critical information, from calving records to feeding programs. Just like that little redbook, this information can be accessed anytime, anywhere, but MFA’s PowerCalf app surpasses written records by putting that data to work in measuring and benchmarking herd performance with convenient, user-friendly technology unlike anything on the market.

The app was officially launched in August, but PowerCalf’s beginnings go back to 2014, when MFA Director of Health Track Operations Mike John sought to create a program that would allow beef producers to take the information they collected and make it more useful. MFA would digitize, standardize and analyze that information to help producers make whole-herd management decisions. Then John and PowerCalf developers took that concept a step further. What if producers could input their own information as quickly as they could write it, chute-side and already standardized? Wouldn’t that be valuable to their operations? What if they could run reports or sort by the animal’s identification number? And what if they could do that from their phone, tablet or computer?

The development of the mobile app was driven by those goals, and MFA’s information technology department has been building and refining the platform with the help of beta-testers across MFA’s trade territory. Here’s what a few of them had to say about this new power tool for their operation:

Tim Myers runs Blue Horn Ranch in Farmington, Mo. He and five employees have a lot to manage with 3,200 acres and 400 cows having roughly 374 calves a year.

“Whenever anyone on the ranch enters new data, it updates all of us,” Myers said. “It’s a very straightforward and easy process. None of us are very computer literate, but this app is just a touch screen, easy to use, common sense.”

Myers began beta-testing the app in the fall of 2016 and has used it for three calving seasons. He recently received carcass information on the first set calves that went to market while he was using the app. The results were interesting. The difference between his top and bottom carcass was $552.

“If we have the ability to group cattle of like genetics and like size and sell in bigger numbers, the cow/calf operator has control of some of the market,” Myers said. “If we can prove genetics and prove what they’re going to do at the feedlot, it gives us the ability to demand more money and have more stability in our market. The only way you can do that is through data collection.”

Likewise, tracking performance is also one of the main goals of app testers Alvin and Janet Braun who run approximately 200 head of cattle near Ste. Genevieve, Mo. The Brauns began renting and working the family farm in 2009 when Janet’s father got sick. Since then, they’ve been retaining 20-30 heifers each year to build their herd. 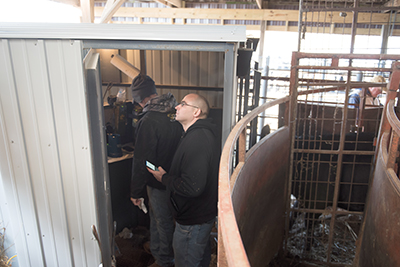 “Our record-keeping up until now has been a little pocket notebook that gets put in a drawer,” Janet said. “This spring, we used the PowerCalf app to record birth and weaning weights, and I’m anxious to do that again in the fall. I want to accumulate that data and look at it in black-and-white to compare how our calves do in their individual herds and how they perform compared to each other.”

For the past three years, the Brauns have sold calves straight off the farm, and they said with the PowerCalf app they will be able to provide more information for prospective buyers. Ultimately, they hope PowerCalf will help increase their profitability.

“The buyers are actually beginning to contact us,” Alvin said. “It’s a lot more beneficial to sell from here than to haul to an auction barn, and it puts more money in our pocket in the end. When we eventually start selling our heifers, we’ll be able to easily access that animal’s information and even be able to tell the buyers how their mothers and grandmothers performed.”

University of Missouri Extension Livestock Specialist Kendra Graham sees many operations in the state, some with various methods of data collection and others without any at all. She and her family run Kollmeyer Family Farms in Farmington, Mo., and served as a PowerCalf beta-testers.

“I think any type of information-gathering and record- keeping that we can have on the farm is beneficial,” Graham said. “Identification is key to a lot of our production records, so if we can make it easier for producers to record that data, I think people are more inclined to collect that information.”

“Whether it’s feeding, feed-to-gain or even just weights,” she said, “you can tell if your cattle are more or less productive.”

Through the PowerCalf app, producers can document and verify health and genetics through the entire process. They can benchmark their herd against others in the state. They can track feed efficiency and reproductive rates. They can determine which cows are the most profitable and which ones are costing them money. Moreover, they can do all this through the app on their mobile device or the web portal and know their information is securely stored in the cloud.

“One of the most exciting things I see happening with PowerCalf is it’s going to give MFA the ability to help our producers capture more value and be more economically viable,” Stephen Daume, MFA livestock consultant, said. “With PowerCalf, I 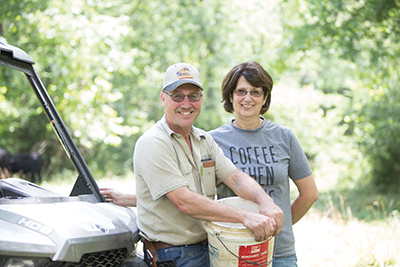 can now go out to a farm and help that customer look through his records—analyze his carcass weights, feed conversion, reproduction rates—and maybe even help him break his profitability down in terms of dollars of carcass weight per cow.

Ultimately, it’s about MFA being able to help our producers capture more value out of the products they produce, which, in turn, adds value to what we do here at MFA.”

“By capturing and digitizing all this data,” he said, “we not only have the ability to document and verify parentage, but we can also make observations such as hair coat quality, fescue resistance or respiration rate during heat stress. We could maybe even identify lines and breeds of cattle that have specific resistance to disease, like bovine respiratory disease. The PowerCalf app is going to allow us to easily track those genetics, and we could assist with beef improvement not just here in Missouri or the United States, but perhaps even globally.”

That’s the power possible in the PowerCalf app. For more information, visit https://www.mfa-inc.com/powercalf, the Apple store or Google Play. Hear more from these PowerCalf pioneers in this video at https://youtu.be/_ofUF4oSEEw.