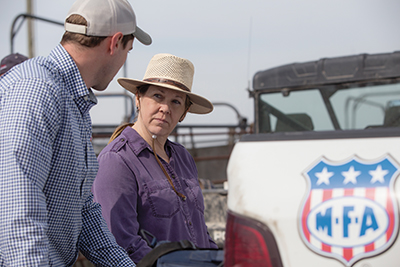 As a pre-algebra and algebra teacher in Lexington, Mo., Mary Jo Cramer knows numbers. And she knows the formulas she teaches correlate to real-world scenarios.

For example, on the nearby cattle operation she owns and manages with her husband, Steve, Mary Jo meticulously gathers birth, weaning and implant weights of each cow and calf on their ranch. From those numbers, they track the growth of every animal. Recently, that growth has been impressive, especially since the couple began using ABS genetics combined with their existing MFA Health Track program two years ago. During that time, the Cramers have seen a massive 33-percent increase in weights.

“We are recognizing that these AI-sired animals are a third bigger than those bred by the bull,” Steve said. “At 9 months of age, the AI animals are a month older but 300 pounds heavier. We didn’t realize it would be that big of a deal. We won’t go back to having just bulls.”

In 2010, Steve and Mary Jo began retaining their own heifers and began artificially inseminating in 2013. They work with Tera Black, an independent sales representative for ABS Global, a world-leading provider of bovine genetics, reproduction services and technologies. MFA recently partnered with ABS Global to launch ABS Alliance Advantage, which combines the vaccination and nutrition protocols of MFA’s Health Track preconditioning program with ABS’s proven genetics. 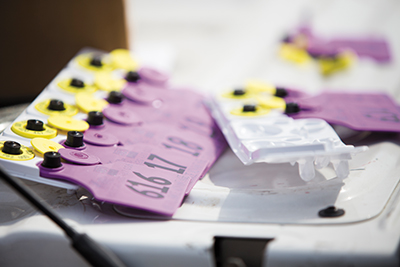 “We’ve had cows off and on this place all my life,” Steve said. “Most of those years, we operated on automatic pilot. We would just load them up and sell what was there. We decided we were tired of the cattle not re-breeding, and that’s what started all of this.”

In mid-April, Tera helped MFA Livestock Consultant Chad James tag the first set of ABS Alliance Advantage calves at Cramer Farms in Waverly, Mo., with distinctive purple tags representing the partnership and the animal’s qualifying attributes. Chad has also worked with the Cramers for many years through their participation in the MFA Health Track program.

“These calves are from our AI sire, Absolute,” said Tera, who offers ABS genetics and breeding services through her business, Elkhart Cattle Company, LLC. “He’s known for balance. His strong carcass proof, maternal traits, docility and documented feed efficiency made him a good fit for the Cramers’ operation. The first things you see between the purple-tagged calves and the others are size and performance. You can see a couple hundred pounds difference in some of these calves. From the top side, you can see how wide they are. We are stacking these genetics over time and really getting a powerful calf that we can expect to perform better throughout its lifetime.”

Tera said this combination of genetics and health will ultimately give Steve and Mary Jo a more profitable end product. 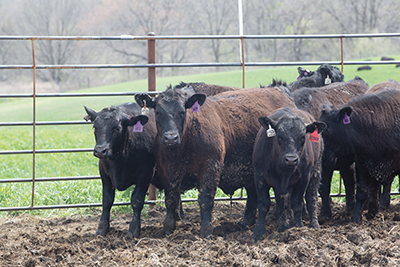 “We can’t manage what we don’t measure,” Tera said. “Steve and Mary Jo are doing the right thing by recording weights to see how these animals grow. It’s a big initial investment, but they are really starting to see how AI can pay off.”

In fact, in late July, the Cramers’ AI-sired steers were finished and ready to be shipped at 1 year of age, unlike their bull-bred steers that would need additional time and expense to feed and finish.
Mike John, MFA director of Health Track Operations, said the partnership between MFA and ABS Global is synergistic.

“It’s a program where we can tie and document some genetic value to the already value-added components of Health Track,” Mike said. “Now you not only know what you’re buying from a health standpoint, but the purple tags should give you some idea of what these cattle are capable of doing in the feed yard.”

According to Brian Brace, district business manager for ABS Global, the bulls qualifying for this program are part of the Circle A Sire Alliance and place in the top 35 percent for total profit index. The Circle A Sire Alliance was developed to determine actual profitability based on the costs and return of a sire’s progeny. Feed efficiency, performance and maternal data are collected along with carcass weights. This data is then used to help guide selection and mating.

“Matching up with MFA gives us a great opportunity to add value to customer’s progeny,” Brian said. “MFA is doing that with the Health Track Program. ABS is doing that with artificial insemination, delivering high-accuracy, quality bulls. It’s just the natural fit to marry the two together and work as a partnership.” 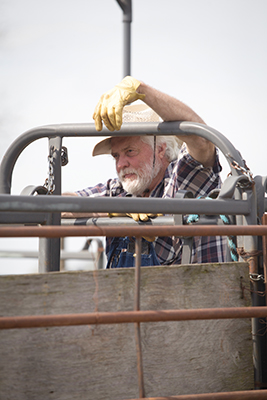 While there is an initial investment to what the Cramers are doing, Steve said owning and feeding a bull and maintaining fencing would be just as expensive for his modest herd of 100 cattle.

“We don’t cut corners,” Steve said. “I learned that a long time ago. I did everything the cheap way for 25 years because I was broke. But when I finally got on my feet, I found out going first class was the cheapest, and in the end, it is. Cutting corners doesn’t work. If you put something on automatic pilot, you’re going to pay for it.”

And Mary Jo is proving the old adage that numbers have power.

“Data can provide you with a lot of information,” Mary Jo said. “There are things you cannot physically see. You can’t look at a calf and tell how he’s going to grade or how he’s going to grow, but you can look at the numbers and they will tell you.”