Written by Chelsea Robinson on December 16 2016. 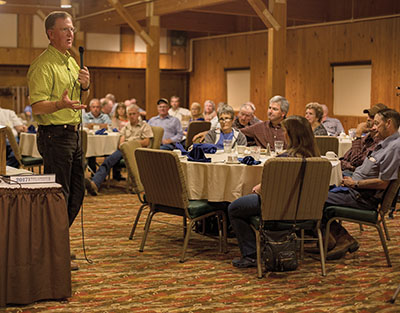 MFA Director of Animal Health Dr. Tony Martin has spent plenty of time on the road recently to answer questions about the upcoming implementation of the Veterinary Feed Directive. Here we highlight some of the top questions Dr. Martin took at producer meetings. The rule takes effect Jan. 1, 2017.

1. What will the cost of the VFD be to the producer?
Any cost or fee for the VFD will be at the discretion of the veterinarian who creates it. I have heard fees discussed ranging from nothing to over $100. The bottom line is that producers should expect some fee for the service. I tell producers not to consider the fee as a cost required to buy the document, but rather to consider it a fee for consultation. The real value of the VFD service comes from discussion between the veterinarian and producer about the need for antibiotics, which ones to use and how to best use them. These conversations will likely broach other topics about how producers might decrease or eliminate the need for antibiotic use. There could be room for improved vaccine protocols, environment, livestock handling, nutrition, genetics, etc.

2. How specific must information on the location of animals be for the VFD?
This question has been open to some interpretation. Some believe it has to be an official Premise ID. Some say just the owner’s address if the animals are on the owner’s property and nearby (say within a few hundred acres). Some say the location is a particular road address or coordinates for every building, pasture or facility where involved animals are located.
The commonly accepted answer from the FDA is that you need to provide the physical address where the treated animals are located. This will most often simply be the owner or manager’s address.

3. Do I need a separate VFD for each separate group of animals for the same claim?  In other words, will I need a separate VFD for cows grouped in different pastures for Anaplasmosis control? Similarly, would I need separate VFDs for multiple groups of incoming, commingled calves to receive standard pneumonia control protocol?
My interpretation is that a single VFD would fulfill the need for these examples. You would need to make sure that when you provide information for the VFD that you are giving an accurate approximation of the total number of animals. In the examples above, that would be the total numbers of cows in multiple pastures for anaplasmosis control or the total number of incoming calves to receive pneumonia control.

4. Can one VFD be used to purchase appropriate product from more than one distributor?
The feedback I have received from FDA indicates that this would be allowed—if the merchant locations are all under the same ownership and control (i.e. one company). I would add that the supplier needs to be within a reasonable distance of where the product will be administered per the VFD. In other words, if you have a VFD for animals on a northwest Missouri farm and file the VFD at a nearby MFA Agri Services, you probably ought not to use the same VFD for a farm you own in southeast Missouri where livestock is under someone else’s care. This might not be the case with an integrated production system, but I question if the same veterinarian-client-patient-relationship (VCPR) can apply to such broadly separated animals under private ownership.

6. What about VFDs for rabbits or other minor species?
FDA is considering this issue but has yet to offer a final answer on the subject. The consideration includes allowing the use of a similar claim from a comparable species to be written as a VFD for a minor species. That idea carries with it some controversy as it would essentially be allowing Extra Label Drug Use (ELDU), which has always been illegal for feed additive medications.

8. Many producers have heard that purchasing product from a valid VFD will have very specific limits concerning the amount of medication per pound or ton of feed with absolutely no overage allowed. Is that true?
According to FDA explanations, no. The use of the term “approximate” in the number of animals listed on the VFD form provides a level of flexibility in the amount of product that can be purchased.  Just as we do today, the VFD and conversations with veterinarians to get it provide an opportunity to discuss the amount of product actually needed and to discourage buying too much. From the perspective of the producer and the veterinarian, over-purchase makes no sense. Over-purchase can be poor management in the sense that you spend money on an excess product that might go out of condition or lose nutritional or medication effectiveness. From the veterinarian perspective, it risks feeding medicated product longer than needed or directed by the VFD and the legal requirement to quit feeding any remaining VFD product on hand after the VFD expires.

9. There has been some concern from veterinarians and producers about VFDs requiring a specific grams-per-ton figure for the amount of medication allowed by the VFD. Will the gram-per-ton or pound-per-ton be specified on the VFD?
I contend that the VFD should be legal if it properly lists the legally claimed dose for a specific antibiotic in use claim given on the VFD. In most cases, that will be a figure of milligrams per pound of bodyweight or milligram per-head-per-day. That amount can be achieved through many different, legally approved medicated feed products (with varying grams-per-ton formulations). These formulations, when fed at the appropriate level per day, will accomplish the stated dosage stated on the VFD. For this reason, and given the fact that the VFD gives an “approximate” number and size to animals involved, grams-per-ton cannot be accurately and consistently given on a VFD without potentially creating severe restrictions on product choice and availability for the producer.

10. What “teeth” are written into the law? What repercussions will be enforced as the rule is launched?
The “teeth” are potential fines and, more importantly, the ability to designate treated animals as “adulterated” and prevent their sale or movement in the marketplace. But remember, the initial inspection effort will be to gather information about how the process is going and to educate producers and veterinarians.

11. Will VFD documents also be sent to the FDA? Will these VFD documents be subject to Freedom of Information requests?
The answer to both is no.

Kansas State University has a useful catalog of information on the VFD here: http://mfa.ag/2g89QKJ.