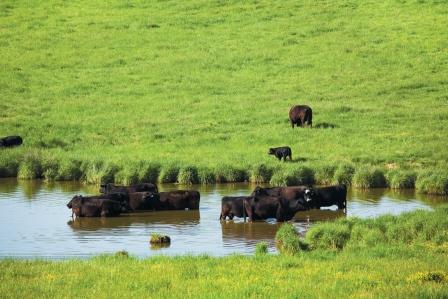 Fescue toxicosis continues its quiet theft among cattle herds in the Midwest. The condition results from cattle fescue that hosts an endophyte fungus that produces toxic alkaloids (ergovaline) in the plant. You’ve seen the damage in action: vasoconstriction that causes hoof problems and labored breathing, reduced daily gain, trouble with breeding and the tell-tale heat stress that leads cattle to stand in ponds even on cool days.

More than 90 percent of fescue pastures tested in the Midwest contain the endophyte fungus. The irony is that, aside from the harmful effects the fungus has on cattle, it’s also part of the reason that fescue is so persistent—it actually helps the plant.

But at what cost? A study in 1993 estimated fescue toxicity cost the U.S. beef herd $609 million dollars. If you account for inflation, the cost is more than $1 billion today. And, while you can account for general inflation, it is harder to figure the actual cost to producers during times of high beef values. The peak prices from a couple of years ago may have faded, but producers don’t want to give up daily gain in today’s market either.

By whatever measure, fescue toxicity is a drain on the industry.

There are a few approaches to consider in mitigating problems from fescue toxicosis. One, says MFA director of nutrition, Dr. Jim White, is to move cattle to non-endophyte-infected pasture.

“If you have the resources, cattle can be moved from toxic fescue to warm-season perennial grass pastures in the late spring or early summer,” he said. “Dilution with legumes in the fescue pasture is also an option, but you need to use something that will compete with fescue: red or white clover or lespedeza. The clovers are easily established into existing sods. They’re compatible with tall fescue and able to increase animal gains. Research shows that adding clover to infected tall fescue stands can increase steer gains substantially. Adding clover to a toxic tall fescue pasture has been shown to deliver an extra 0.15 pounds of average daily gain to grazing steers. Additionally, interseeding clovers has consistently been shown to dilute the ergot alkaloids and enhance performance.”

If economically feasible, supplementing cattle on heavily endophyte-infected pastures is an option. If you see symptoms of fescue toxicosis, you may already be paying a price that would have afforded those supplements.

Producers should do something about the toxin load the animals are eating before seeing the symptoms. “In general terms, you can figure you lose 0.1 pounds of average daily gain for each 10 percent infection that you have on the pasture,” said White. “If I had to use infected fescue, my first preference would be to feed 0.5 percent to 1 percent bodyweight of a complete feed. In the spring and fall, during rapid grass growth, this provides dilution, better protein efficiency, additive effects and trace mineral-vitamin supplementation,” he said.

Finally, you can change the pasture itself. Renovating infected pasture and replacing it with “novel” endophyte strains retains the value of fescue for its persistence and soil-holding capabilities without supporting the toxic endophyte fungus. Instead, these fescues contain a “beneficial” endophyte that does not produce toxic alkaloids. In the past decade, seed breeders have brought several lines of novel-endophyte fescue to market. MFA offers BarOptima Plus E34 and MaxQ.