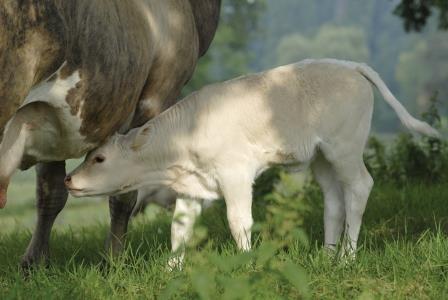 Evidence continues to mount that you should start managing calves before they are born. That’s a tough thing to do, you say, but if you think about it, it’s not. “Fetal programming,” or developmental programming is the idea that maternal stimulus at critical times in fetal development has long-term impacts on the offspring.

As beef producers, you are used to hearing about studies to see how nutrition impacts health and productivity of a calf. Traditionally, these studies have been post-natal, or after the calf is born. This makes a lot of sense. At that point, the animal is identified as an individual, its situation (its genetics and environment) is unique.

But how did it do up until birth? Did it get proper nutrition? Was its immune system bolstered? While maternal nutrition during pregnancy plays an essential role in proper fetal and placental development, less is known about how maternal nutrition impacts the long-term health and productivity of the offspring.

A cow in gestation is eating for two. Clearly, prenatal growth is sensitive to the direct and indirect effects of maternal diet—basically from just after conception.

In general terms, though, herd management has evolved as if undernutrition of a pregnant cow during the early stages of fetal development isn’t much to worry about. After all, what nutrient requirements could a fetus really need during the first half of gestation? At least, this was the conventional wisdom back when I was in grad school. That’s because some 75 percent of the growth for a ruminant fetus happens in the last two months of gestation. But, according to work from K.A. Vonnahme at North Dakota State University, “it is during this early phase of fetal development that maximal placental growth, differentiation and vascularization occurs, as well as fetal organogenesis.” All of these are critical for fetal development.

If that early growth is challenged, it can compromise the animal’s longterm performance. In other words, not only is neonatal health compromised, but the subsequent health may be “programmed” as offspring from undernourished dams have been shown to exhibit poor growth and productivity and also to develop significant diseases later in life.

In commercial cattle production settings, undernutrition often occurs during gestation—especially during the first two trimesters. This results from either low feed reserves or management practices that result in cows losing weight during late fall and early winter.

This theory of developmental programming has been experimentally challenged and verified using several animal models, particularly rats. Here is where it gets tricky. Variations in the duration and severity of maternal undernutrition do not always result in a reduced birth weight. Physiologic alterations such as glucose intolerance, skewed growth patterns and alterations in carcass characteristics have been reported. Thus, birth weight alone may not be the best predictor for calf survival and productivity. Research at NDSU shows that beef cows bred to the same bull and carrying female fetuses delivered calves of similar birth weight in situations when they were fed adequately and when they were underfed.

According to Vonnahme, previous studies of sheep and humans have demonstrated that an extended period of maternal underfeeding during the first half of gestation results in relatively normal birth weights. However, it leads to increases in the length and thinness of the newborn. The practical significance of fetal programming lies in the associations between reductions in maternal nutrition during early gestation and the risk of abnormalities in muscle function, mineralization of bone and organ function. Unfortunately, at present, little is known about the specific nutrient induced changes that end up causing poor development later in the animal’s life.

Aside from disease, Vonnahme’s research suggests that long-term muscle development is also affected by maternal nutrition. “Growth restriction seems to be especially important when fetal muscle development is adversely affected. Skeletal muscle has a lower priority in nutrient partitioning compared to the brain and heart in response to the challenges to the fetus during development, rendering it particularly vulnerable to nutrient deficiency,” he reported. Basically, maternal growth is critical for muscle development because that’s when the number of muscle fibers is established. Muscles grow after birth, of course, but the base number of fibers is already set.

According to Vonnahme, “steers from cows which were nutritionally restricted during gestation had lower live and carcass weights compared to steers from adequately fed cows at 30 months of age.”

Vonnahme pointed out that retail yield on the carcasses, based on fatness, were greater in the steers from nutritionally restricted cows, indicating that while growth may be hindered in offspring from cows receiving low nutrition during pregnancy, ability to accumulate fat is not. The quality grade is another matter. MFA has developed a nutrigenomic technology with Ricochet that will focus on these issues. It will be available later this year.