In this Feb Today's Farmer

Slowing swine growth during market disruptions
Researchers show how to minimize the cost of holding pigs longer than planned
by Dr. Jim White

Recipes
Mixin’ up muffins - as printed via Flipbook

Viewpoint
Hindsight is 20/20
by Ernie Verslues

Click to view the magazine as printed using a flip book. 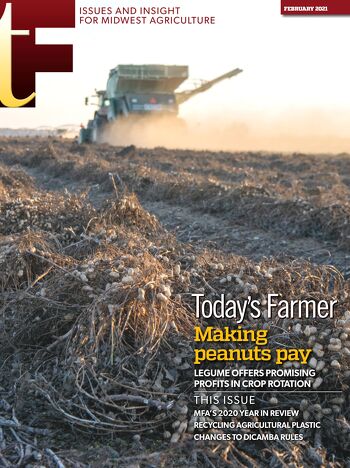 In this Dec/Jan Today's Farmer

Lighting up the town

The Centralia Lighted Tractor Parade has been a holiday tradition for the central Missouri town for the past 14 years.

Scott Kuntz of Scotty’s Auction Service strings lights on the back of a trailer that carried an electric blue 1950 Chevy Deluxe coupe in the 2019 parade.

Ginger was among eager participants in last year’s parade, brought along by her family, Robert and Charlene McMinn, Sharon Mc-Minn and Ethan McMinn of Hallsville. They saw the 2018 parade online last year and decided they wanted to get involved.

More than 75 entries took part in the 2019 parade, which starts in the parking lot of MFA Agri Services and loops through Centralia. The parade has gotten so big that the beginning often catches up with the end.

During the holiday season, many of these lighted stars can beseen atop MFAs across the territory.

Abby Swanstrom, daughter of Scott and Brittany of Columbia, gazes at the Polar Express parade float.

A lighted wreath adorns the front of a Case IH service truck from Heartland Ag in Marshall, Mo.

This Grinch-themed tractor and float was one of the more popular entries in last year’s parade.

Mrs. Claus and Santa pulled the Polar Express float with a vintage 1952 Ford 8N tractor owned by Kelly and Susan Young of Conyers, Ga., which is east of Atlanta.

As the sun started to set on a cold December afternoon, trucks, wagons and tractors filled the MFA Agri Services parking lot in Centralia, Mo. These com­mon, everyday vehicles and implements were soon transformed into a collection of illuminated wonders as local farmers hooked up twinkling Christmas lights to generators.

For the 14th year in a row, Centralia will host its annual lighted tractor parade on Dec. 18, 2020, pending any COVID restrictions. Sponsored by the Centralia Young Farmers association, the event is now a cherished community tradition. Lo­cal farmer Brian Schnarre, one of the parade’s founders, had seen something similar in another small town and suggested it to the group.

“I think we had 26 floats the first year,” Schnarre said. “They thought it was a great idea, and it’s just been growing ever since.”

The parade is open to anyone who wants to enter. And while coronavirus con­cerns cause some uncertainty surrounding this year’s event, challenges aren’t new to those who have participated previously.

“I remember the very first year, it was pretty foggy,” said Darren Reynolds, another farmer and parade participant, who was 35 years old at the time. “It was almost questionable whether you should even drive a tractor to town or not, but for as small as it was, there were a lot of people watching. The fog in the air really made the lights glow. It was neat. It was probably one of my favorite years.”

What started as a small group of participants now encompasses more than 75 exhibits every year. In fact, it’s so large now that the parade loops around the entire downtown, the front often returning to the MFA parking lot before the last vehicles have left.

Many farmers start working on their entries after the crops come out of the field. In some years, that allows only a short window between harvest and the parade. Local farmer and vol­unteer firefighter Adam Brown helped decorate a fire truck the first year, and in later years pulled a float resembling a candy cane, made out of an auger and PVC pipe wrapped in ribbon and lights.

“It’s a lot of work,” Brown said. “A couple of years we were still busy in the field, so we had to stop participating, but so many people are involved now.”

Like many parades, the floats range in complexity. Brian Vance, who raises row crops and cattle, recalled one of his favorite entries from previous years.

“One year, a friend of mine pulled a camper covered in lights with the movie Christmas Vacation playing through the win­dows,” Vance said. “He was out in front of it in a white bathrobe and hat dressed like Cousin Eddie. At that point, it was the coldest year we had ever had. He had to be freezing, but he said it was worth the cold just to get the laugh.”

Every year gets just a little bit better, Schnarre said.

“We just do it to have fun,” he said. “When you see all the kids waving at you and smiling, it’s worth it.”

As an added bonus, the parade also brings tourists into the community, Schnarre said. The event has expanded beyond just the parade itself. Restaurants and shops stay open late. On the square, food trucks set up for the event, and there are reindeer exhibits for kids to pet.

“It’s become something that in previous years has brought some of the largest crowds we see in this commu­nity all year,” Reynolds said, adding that now, instead of building a float, he’s content to take his 9-year-old twins to watch. “I just don’t feel like there’s anything else in our community that brings as many people out.”

Visit Centralia, MO Lighted Tractor Parade on Facebook for more informa­tion. Note that there is another Cen­tralia lighted tractor parade in Wash­ington state, so be sure to put “MO” in your search. This year the parade will look a little different due to COVID-19. There will be a reverse parade on December 18th. Tractors will be parked in the fields along Route CC between Centralia and Sturgeon. Spectators are welcome to drive the route anytime between 7 PM and 9 PM. For route information click here.

CLICK HERE is a LINK to the Google Map Route of the 2020 reverse Parade.