What we learned from Training Camp and MFA replicated plots 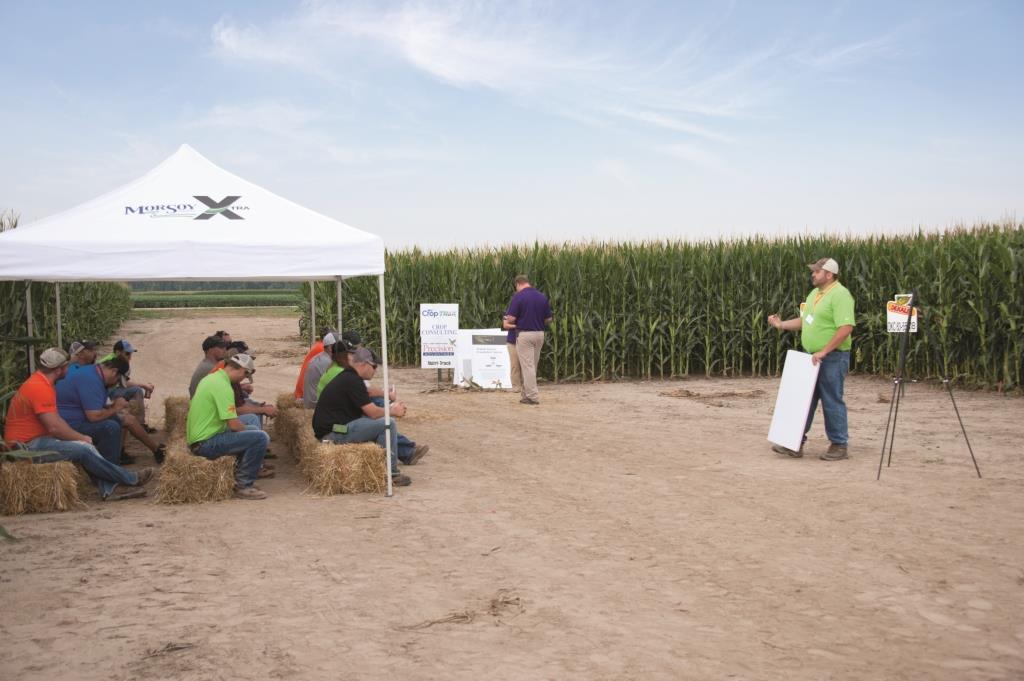 events, MFA’s Third Annual Training Camp and MFA’s Annual Grower Field Day. The continued attendance of these events is just one indicator of MFA’s commitment to employee development and education of not just its staff but its patrons as well.

MFA’s Training Camp gives MFA employees an opportunity to get hands-on participation in our testing and product evaluation process. Employees viewed trials on MorCorn and MorSoy varieties, fertility and seed treatments, as well as heard presentations from experts on sprayer clean-out, weed control technologies and the latest information on premium fertilizer products.
2014 was the first time MFA also extended invitations to growers to visit the testing grounds. MFA locations from all over MFA’s trade territory brought producers in to witness the process in which MFA tests and evaluates products. These growers saw presentations from MFA’s agronomy staff, industry reps and university personnel. Hopefully, this information helps inform them on agronomic management going forward.

Beyond the educational opportunities these field days provided, multiple replicated testing sites across MFA’s trade territory delivered data vital for product improvement and evaluation. On the following pages, you will find summaries and results of the various trials conducted at the Training Camp site in Boonville, Mo., in 2014.

MorCorn hybrid trials
The 2014 Training Camp started April 21 with the planting of the short-season and full-season MorCorn variety trials. 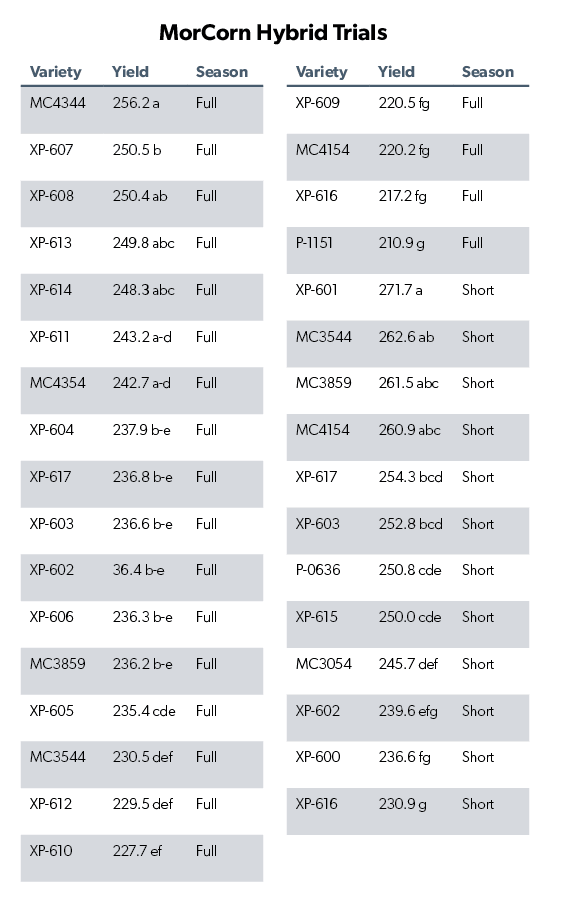 These trials included 25 hybrids spanning from 99-day corn relative maturity (CRM) to 119 CRM. We tested 17 experimentals against six MorCorn commercial checks and two competitor hybrids. The field was fertilized with 220 pounds of actual N in the form of Super U. The population was planted to 34,000 plants per acre. Yields were impressive for a second year in a row at Training Camp. Our top end hit 272 bushels per acre with an experimental hybrid. Dragging the bottom was a commercial competitor at 211 bushels per acre. The low end was indicative of the excellent growing year we enjoyed.

Although yields were exceptional, they were not up to the level we saw in 2013. One reason for this may have been slow emergence. The 2014 corn in the Boonville Missouri River bottoms made us nervous. The night after planting, the field received a pounding rain producing a crust on the surface. Then it got cold. For weeks we checked, waited, watched and dug up seedlings that were struggling to emerge. Finally after three weeks, seedlings broke the surface and started growing. It was amazing to see the stand come up strong after the initial harsh conditions.

Another factor during the 2014 growing season was an abundance of moisture. Training Camp has highly productive soils, but it is in a floodplain that can pond water. Throughout the season, our trials were in standing water for long periods of time, which may have caused a high amount of denitrification and N loss. That may have reduced our top-end yield potential.

In addition to Training Camp, these hybrids were tested across multiple environments and geographies within MFA’s trade territory. Results from this year’s MorCorn Training Camp trials can be seen in the tables at right.

Corn nitrogen source and timing trial
In order to evaluate the effects of the formulation of N applied treatments, we looked at urea, ammonium nitrate, and products know to be effective N stabilizers to urea. These products were applied in a replicated trial. Additionally, to test the effects application timing, each product was applied on two different dates, either at planting or at the V6 growth stage of the corn.

Statistically there are not a lot of conclusions we can make from this trial. Nitrification inhibition from Instinct at planting looked to be beneficial. But ESN’s slow availability showed to have been a possible detriment in this trial when applied alone. ESN is recommended to be applied with 10 to 20 percent of available nitrogen. This year N timing did not appear to be a major factor when looking at the data, but it is important to remember the unpredictable weather conditions of each unique year play a major factor on how much N may be lost. 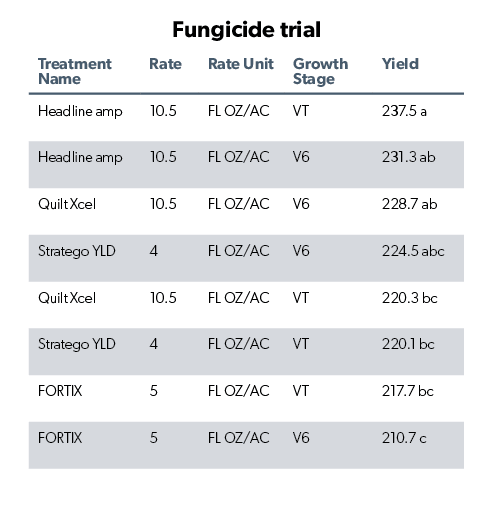 Fungicide trial
Higher-than-normal precipitation and good growing conditions were pervasive across the Corn Belt this year. The assumption made by most agronomists halfway through the season was that corn foliar diseases would be a big issue. However, that did not turn out to be the case. Even though we did see some level of common foliar diseases, including common rust, southern rust, gray leaf spot and northern corn leaf blight, the level of infestation was generally moderate at most. This was also true at Training Camp. These foliar diseases were present, but their severity was low.

The Training Camp Fungicide Trial consisted of two treatment application timings—either at V6 or at VT. We also looked at four different fungicides. All four fungicides were premix formulations that combine both a Group 3 and a Group 14 mode of action. Results from the trial are below.

Generally, we do not recommend a fungicide application at V6. University research has shown that the best corn fungicide timing is at VT. Guidelines have been established by Iowa State University to aid in the decision to spray. These guidelines are based on whether or not the disease presence warrants spraying to prevent potential yield loss. They are as follows:

Consider a fungicide application if:

1) The hybrid is rated as “susceptible” or “moderately susceptible” and 50 percent of the plants in a field have disease lesions present on the third leaf below the ear leaf or higher prior to tasseling.

2) The hybrid is rated as “moderately resistant” and 50 percent of the plants in a field have disease lesions present on the third leaf below the ear leaf or higher prior to tasseling and additional factors or conditions that favor disease development are present.

If you decide to use a fungicide, another good practice is to use a premix product or tank mix multiple modes of action. Similar to weed resistance with herbicides, there has been documented pathogen resistance to Group 3 (DMI) fungicides. Always follow recommended label rates and application directions.

MorSoy soybean variety trial
MFA’s trade territory is diverse in terms of cropping practices, and that can be illustrated 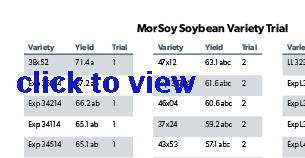 It is important to keep in mind that when reviewing this data that typical soybean maturities in Boonville, Mo., range from a late Group III to an early Group IV. Also of note was the high incidence of Sudden Death Syndrome in the soybean plot this year. While this did allow for an opportunity to evaluate a varieties tolerance to SDS, abnormally high levels of SDS impacted the testing of varieties for yield potential. Results could be quite different in a year with more typical SDS levels.

Agricultural biologicals
Just a few years ago you would probably get a confused look if you mentioned biologicals to someone in agriculture. 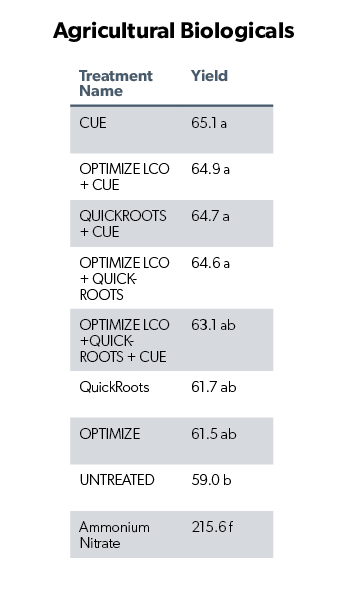 They might think you were referring to biotechnology. That’s not the case anymore. Now, the agricultural industry as a whole is investing major resources into researching and developing new biological products.
Part of the allure for biologicals in agriculture is the fact that they do not involve transgenes or genetic engineering. Biologicals may be plant extracts, naturally occurring microorganisms or other types of organic matter. Note the word “natural.” This means products may be deregulated more quickly than, say, a new trait in soybeans. Bringing biologicals to market is less time consuming and requires a lower level of investment.

In the past, biologicals sometimes have been viewed as “snake oil” products. However, in today’s market, an increasing amount of research is being conducted on biologicals to determine what works and what doesn’t. Companies like Syngenta and BASF are purchasing companies that specialize in biologicals. Monsanto has formed the BioAg alliance with Novozymes. This may not give instant credibility to these products, but it certainly shows that they aren’t going away anytime soon.

MFA is testing biologicals to make sure we stay ahead of the game. This year at Training Camp we looked at biological soybean seed treatments from Novozymes. One product that stood out to us was Cue. Cue is a plant-signal compound for soybeans. Cue improves root structure by activating fungi in the root zone before the plant can do it by itself, thus enhancing water and nutrient uptake. Results from our trial can be seen at left. 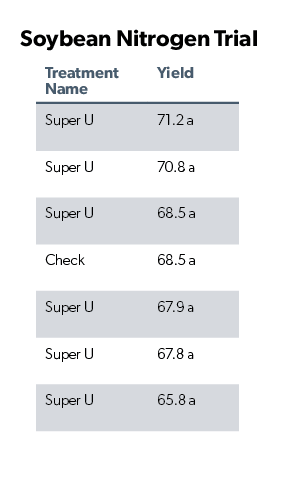 Soybean nitrogen trial
Results from fertilizing soybeans with nitrogen fertilizer have been mixed. High-yield environments may give the best chance at producing a yield increase from adding N, but in certain conditions in low yielding environments may produce a positive response to N fertilizer. The International Plant Nutrition Institute reports that poor nodulation, low soil N, plant water stress, absence of Bradyrhizobium and other early season stresses may be conditions promoting a positive yield response to N fertilizer. While some research has shown a positive yield response to N fertilizer during vegetative growth, most studies point to application at or just after R3 (beginning pod) as the optimal application timing.

During the 2014 growing season at Training Camp, we conducted a trial with an R3 application of Super U to soybeans at six different rates, plus a check of no added N. Our results (shown at right) indicate that we did not receive a yield response from the fertilizer. The application timing coincided with a lack of rainfall for about two weeks post application. By the time it rained enough to move the fertilizer into the soil making it available to the plants, we were possibly past the time it could provide much benefit to the soybean yield.

Using N fertilizer in soybeans may be a practice you wish to consider down the road. When evaluating whether or not to proceed with an application, be sure to consider yield potential, current soybean health, fertilizer and commodity prices to see how much you stand to gain from an application.