For weed control, focus on doable, not miraculous

Poor control and weed resistance wait for our mistakes

Last year was yet another growing season for the record books. I commonly hear a saying among producers: “No two years are the same.” And I can offer another common saying in response: “Ain’t that the truth.”

In the past growing season, yields in some locations across our trade territory were better than they expected while others experienced low yields for the second year running. As we head into a new year, I am hopeful that this growing season will be a good one for all.

Overall, weed control across MFA’s territory during the 2013 growing season was better than I expected. But we still have to keep fighting. There are four major weeds that are considered “driver” weeds for most of our fields. They are waterhemp, Palmer amaranth, marestail and giant ragweed. The successful weed control we saw last year can be attributed to the increase use of pre-emergence herbicides and the fact that we started with cleaner fields. More importantly, we had timely rain to activate those residual herbicides. In 2012 we applied a lot of pre-emergence herbicides, but never received enough moisture to active them and provide the kind of weed control we needed.

Each herbicide requires different amounts of rainfall to activate depending on which compounds are in the herbicide.

The overlapping-residual method is gaining speed across the trade territory. This is the use of a full rate of a pre-emerge herbicide applied at planting followed 20 to 30 days with a post-emerge application of another residual. The goal is to never let the weeds out of the ground.

It’s a sound program, but I see a disconnect between perceptions, expectations and outcome at times. When people call with questions regarding post-emerge applications, I always ask how big the weeds have gotten. The typical response is four to six inches. Upon further investigation I often learned that the caller’s four to six inches is different than mine.

When we are making any post-emerge herbicide application we must be targeting weeds smaller than four inches. This stands true for today’s technology as well as any new technology that is currently in the pipeline. Once the weed is taller than four inches the success rate of the application significantly decreases. Again, let’s fight them in the soil. Yes, we have to have Mother Nature’s help, but that is the best option we have.

Liberty Link technology is also gaining speed across the territory. I hear a lot of success stories—and a few horror stories. We typically see good results when we are spraying at 15 to 20 gallons per acre with good coverage of the target species.

What I don’t like to hear are the success/horror stories that go: “I can’t believe how big the weeds were that we killed.” (An agronomist’s nightmare.) This kind of application puts a significant amount of resistance pressure on the technology. We can’t afford to lose another technology. Our weed control system in a Liberty Link program still consists of a full rate of a pre-emergence herbicide followed by a residual tank mixed with Liberty. 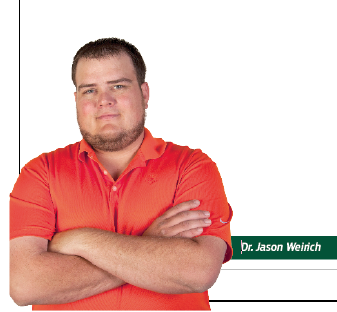 As you plan for the 2014 season, lets plan for success and utilize sound agronomic principles. A two-pass program in corn and soybean is here to stay.

I mentioned in September that Steve Cromley left MFA for another company. I am glad to announce that Jason Worthington has accepted the staff agronomist position. He started with the agronomy staff this year.

Jason will be in charge of the CropTrak program for MFA. He will also be working on nutrient management plans, training, research and producer meetings. We look forward to the excitement and new ideas he will bring to the agronomy staff. Look forward to seeing some articles from him in the near future.

In next month’s issue I will publish the results from our research site in Boonville along with the variety trials we had across the trade territory during the 2013 growing season.

If you would like to develop a weed control program for your farm, please contact your local MFA agronomist.

Dr. Jason Weirich is director of agronomy for MFA Incorporated.