Get the most out of new soybean herbicide traits

Written by Shannon McClintock on October 27 2020.

Soybean herbicide trait packages have changed quite a bit over the past 25 years. 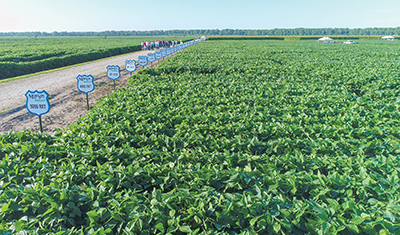 Each year, MFA agronomists test the latest soybean seed traits at replicated plots throughout the region. No matter what varieties growers choose, however, planning an effective weed-control system is paramount to getting the most out of the technology. In 1996, Monsanto released the Roundup Ready trait, which immediately changed the game for how farmers managed post-emergence weeds. Nearly 15 years later, LibertyLink beans were introduced in 2009, giving producers the ability to spray glufosinate over the top of soybeans to control emerged, hard-to-kill weeds such as pigweed, marestail and morning glory.

The increase of herbicide resistance in weed populations over the past sev­eral years has led to more traits being added to the portfolio. In 2016, Xtend soybeans were introduced, which allowed for approved dicamba chemistries to be sprayed over emerged soybeans. Soon after, Enlist E3 beans were added to the portfolio. This trait meant approved 2,4-D herbicides could be sprayed over the top along with glufosinate. Now, for 2021, the most recent addition is XtendFlex technology to allow for approved dicamba products and glufos­inates to be applied.

There is a common theme among these traits—they’re designed to increase yields by improving crop safety and increasing effectiveness of weed control. With so many choices, how do you decide which one is best to use? For me, the answer is, “It depends.”

When used properly, any of these systems released in the past few years can be used to effectively control weeds. The traits are additional tools in the toolbox that we can use if necessary.

Your choice in technology depends on several factors, and those factors may vary. That’s why it’s important to not only have a cropping plan but also a detailed, field-by-field cropping plan. The best way to control weeds is to prevent them from ever emerging. It all starts with an early cropping plan to identify the key issues that need to be managed during the growing season. Your local MFA team will work with you to identify your operation’s driver weeds, those that influ­ence yield or long-term weed management goals. Then, our agronomists will put a plan in place to effectively control those weeds. Oftentimes, determining your herbicide program will assist in the seed selection decision.

For example, there is no silver bullet on the market today that will control all of the driver weeds in MFA’s trade territory. Some require year-round management. Again, the easiest way to control weeds is to keep them from coming out of the ground. For weeds such as marestail, this means starting a weed-control program in the fall. The majority of marestail emerge in the fall and bolt in the spring. Once they reach the bolt­ing stage, or stem elongation, controlling them becomes significantly more difficult. An effective fall burndown will keep fields clean through the winter, making spring operations easier with a higher success rate. In a no-till situation, the next herbicide application has the capability of being more effective against smaller and fewer weeds. Even in a conventional-till situation, not having to work the ground as many times for weed con­trol saves time and money on equipment.

Even with all of the herbicide trait packages available today, if weeds are present once the beans emerge, control options are fewer, and significant yield losses are possible. Starting clean and using an effective residual followed by another residual 21 to 28 days later is the preferred method for keeping weeds in check all season long.

Selecting the right seed for the right acre is an important decision, but it is just one of the many decisions for a successful growing season. As a grower, your best investment is to reach out to your local MFA key account manager or MFA agronomist to start working on a cropping plan for next season. The greatest success comes to those who plan early and often. Effective, timely decisions have the highest rate of return. Your local MFA team is ready to take your operation to the next level.