These events give participants hands-on involvement in our testing and product evaluation process. Attendees viewed trials on MorCorn hybrids and MorSoy varieties, soybean seed treatments and foliar nutritionals. They heard presentations from experts on spreader calibration, Bt corn traits, evaluating dicamba symptomology in the field, and breakdown of herbicide modes of action for corn and soybeans.

Beyond the educational opportunities these field days provide, multiple replicated testing sites across MFA’s trade territory delivered vital data for product improvement and evaluation. Here are some summaries and results of these trials at the Training Camp site.

The MorCorn trials were planted April 13 with a total of 37 hybrids ranging from 95-day CRM (comparative relative maturity) to 117-day CRM. We tested 12 MorCorn commercial checks against 24 experimental hybrids and one competitor hybrid. The field was fertilized with 300 pounds of actual nitrogen in the form of SuperU. The planting population was 32,500 plants per acre.

Yields were impressive once again at our site. The top end hit 258 bushels per acre with an experimental hybrid and a MorCorn commercial hybrid. At the bottom was a MorCorn commercial hybrid and an experimental hybrid at 189 bushels per acre. Results from this year’s MorCorn Training Camp trials can be seen in Figures 1A and 1B. In addition to the Training Camp trials, these hybrids were tested across multiple environments and geographies in 11 other locations within MFA’s trade territory. 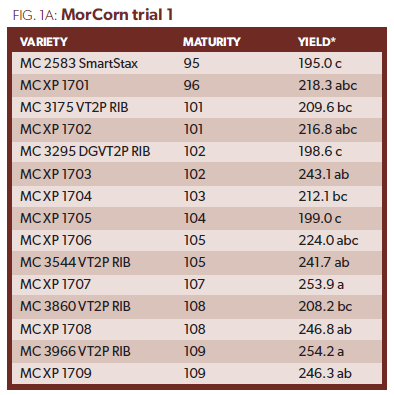 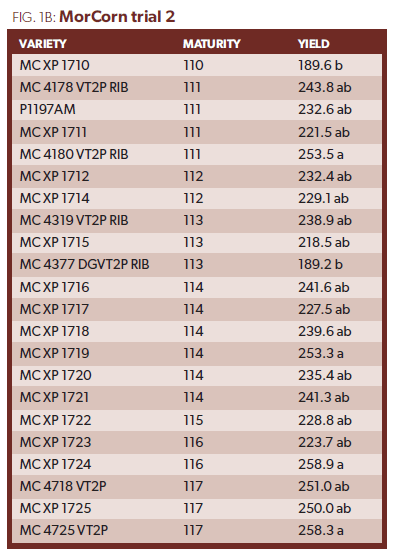 In terms of growing soybeans, the region MFA serves is very diverse, which shows in the diversity in the MorSoy line. Our soybean maturities range from group 3.0 to a group 5.0, and traits include RoundUp Ready 2 Yield Technology, RoundUp Ready Xtend and LibertyLink along with conventional varieties. The MorSoy trials were planted May 31 with 54 varieties, including 37 MorSoy commercial checks against 15 experimental varieties and two competitors. The planting population was 140,000 plants per acre. We had four trials to compare by relative maturity ranges: Trial 1 was 3.0-3.6, Trial 2 was 3.7-3.9, Trial 3 was 4.0-4.5 and Trial 4 was 4.5-5.0. The trials included all of the herbicide technology traits combined, so weed control was maintained with a sound agronomic conventional herbicide program.

In addition to Training Camp, these varieties were tested across multiple environments and geographies in 12 other locations within MFA’s trade territory. Results from this year’s MorSoy Training Camp trials can be seen in Figures 2A, 2B, 2C and 2D. 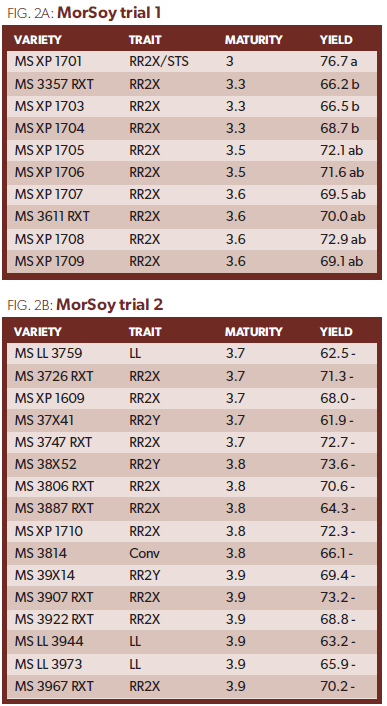 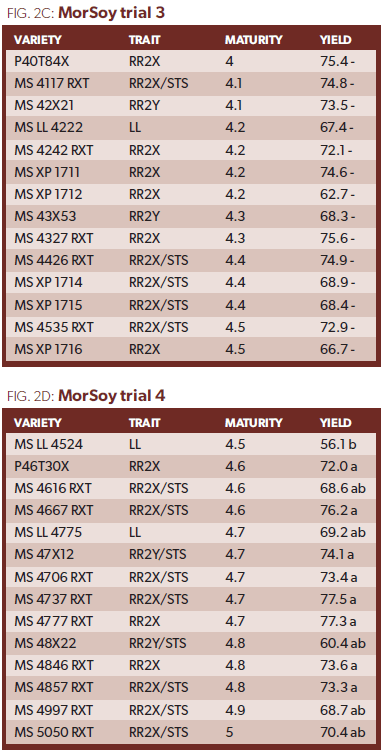 Nitrogen stabilizers used on urea such as Agrotain, SuperU and Instinct have been evaluated at Training Camp for several years. We have found it important to continue our evaluation of these products for a couple reasons. First, several products enter the marketplace each year, and many of those make claims to limit either volatility, leaching or denitrification as effectively as the products mentioned above without any proven activity when it comes to nitrogen stabilization. Second, weather conditions vary from year to year, and the different products may perform better depending on those conditions in relation to N application timing. For example, a product like Agrotain limits urea volatization; a product like Instinct stabilizes N below ground; and a product like SuperU provides protection above and below ground.

The N responses were not as great as we might expect. Much of this is likely due to the fertile nature of the testing site. However, there are some things to note from this trial. The application date of all treatments was May 12, and the field did not receive a significant rain event until 0.75 inch of precipitation on May 18. This six-day period in which the urea was on the surface unincorporated would make volatization likely. The check receiving no additional N was the only treatment statistically different from the others. Agrotain, SuperU and Source NBPT—all of which contain NBPT, the active ingredient that combats the urease enzyme and limits urea volatility—all yielded higher than products without NBPT. 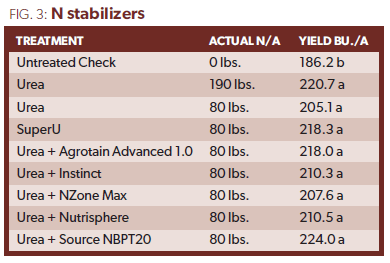 This year’s Training Camp sessions included an insect resistance management presentation focused on Bt traits in corn. Discussions included management of rootworm and corn borer through proper trait selection, but much of the talk addressed the effectiveness of Bt traits on ear-feeding caterpillars such as western bean cutworm and corn earworm. We evaluated four traits with Bt technology: VT DoublePro, SmartStax, PowerCore and Viptera, all claiming to control a wide range of Lepidoptera insects. To demonstrate the impact of cross-pollination from refuge corn on the expression of the Bt trait in the ear, we detasseled one row of corn for each of the listed traits. Adjacent to the detasseled corn, we planted non-Bt corn to see if cross-pollination would dilute the expression of the Bt protein in the ear as compared to the stalk. To ensure insect pressure, 20 ears were infested with “lab-raised” earworm larvae or eggs, but feeding from the natural population was also observed.

During Training Camp, we pulled ears from the trial to show participants the differences between traits and the impact that cross-pollination had on ear feeding. What was quickly noticed is that the lab-raised earworms did not survive, and Bt traits worked well against them. We also noticed no difference in feeding from the natural population whether a row with a certain trait was detasseled or not.

The biggest finding came in evaluating the Bt traits against non-traited corn. In all cases, except with the Viptera, ear feeding was equal to that of non-Bt corn. Feeding and live earworms were found in over 15 percent of the ears in the SmartStax, PowerCore and VT DoublePro hybrids. The Viptera, which contains a Bt protein in the yet-to-be-released Tricepta corn trait stack, showed 100 percent control of both wild and lab-raised earworm. These observations show us that at least a portion of earworm populations have developed Bt resistance. However, current technology is still helping us control corn borers, a more serious concern.

With the introduction of the new Xtend cropping system into our trade territory, we have been researching ways to reduce the risk to MFA and our member owners. For the past three years, we have looked at potential tank contamination issues. We also realized we needed to understand how off-target movement might affect yields. We established a study to look at low-dose responses of dicamba to non-Xtend soybeans. We treated soybeans with 2, 4, 6, 8, 10, 12, 14, 16, 18 and 20 ppm dicamba solutions sprayed across V3 soybeans. While evaluating the soybean variety, we noticed that the increased damage to the soybean plant correlated to the increase in ppm concentration. However, when we harvested the soybeans, we didn’t see any yield loss associated with this study. In short, the concentration of the solution was not high enough to cause yield loss in our particular situation. We will continue this study in the future, increasing our rates to a level that will show yield loss.

For the past two growing seasons, we have had a bare-ground herbicide study to show the impact of using different active ingredients (A.I.) in herbicides to control weeds in both corn and soybeans. In this trial, we worked the ground to bare soil and started with a clean seed/weed bed. Plots were then sprayed with a single-mode-of-action (MOA) herbicide for both corn and soybeans. There are 12 single MOA herbicides for corn and 14 for soybeans. The natural weed pressure was then allowed to grow. This study allowed Training Camp visitors to visualize which MOAs are actively controlling or suppressing specific weed species and determine which would be beneficial for their own area/farms. We also include a couple of plots that were sprayed with a pre-emergence herbicide containing multiple MOAs followed by a post application of a multiple MOA herbicide to show the importance of overlapping residuals.

Figure 4 shows an example of a breakdown of a given herbicide with three different modes of action. In pictures A, B and C, you can see the effect that a single mode of action has on weed population 60 days after treatment. Picture D is a herbicide containing all three MOAs 60 days after treatment. This study emphasized the importance of having multiple MOAs to protect against weeds and weed resistance. 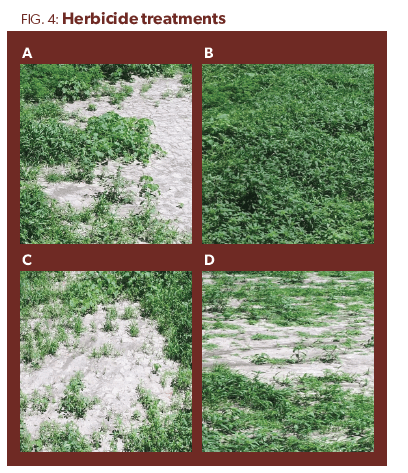 Every year, we test nitrogen rate and timing at Training Camp. In these studies, we are often evaluating performance based on timing of application preplant versus a V5-V8 topdress application versus a split application. Rates often have been determined by N models or common grower practices. This year, we looked at rates influenced by spread patterns of fertilizer application equipment to demonstrate the importance of proper calibration. We took a fertilizer truck properly calibrated to spread a DAP/potash blend and pan-tested it with urea. The pans used to catch the urea were set up on 10-foot intervals from the center and on the edge of the 70-foot pattern. The first pan test was done with a 400-pound rate of urea (184 pounds of actual N). We repeated the pan test with a topdress rate of 200 pounds of urea to demonstrate that calibrations change as application rates change. In this truck, the result of spreading a lighter product such as urea when calibrated for a heavier DAP/potash blend was a high center pattern at the 400-pound rate such as the first graph in Figure 5A. A less exaggerated “W” pattern was seen at the 200-pound rate, similar to the third graph.

We used the pan catch from both tests to determine the percentage of the target rate at different distances from center of the spread pattern to set up our trial. The corresponding rates and yield data are included in Figures 5B and 5C (on page 43).

Though the only statistical difference in yield came between the untreated and the remaining checks at both timings, the importance of a properly calibrated spreader can be seen in nitrogen-use efficiency by limiting over-application across the pattern. In a year where N responses are higher, we can assume the under-application penalty would be much greater. 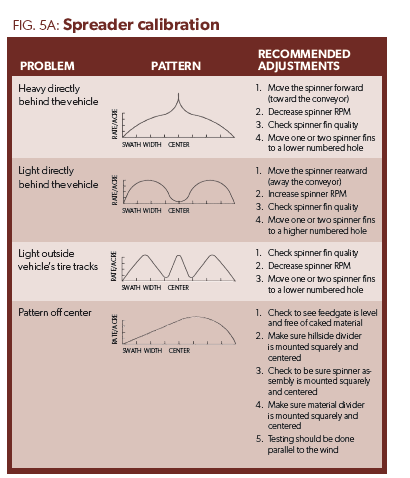 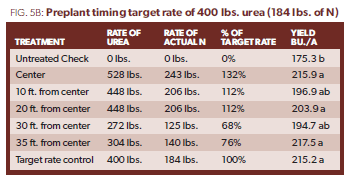