Written by Jason Worthington on October 02 2017. 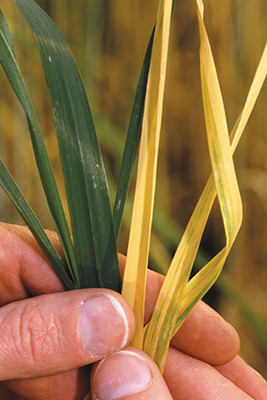 When it comes to disease control in wheat, the focus is often on fungus. Fusarium head scab, leaf rust, stripe rust and even powdery mildew receive a lot of attention from growers and crop advisors as they inspect fields through the growing season. They select appropriate fungicides and time applications to optimize disease control.

However, viral diseases in wheat are just as important—and potentially just as harmful—but more commonly overlooked. This tendency stems in part from the fact that once viral infections are discovered in wheat nothing can be done to treat them. True, but there is plenty that can be done to prevent them.

Prevention methods, of course, depend on the particular virus you are facing. For example, soil-borne mosaic and spindle streak mosaic viruses can be averted, or at least limited, by selecting resistant varieties and avoiding planting wheat into poorly drained soils. The impact of wheat streak mosaic virus can be reduced by planting late or controlling nearby volunteer wheat and other grassy weeds. This limits exposure to wheat curl mites that transmit the disease.

Aphid species such as corn leaf aphid, greenbugs, English grain aphid and, most commonly, the bird oat cherry aphid can all transmit the barley yellow dwarf virus. Symptoms of this disease include stunted plants and yellow or red leaf tips. Depending on the amount of infection and vector populations, infected areas are generally found in patches that are 1-foot to 5-foot in diameter, with the worst symptoms near the center of the affected area. As the wheat matures, infected heads tend to be darker than their healthy counterparts. Grain from infected heads is often shriveled. Yield losses can be as high as 35 percent.

This past spring, visual signs of barley yellow dwarf virus were seen quite frequently throughout Missouri, more commonly in northern areas. While last year once again proved that all areas of the state are vulnerable, typically the potential for infection is worse in the south. Later freeze dates and milder winters allow for greater aphid activity in the fall. Though the disease can infect wheat plants at any point of their life cycle, fall and winter aphids cause infections that provide much more time for the disease to develop than a spring infection.

So why were infected fields more prevalent in the north this past year? There was no shortage of infected fields in any part of the state, and aphids were prevalent far into a mild winter. The difference appears to be seed treatments. Insecticide seed treatments were much more commonly used in the southern areas, where growers are more accustomed to growing wheat and managing for barley yellow dwarf control. 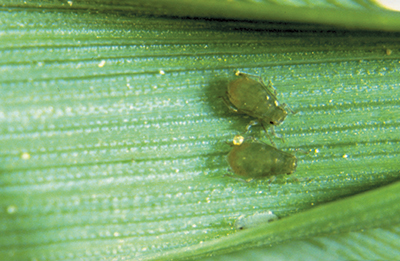 Though there are some varieties with limited resistance and delayed planting can be helpful, effective control of aphid vectors is—by far—the most reliable way to prevent barley yellow dwarf virus. Scouting and foliar-applied insecticides can help control aphids, but even then some level of infection has likely occurred. Preferably, systemic insecticide seed treatments should be used to keep aphid populations from developing in the fall. Wheat fields with insecticide-treated seed showed an obvious advantage to fields planted with untreated seed.

It is also important to note that not all seed treatments are equal. The majority of available seed treatment packages offered for wheat do not contain an insecticide. Those that do often contain an insecticide rate that’s too low to be effective against aphids. However, products like MFA’s Crop Advantage Cereals Aphid blend ensure effective control with high use rates of the systemic insecticide, imidicloparid. Products that do not have these rates need additional imidicloparid if control of aphids and, in turn, barley yellow dwarf virus is desired.

While all potential challenges in the next growing season are easier to overcome with proactive planning, when it comes to barley yellow dwarf virus control, that foresight is not just beneficial but crucial. The old saying that “an ounce of prevention is worth a pound of cure” is surely an understatement in this case. If that ounce ensures the full rate of a seed treatment, then its worth is measured in bushels rather than pounds.