Written by Jason Worthington on August 11 2017. 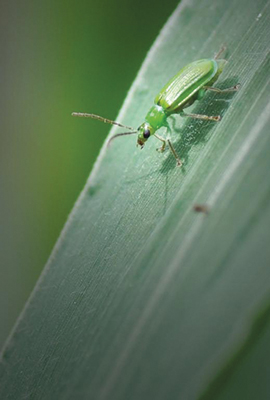 When discussing insect management with growers, the preferred strategy of management is often a “wait and see” approach. Waiting until insects are found before deciding on a management practice can be effective for some species, if a field is scouted thoroughly and frequently enough. However, this same practice falls woefully short on other species, especially when managing insects that could cause devastating yield losses or pose a predictable threat to a crop. Corn rootworm falls into both these categories.

Crop rotation traditionally controls rootworm. That’s why there has been limited concern in our area about corn rootworm pressure. Beetle eggs would hatch in the spring, but if the larvae did not find a food source (corn), they would quickly perish. The vast majority of Missouri’s corn acres are in a corn/soybean rotation, so growers were putting an insect management plan in place with their crop rotations.

However, in July 2016, MFA Crop-Trak Consultant Kevin Moore discovered the likely presence of northern corn rootworm extended diapause, a longer life cycle in which the eggs remain dormant in the soil for two years or more before hatching. Evidence of larvae and adult beetles were found in numerous corn fields in a corn/soybean rotation in Atchison, Nodaway, Holt and Worth counties in Missouri as well as Page County, Iowa. Many other parts of the U.S. already experience extended diapause rootworm and cannot count on crop rotation for control any longer.

To confirm these findings, MFA partnered with the USDA to conduct lab testing of suspect beetle populations. In these tests, eggs from collected beetles endured a simulated winter. A typical diapause, or period before eggs hatch, is one winter. In an extended diapause, rootworm eggs must endure two or more winters before hatching. After the first winter and spring of testing populations collected from northwest Missouri, only 45 percent of the eggs hatched. While it is unknown what portion of the remaining 55 percent will hatch after a second winter, it is likely a significant number of these eggs are still viable and could threaten a corn crop. At 45-percent hatch after one winter, the numbers closely resemble testing of known extended diapause rootworm populations in South Dakota.

What does this mean for growers in these areas? First, the threat could be much greater in 2018 because it’s an even number year like 2016, when the extended diapause was discovered. Methods other than crop rotation must be used to control rootworm. The most effective plans must be proactively developed along with hybrid selection.

When it comes to managing rootworm, reactive control measures will not be effective. The two real options a grower has to control rootworm are Bt corn traits with multiple effective proteins such as SmartStax, and granular in-furrow soil insecticides such as Force or Aztec. Both of these control options require planning ahead. With few planters in the state set up for dry insecticide applications, traited seed will likely be the preferred method of control. The decision to purchase seed with rootworm control traits often happens before the prior year’s harvest is even complete.

While rootworm can be devastating to a crop and extended diapause situations may keep crop rotation from protecting us, we still have options to control this pest. Just like many of our most important decisions, we will have to plan ahead to ensure success against this emerging threat.