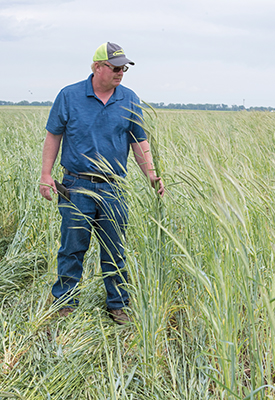 Statistics vary, but it can take hundreds to thousands of years to form an inch of topsoil—something that will never happen again in our lifetime or many generations to come. That’s why erosion control was a big factor in Davis’ decision to begin growing cover crops five years ago on his farm in Mexico, Mo.

When more than 9 inches of rain fell the last weekend of April this year, Davis realized just how well his cover crop of cereal ryegrass was working compared to fields without it.

“I had just planted a field of corn near my house, and at the end of the driveway the water flowing out of that field was just completely dirty,” Davis said. “The field of ryegrass next to it? The water running out of it was just as clear as can be. It didn’t have all that sediment and soil because the cover crop was holding it in.”

From an initial 20 acres of cover crops, Davis has now increased that number to around 200 acres out of the 1,200 he farms in total. The cover crops on his farm all precede soybeans.

“There’s no doubt cover crops are making a difference,” he added. “The soil I lose out of these fields, I’ll never get back. We have to do something to save it. I’d like to leave this farm better than what it was. Trying to do what’s good for the soil is one thing I can accomplish.”

He’s not alone in the quest to control erosion and reap other benefits of cover crops. An increasing number of growers across MFA country are embracing this practice in which normally fallow ground is planted between seasons. The cover crop is harvested, grazed or terminated in the spring before the cash crop is planted.

“We’ve seen a rapid adoption of cover crops in the area served by MFA, mainly due to erosion and water quality issues, and I think that trend will continue,” said Dr. Jason Weirich, MFA Incorporated director of agronomy. “We have a lot of rolling fields and steep hills in our geography, and we see erosion and ditches washed out every year. With cover crops, we’ve seen a reduction in soil loss. They’re very successful when used properly.” 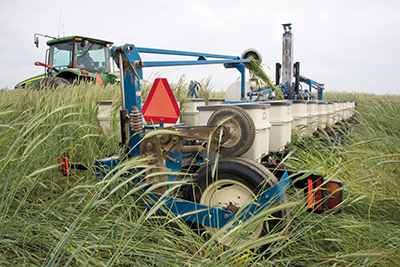 Though cover crops offer numerous other advantages, erosion control is also the top priority for Ben Anderson, who farms 1,000 acres near Boonville, Mo., with his father-in-law, Perk Hoecker. Anderson moved from Kansas to the farm with his wife, Julie, five years ago to help her father transition into retirement. The family’s hillside farm has been in continuous no-till for about 24 years, and cover crops have been an integral part of the operation for the last decade. All of their corn and soybeans now follow cover crops.

“For years, we saw a lot of our creeks running muddy, and we’d have huge washouts,” Anderson said. “This farm sits on rich glacial deposit dirt, and we got tired of seeing it go down the creek. We’ve been trying to keep that dirt here, and now our creeks are running clear. We get good water retention, too, which is huge for us in-season.”

“It’s not for everybody, but with rolling hills like ours, it’s a pretty sustainable practice,” added Anderson. “They aren’t making any more dirt, so we want to keep what’s here.”

With the loss of soil comes loss of nutrients, so controlling erosion also protects a grower’s fertilizer investment. “Any time we have water movement, yield potential is leaving that field along with the soil and nutrients,” Weirich said. 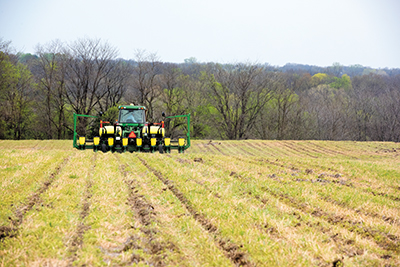 In Missouri and surrounding states, cereal rye is by far the most popular choice in cover crops, Weirich said. Both Davis and Anderson exclusively planted cereal rye this year. Other viable options for our region include triticale, wheat, radishes, turnips, oats, buckwheat, crimson clover or a mixture of several species. Italian ryegrass, however, is not recommended, Weirich warned.

“Italian ryegrass is in the Lolium family, which is the No. 1 species in the world for herbicide resistance,” he explained. “It makes a great cover crop, but it has too many risks. You don’t have any control options once it establishes and becomes resistant to herbicides.”

Along with erosion control, Davis said cover crops have helped with weed suppression and cooler soil temperatures in the heat of summer, and he expects to find improved soil health and organic matter when he samples his fields this fall. Plus, he’s seen a yield boost every year.

“Last year we planted into cover crops that were waist high,” he said. “All the beans did really good last year, and I thought there’s no way the cover crop beans could be that much better, but they were. Those beans were a good 4 to 5 bushels better than anything else we had.”

Yield increases were also reported by a majority of respondents in the 2016 Cover Crop Survey conducted by the USDA’s Sustainable Agriculture Research and Education Agency, Conservation Technology Information Center and the American Seed Trade Association. The fourth annual survey of 2,020 respondents, including a significant number from producers in MFA territory, showed modest yield gains in both corn (1.9 percent) and soybeans (2.8 percent) following the use of cover crops. Cereal rye was reported to boost soybean yields on a majority of farms, and 82 percent of those surveyed indicated that cereal rye also helped reduce weed problems—including troublesome herbicide-resistant weeds. 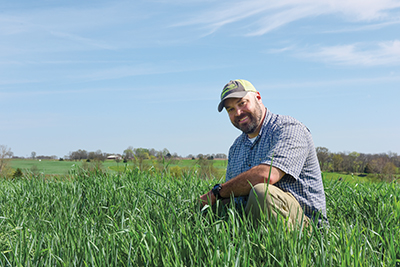 Establishing cover crops can be accomplished in several ways—typically drilling after harvest or aerial seeding into a standing crop—depending on the timing of planting and type of seed, Weirich said. Termination timing in the spring is also critical, he added, to ensure the cover crop doesn’t hinder the progress of the cash crop to follow.

“I know a lot of guys follow their combine with a drill to plant cereal rye, and that works well,” he said. “If you want to have a tillage radish or turnip, you need to overseed that into the crop. The key is making sure you get good fall growth. The more fall growth you get, the better off you’ll be by the time you terminate the crop in the spring.”

Weirich said there’s no way to make blanket recommendations for cover crops because every situation is unique. He recommends the Midwest Cover Crop Council’s website. Available at http://mccc.msu.edu, the site features interactive tools that allow growers to make decisions at the county level based on the cash crop, planting and harvest date, drainage and goals.

“You have to make decisions based on your farm and what you want to accomplish,” Weirich said. “There are a lot of different options out there, so you need to know what you’re doing. It takes management the first several years. Don’t start with the whole farm. Figure out what works for you and your farm and then go from there.”