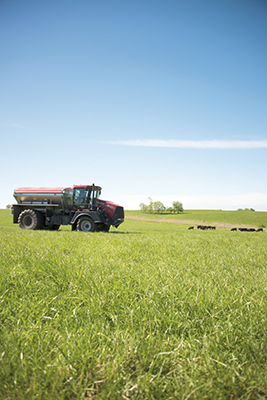 In the southern parts of MFA’s territory, producers like Billy Gourley of Gourley Land and Cattle in Ozark, Mo., are starting to think about the phosphorus and potassium levels in their fields. Split applications are popular here. By applying P and K in the fall and nitrogen in the spring, farmers in this area are able to spread out their resources, promote root growth in their pastures and ready their fields for the next season.

“When you fall fertilize,” Gourley said, “I believe you get more root growth, and your plant is healthier when it goes into dormancy through the winter. In the fall, you need that little bit of growth that comes with applying P and K because you can stockpile your grass and winter your cows without feeding as much hay.”

Gourley has about 2,000 acres of pasture enrolled in MFA’s Nutri-Track program and spreads P and K in the fall to winterize his pastures. He moved back to Ozark five years ago from Colorado to manage his family’s land. The pastures had been leased for the previous four years and needed a major overhaul. A few years ago, he attended a meeting where MFA personnel introduced grid-sampling.

“There were weeds everywhere, very little grass, no clover, no orchard grass,” Gourley said. “It was grazed to nothing. We came in with MFA and have done extensive amounts of renovation in our pastures. We’re not overgrazing. By grid-sampling and following proper soil-sampling and fertilizer programs, we’ve made leaps and bounds.”

Originally, Gourley wanted to hay his pastures. His plan was to fertilize in the spring, bale them once a year for hay, and then move in his cows to graze the rest of the time.

In working with MFA, Gourley came up with another solution. He wanted to set up an intensive rotational grazing schedule that would give his cattle the ability to graze into early winter, allowing him to feed less hay. In the winter of 2015-16, Gourley supplemented grazing with more than 1,000 round bales, but in the winter of 2016-17, he was able to cut that number by more than half.

“Better management has just made our grass go further,” Gourley said. “We actually have over twice as many head now as we did in 2015 and 2016.” 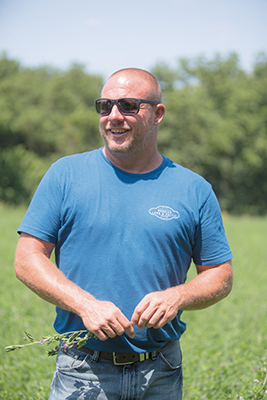 Splitting fertilizer applications between fall and spring has paid off for many producers in this area, according to Brandon Hebbert, who manages the MFA fertilizer plant in Ozark.

“P and K are not going to be mobile in your soil in the same way nitrogen is,” Hebbert explained. “So if you put it out in the fall and there’s any deficiencies, you’ve got all winter for those nutrients to start to break down and become available to the plant.”

While his location primarily applies P and K on pastures in the fall, Hebbert said some of the row-crop farmers in his area are seeing a benefit as well.

“We don’t have a lot of row crops around here, but some of the dairies have a few smaller fields,” he said. “In a lot of situations, the fertility is pretty low and they’re trying to get the most out of their yields. It takes a lot of fertilizer. By applying P and K in the fall, it helps stretch out resources for the farmer.”

Post-harvest applications of fertilizer can also give row-crop farmers flexibility when their planting window is limited, he continued.

“Like I said, most of the guys who grow corn around here are dairy farmers, so they’ve already got a lot of their time spoken for,” Hebbert said. “Sometimes, having that P and K out there already can be the difference between getting a crop in or not.”

“We want to be able to get out there and get the spreading and fertilizing done when the grower wants it,” Swadner said. “What we’ve been doing when we spread P and K in the fall kind of breaks up the normal schedule. When springtime hits, the stores are pretty busy spreading fertilizer. The variable-rate applications in the fall definitely help us to be able to provide the service to the customer when they want it.”

And, Hebbert added, it gives producers a little edge. 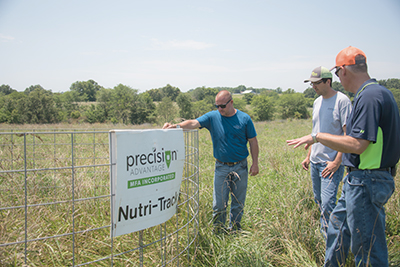 “During green-up in the spring, we’re just a step ahead,” he said. “The producers who do this already have some of their starter fertilizer out there by splitting it before they put their nitrogen down. It just allows them to get a jump start and better yield overall.”

Improving pasture management on his family’s land has helped Gourley to grow the herd exponentially. He started with 16 heifers and a bull five years ago. The herd now numbers more than 900 head of cattle total. His ultimate goal is to be able to add 300-400 more head and run one cow per every two acres without supplementing his grass with feed.

“If you fertilize right, I believe your grass is going to grow. It should also have more nutrients which, in turn, should transfer to your cattle,” Gourley said. “Since we’ve started on the Nutri-
Track program, we’ve been able to run more head of cattle on less mineral, using less fertilizer because we have our soil in shape. I think that should be where everybody starts.”

For more information on the Nutri-Track program or fall fertilization, contact your local MFA Agri Services or AGChoice location.