A light in the night 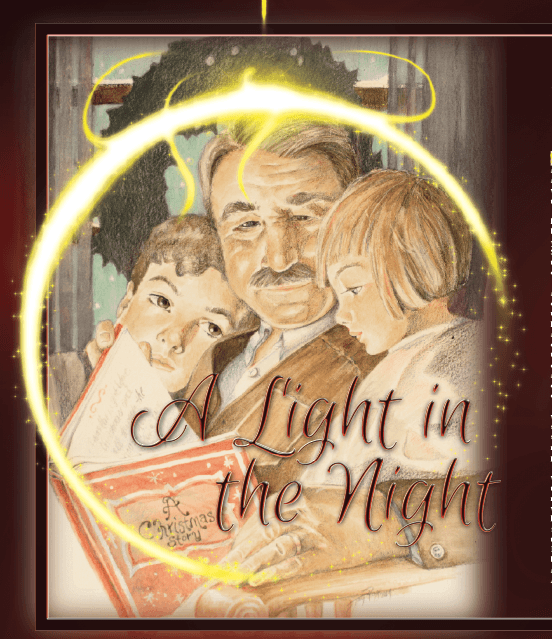 Some nights ago I traveled across Missouri via a fast mail train and as the mighty engine plunged ahead in the darkness, I sat back in a secluded seat and watched the blinking lights of farm homes here and there off in the distance.

Here, one shone out brightly and strong as if the lamp wick had been freshly trimmed and its chimney brightly burnished only a little while before, while over yonder was one that shone forth weakly and timidly.

Somehow they fascinated me, and I wondered whether these silent beacons of the night proclaimed the kind of cheer and hope that abided within.

I wondered what sort of fathers are lord and master around these lighted hearthstones; whether they are cross and surly to the sweethearts of their youth and unkind to their children; whether time has frozen their hearts and banished love and tenderness; whether they are able to forget the disappointments and failures of yesterday and turn with renewed hope and a smile toward tomorrow; whether they are alive to the wonderful, progressive age in which we live; whether they are determined to play a real man’s part in the world, or whether, dull-eyed and listless, they are aimlessly drifting with the current.

As MFA closes its 100th year we look back to our founder, William Hirth to deliver a message of thanks and hope for the season. Hirth wrote a series of essays called After Thoughts to deliver opinion and meditations to his audience. The columns were signed only as “by the author of After Thoughts.”
This essay is reprinted from Hirth’s newspaper, The Missouri Farmer’s Dec. 15, 1913 edition.

I thought of the wives and mothers, too. I wondered whether, like the light which shone so timidly their spirits were crushed and broken by unkind words and slavish toil—or whether serene contentment and the roses of buoyant health blossomed in their sweet and patient faces.

I thought of Christmas only a few days off and I wondered what sort of a Yuletide cheer will abound in these farm homes on that blessed night. In my vagrant reverie I saw this scene in the humble little home from which the bright light had streamed forth. I saw a kindly faced father sitting in an old rocking chair—his features lined and wrinkled with the never ending battle of the fields—and yet smiling and happy. In his lap I saw a couple of red-cheeked, bright-eyed children—a boy and a girl—listening with wide-eyed wonderment as he told a story of Old Kris Kringle and his reindeer. Across from him sat the sweet-faced wife, listening with that quiet smile which God Almighty paints only upon a mother’s face.

By and by, I saw the little ones hang up their stockings in childish glee. Then they knelt at their mother’s knee and repeated that sweetest of childhood’s sweet petitions, “Now I lay me down to sleep,” and after the goodnight kiss they scampered off to bed in their little ghost-like nightgowns, to dream of Santa Claus as children have dreamed for all these many centuries, in every clime and country.

Then I saw the Father and Mother sit for a little while gazing into the dying embers of the fire. The love light shone in their eyes and they were holding hands just as they used to when they were sweethearts in the long ago. Finally I saw them kneel and I thought I could hear the man murmur this reverent prayer: “Father, we thank Thee that on this holy night nearly two thousand years ago Thou gavest to the world the Little

Shepherd, at the foot of whose cross humanity may kneel and learn to hope once more. We thank Thee for the daily bread which Thou hast provided in times of famine and plenty. We thank Thee for our little ones who are sound in mind and body. We thank Thee for the good health which enables us to overcome the failure of yesterday with the success of tomorrow. We thank Thee for our beloved Country in which men and women are the arbiters of their own fortune and rejoice that we are at peace with the world—that the cannons are cold and silent and the swords sheathed in their scabbards. Help us to be useful, though humble members of society in order that we may contribute our might to the world’s progress and betterment. Teach us on this holy night to speak more kindly and softly, to smile rather than frown, to have a deeper consideration for the feelings of other, to look with renewed hope to the future and to lend a helping hand to those who falter by the wayside.”

Here’s hoping that the bright light I saw that night shone out from your home and that this picture, which came drifting into my fancy, will live in truth on that blessed night that caused the angels to sing for joy in Bethlehem centuries ago.