Going to school to come back home 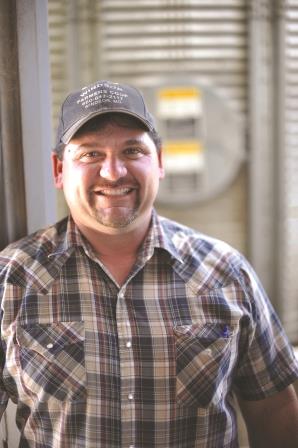 At wheat harvest time in Henry County, double crop soybeans are going in. The highways are busy with lake traffic. All told, it’s a busy time at the Windsor Farmers Co-op.

The interesting thing you notice in watching the customers come in and out is the friendly way that the staff and manager greet and help them. One of the staff, manager Matt Terry, has good reason. Windsor Farmers Co-op is part of the reason he has remained in agriculture.

“I had a few scholarships, and they made a big difference in those first two years of college,” he said. Terry grew up on a farm south of Windsor where his family still farms, and he works alongside his dad. “I’ve always had agriculture in my blood,” he said.

Now Terry’s scholarship photo from 1991 hangs on the office wall right next to sign that says he is the manager. It’s been a full circle, if one that took some wandering and experience.

Terry hopes to eventually step up to take over the farm. “I didn’t want to get too far from the farm,” he said. That 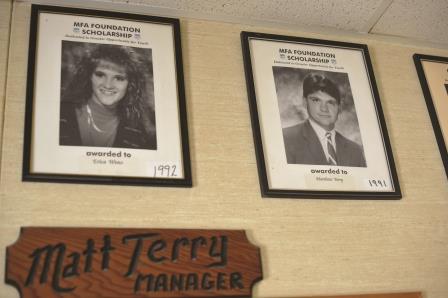 devotion to agriculture and the local community earned him a favorable call from long-time Windsor Farmers Co-op manager Bob Fosnow, who was nearing retirement. “He was looking for a younger manager to train,” said Terry. “It has worked out well.”

Now each year at graduation it is Terry handing out the MFA Foundation Scholarship. He said is an important part of his job. “I know how important college is now, and I like to see young people better themselves. You can’t have too much money when you go away to college these days, and the smaller schools have a challenge in raising scholarship money.”

Perhaps in a few decades when Terry decides it’s time to retire, he can look across the scholarship photos hanging on the Windsor Farmers Co-op wall to find a new manager. It has happened before.

Andrew Cauthorn wasn’t sure about leaving his family farm in Mexico, Mo. after high school graduation. He 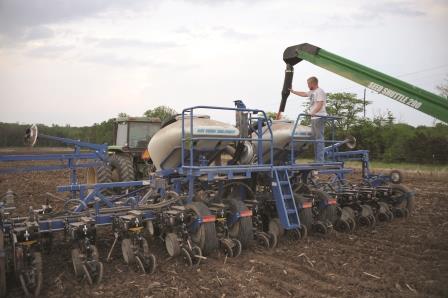 debated putting money into the farm or into tuition for college. Now a senior at University of Missouri-Columbia, Cauthorn is glad he made his choice. An agriculture systems management major and economics minor, Cauthorn said the university experience was worth it.

The MFA Board of Directors scholarship is awarded to a family member of an MFA employee. Cauthorn is the son of MFA Feed area sales manager Teresa Carlson.

Cauthorn said the $2,000 award was a valuable part of an eye-opening path in college.

“I could have just stayed on the farm but I went to the university. I’m glad for the experience,” Cauthorn said, admitting he was sheltered in his hometown.

At school, Cauthorn has kept busy as a CAFNR Student Development Team member. He got a lesson in management as noble ruler of his fraternity, Alpha Gamma Rho, for the 2013 academic year. “I learned how to deal with people and how to approach them.”

He also worked on the MU Beef Farm where he expanded his understanding of livestock operations.

As a part of his dad’s incremental retirement and Cauthorn’s taking over the farm, he is share-cropping the bulk of the acreage and is responsible for fuel and seed costs. And, Cauthorn traded a John Deere 4640 for the MX230 two years ago. 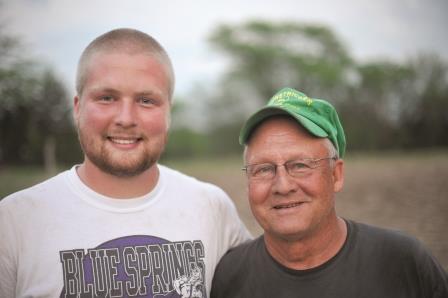 “The investment kind of pulled me into the farm, and made the farm better too.” He likes precision-ready equipment—the idea of better seed placement and reduced fuel costs. “You can eyeball a 40-foot spread fairly easily, but you don’t really know unless you step it off every time.” The costs of getting it right pay off in Cauthorn’s case, especially now that his livelihood and future farming career depend on it.

A highlight of college that blended his desire to farm with real education was “Returning to the Farm” class, he said. The class goes over the FINPACK system defined as a computerized farm planning and analysis system for Missouri farmers and agribusinesses. Users learn about the financial standing of their farm by plugging in actual data and numbers.

“You can see what your profitability on your farm is,” Cauthorn said. “For example, you rent 100 cows, and you figure price-wise, the state average, input costs, and the software; you can see if your plan would work or would be a feasible lifestyle of living you would want to have.”

When asked what part of farming Andrew liked best, he said “all of it” with no hesitation. Cauthorn is made to return to the farm.