Cutting feed cost is the quickest way to improve profitability on a livestock operation. The rate of longterm success for the average cow herd is bleak: over a 10-year average, most producers breakeven or 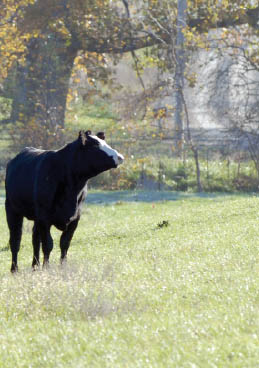 lose money. “The reality is there’s a huge difference between guys that are making money and guys that aren’t,” said University of Missouri extension specialist Wes Tucker. It is hard to envision not making money with current cattle prices. Yet while input costs have tempered, the days of cheap feedstuff are over. Management decisions and flexibility make profit. “This is an opportunity for beef producers to take advantage of a pricing structure that’s as good now as it’s been in my lifetime,” said University of Missouri extension specialist Rob Kallenbach. Tucker added, “Our beef industry was built upon cheap corn, cheap land, cheap fuel and cheap fertilizer. Feed, fuel and fertilizer will never be cheap again.”

Carrying cows is a significant cost, especially in a system that depends on using hay. According to Kallenbach, the typical cost for a mature cow to graze averages $0.50 per day. It costs $1.50 to $2 per day to harvest and feed a bale of hay to the same cow. “We can graze an animal for about one-third the cost of feeding it hay,” Kallenbach said. The main factors that drive hay costs are the labor and fuel to harvest and feed hay and the cost of equipment. Tucker said equipment, fuel and labor are profit breakers. He said that cows have four legs and are built to graze, so why not let them take care of the harvest more often?

“Delayed weaning along with creep grazing is probably the most effective grazing system.”

“Whenever that cow is eating with her head up, I’m losing money,” he said. Tucker doesn’t own much equipment, but invests in rolls of electric fence, piles of posts and fence chargers. Instead of spending time and money on hay, he rotates cattle through pastures on a regular basis. By controlling the forage intake of his cows, Tucker extends the grazing period through much of the winter.
To manage the rotation, Tucker restricts where his cows feed, forcing them to consume the available grass and reducing trampling and nutrient leaching.

“Every time a cow steps on grass, she breaks the waxy coating on fescue and nutrients leach out. So we have to control where she can go,” Tucker said. He recently acquired a 20-acre rental property that hadn’t been grazed all year, resulting in poor quality forage. Instead of turning cows out on the entire pasture, he strip-grazed the property with dry cows. This approach provided him with two months of grazing. The cows were forced to consume available forage, and the confined rotation prevented them from damaging forage in other parts of the pasture.
Managing movement

Kallenbach said studies continue to show the best way to grow and harvest the highest yields of forage is through rotational or managed grazing.

“This could be rotational stocking or grazing or it could be something that improves the efficiency of the forage we have, allowing us to grow more and harvest more,” Kallenbach said. Producers who can’t set up intensive rotational systems have options. Kallenbach said there are other methods that provide similar results. “Creep grazing is the most underused grazing technique that should be used in Missouri,” Kallenbach said. An electric wire is set high enough that calves can walk under it but cows can’t, allowing calves to access the prime forage first. “The animals that need more nutrients get the best. Then the cows get the rest,” Kallenbach said.

Kallenbach recently studied fall-calving pairs to determine how weaning and nutrition affected weight gains. He divided the pairs into four groups and conducted the study treatment in April. The first study weaned the calves and grazed them ahead of the cows. The second study didn’t wean at all. The third study weaned the calves and supplemented grain for pasture grazing. The fourth study removed cows from the pasture, resembling a stocker operation.

“The number one thing we could do to improve gains in the fall calving herd was to not wean the calves early but leave them on the cow,” Kallenbach said. Some of the calves stayed on the cow until the middle of June. “You have all that green grass that those cows can eat and the nutrition is so good that those cows will still gain weight and produce high quality milk. Delayed weaning along with creep grazing is probably the most effective grazing system,” he said. For spring-born calves, fall pastures planted with cool-season grass can increase gains post weaning. Combined with supplementation, calves can stay on the farm for 60 days post-weaning and be profitable.

Besides controlling grazing access, Kallenbach said certain practices can improve forage quality and yield. “These are things that producers already know how to do, it’s just a matter of implementing,” he said. Techniques such as adding legumes to pasture always pay, according to Kallenbach. “Legumes have more protein and more digestible energy than grasses,” he said. Mixing alfalfa with endophyte-free fescue is his favorite forage for cow/calf and stocker operations. This produces more tons of forage per acre and results in a solid grass base with no toxins.

“Not every acre on every farm will be suited to alfalfa but I would argue that on most farms, there is some that could be used for this,” he said. “It costs to the same to make a great bale of alfalfa or a poor bale of grass.”

For a quality legume stand, producers need to manage for proper soil pH and nutrient levels with a particular emphasis on the right balance of phosphorus and potassium.
Changing for the better

With cattle markets on an extended high ride, producers can profit from new approaches to management.

“In general, beef producers that are the most profitable run fewer cows than their farms can really handle. If their farm would sustain 100 cows by harvesting and feeding a lot of hay, they run 75 instead.

If they have excess forage, they background or add stockers,” Tucker said.

If producers have a dry year, they sell the calves at weaning. If they have a good year, they add weight to the calves by backgrounding, he noted.

“I will argue if we back our numbers down to what we can stock in the winter, we can be more profitable,” Tucker said.