Boost yield with a systems approach

In a beef cow-calf operation, everything starts with forage.

Most producers depend on forage to supply 80 percent or more of all feed to the herd. It’s the most economical way to go: forage the cow harvests herself is cheaper by half than the cost of forage (hay, silage) that is harvested and hauled to her. 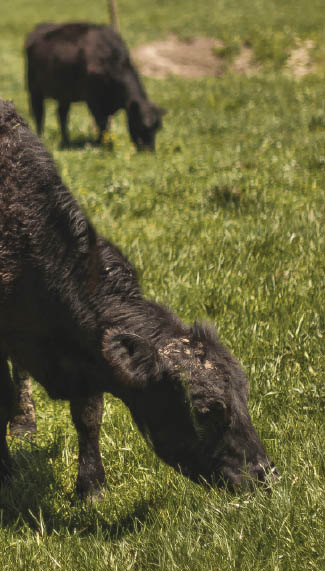 The best place to start is by whipping yield-robbing weeds and building soil nutrition. To that end, on page 14 of this issue, David Moore has outlined a strategy for controlling pasture weeds—comparing the campaign to a military “preemptive strike,” and suggesting that soil test samples be taken while the weed war is under way.

Now is a good time to start work on a long-playing forage system for next year and following years. Calf prices are at near-record highs for 2014 and can probably support some revamping of forage programs.

Some producers consider yield the most important attribute for any forage, Kallenbach said, noting that forages that do not yield well can’t be part of a productive forage program. “But annual yield alone should not be used to select forages for a pasture-based system.”

When a forage species produces can be as important as how much—and at times, more so. For example, tall fescue is a mainstay of most Midwestern pastures. It’s a tough, durable, productive grass. But fescue makes its greatest growth in spring and goes dormant in the hot weeks of summer. Ideally, fescue would be paired with or supplemented by a forage that is productive later into hot weather.

“Forages vary in their seasonal yield distribution, but no one forage is productive during all seasons of the grazing year,” said Kallenbach.

An important feature of a productive forage program for a cow-calf operation is to use the inherent differences in seasonal growth patterns to supply grazing for as much of the year as possible, without making the system so complicated that it can’t be managed.

Some forages naturally contain more energy and protein than others, but nearly any major forage can be managed for high-quality graze. The key is to keep the plants in a vegetative stage of growth to be of good enough quality for optimum beef production.

Waiting longer than this will reduce forage quality and, of course, beef production. But keeping grass in a vegetative stage of growth can be difficult, especially with cool season grasses in late spring, when grasses outgrow the pace at which the herd can eat. Pastures or paddocks that become more mature than the above recommendation can be cut for hay or silage and then worked back into the grazing rotation as the grass regrows to the optimum height.

It’s important to understand what mechanism a forage species uses to persist in the stand. Considering that it costs $150 per acre or more to renovate a pasture or establish a new forage, it pays to make stands last and keep them persistently productive.

With some species, stand persistence may depend on the survival of individual pasture plants. In others, it may involve the natural reseeding ability of a species—take annual lespedeza for example. What’s important to know is what mechanism the grasses and legumes in your pasture use to persist in the stand. Kallenbach pointed out that birdsfoot trefoil is a high-quality but short-lived perennial legume. It’s short-lived because it is susceptible to several root and crown rot diseases.

“But if birdsfoot trefoil is given a 45 to 60 day rest period to reseed every other year, stands can last almost indefinitely,” said Kallenbach.

Understanding how your forages persist, and managing them accordingly, is a major key to keeping them in the stand and keeping them productive. Not many forages can tolerate poor management and still produce cattle to their potential.