You can take control and reduce volatilization

Ammonium nitrate fertilizer is a commonly used source of nitrogen for producers in MFA’s trade territory. From an agronomic viewpoint, I have asked myself why ammonium nitrate is important for agriculture as well as given some thought about what products could be used in its place.

If you ask a producer in southwest Missouri what ammonium nitrate is best for, the answer is that it’s a good source of nitrogen for crops and especially pasture. If you ask that same question to someone in West Texas or Oklahoma City, they may have a different opinion on ammonium nitrate and its use.

So, agronomically speaking, why do we use ammonium nitrate? The most important thing to consider is the relationship between plants and nitrogen is absorption. Ammonium nitrate has a chemical formula of NH4NO3. The forms in which the plants can absorb nitrogen are NH4 and NO3. This means that the plant can easily take up these compounds. There is no need for this source to be converted into a form the plant can use—and it is water-soluble. A factor that endears ammonium nitrate to growers is that it isn’t lost through volatilization. If you use alternate sources of nitrogen such as urea, volatilization is a major economic and agronomic concern.

Surface-applied urea and UAN tend to be more volatile than ammonium nitrate.

Ammonia volatilization is the loss of free ammonia to the atmosphere. It’s a process of several steps. First, an enzyme (urease) present in the soil and organic residue acts on urea and converts it to an unstable form. This unstable form can quickly change to ammonia and carbon dioxide. With ideal conditions, this unstable form is converted to ammonium and is available for plant take up. 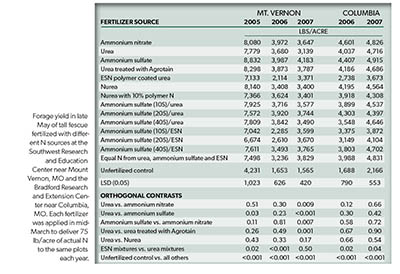 However, when conditions are less than ideal, the ammonia can be lost into the atmosphere. Factors that influence this process are urease activity, temperature, soil moisture, application method, soil pH, and cation exchange capacity.

The greatest potential for loss occurs when there is high amounts of residue on the soil surface and the nitrogen source is applied to the field surface. In MFA’s trade territory, the most common concern I hear from growers is about how much nitrogen they have lost when an application is followed by a week of hot, windy and dry days.

Research shows that the potential for nitrogen losses through ammonia volatilization can be reduced when using a urease inhibitor to slow or delay hydrolysis. Slowing this process gives Mother Nature a chance to provide a rainfall event that moves urea into the soil. The most effective inhibitor currently available is Agrotain (nBTPT). Knowing that, a common question I hear is: just how much yield benefit is there from urea with Agrotain compared to plain urea?

My answer is sifted through several caveats: If you are putting out the same units of nitrogen and suffer no loss from volatilization, the yield will be the same. However, if conditions are favorable for volatilization, you will end up with more available nitrogen by using Agrotain. You shouldn’t expect to see higher yields just because you use Agrotain, but you can expect to reduce the amount of nitrogen loss caused by volatilization. Nitrogen is one factor among many when it comes to yield.

Dr. Jason Weirich is director of Agronomy for MFA Incorporated, contact at This email address is being protected from spambots. You need JavaScript enabled to view it..