From hills to grills

Made in TF Country: Belle, MO

These long afternoons are ideal for grilling in the backyard, on the porch or the patio. And if you’re cooking your burgers, brats or hotdogs with real charcoal, chances are two out of three that the fuel was made in the Ozark hills.

A decade or so ago, the U.S. Forest Service estimated that there were 2,000 charcoal-producing kilns in the country—more than 300 of them in the hills of southern Missouri and northern Arkansas. Most of these were of the so-called Missouri-type kiln, box-like structures usually built of concrete and steel. 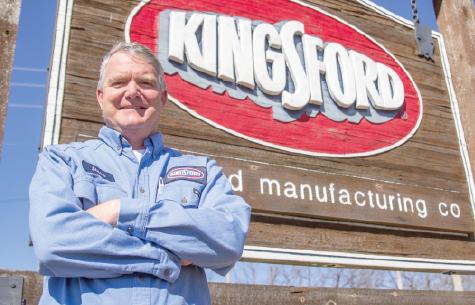 Wood (usually sawmill waste) is stacked into the kiln, ignited and allowed to burn with a limited supply of air. When it is done properly, the wood turns to virtually pure carbon by a process called “pyrolysis,” as the lighter, more volatile components are driven off by the heat.

While any kind of carbonaceous material can be turned into charcoal, better quality charcoal is made from hardwoods. Oak, hickory, etc., are the preferred feedstocks. These produce charcoal with better aroma and lower sulfur content.

They also produce a lot of dense, moist smoke. Enter the EPA and state Clean Air Commissions. In the late 1990s, these agencies began tightening regulations on charcoal kiln emissions. Since then, most of the smaller “mom-and-pop” charcoal operations have been bought by or merged with other producers or have simply gone out of business.

Kingsford is a major supplier of charcoal briquettes in the U.S., and has an interesting history of its own. The company was established nearly 100 years ago by Henry Ford (yes, that Henry Ford). A lot of wood went into building the Model T, not just in the vehicle itself but also in patterns and modeling. Henry Ford deplored waste and looked around for a way to turn all those wood scraps into a marketable commodity. He built a charcoal plant, originally called Ford Charcoal. A few years later, a Ford relative, E.G. Kingsford, took over the operation and the company was renamed in his honor.

In 1955, Kingsford built the plant near Belle, Mo. Today, the Kingsford business, which is owned by the Clorox Company, operates four other charcoal production facilities in Kentucky, West Virginia and Oregon, all of which turn more than a million tons of wood scraps into charcoal briquettes annually and is the No. 1 seller of grill charcoal in the country.

The Belle plant employs about 110 people who produce and ship more than 100,000 tons of charcoal each year. While older-style kilns char solid sawmill waste in batches, Kingsford’s modern plant carbonizes hardwood sawdust in a “flow-through” cylindrical retort. Dried sawdust goes in one end, finished charcoal comes out the other. Smoke and volatile vapors are burned in a large “after burner” which reaches nearly 2,000 degrees F.

“We recover the heat from this process, which provides the energy to dry the sawdust initially, form the finished charcoal into briquettes [using starch as a binder] and dry the briquettes,” said Miller. “It’s close to a self-contained process.”

And it more than meets current air quality standards.

So, when you barbecue that steak this summer, give a nod to the people who made the charcoal—out of materials sawmills had to get rid of anyway.