Down from the high ground

Expect volatility in the soybean and corn markets over the next five years, said Pat Westhoff, director of the University of Missouri Food and Agricultural Policy Research Institute.

Look for corn prices to drop to $4 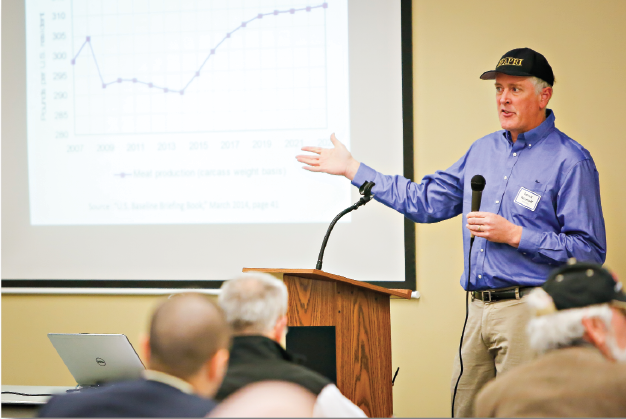 per bushel and soybean to $10 per bushel on average for the next five years, he said. Net farm income is expected to drop 24 percent in the next year.

Concerns loom about a changing global economy due to unrest in Ukraine and other parts of the world, he said. Changes in the new farm bill, the Agricultural Act of 2014, also create “lots and lots of uncertainty.”

U.S. grain production increased by 50 percent from 1993 to 2013, Westhoff said. World production of grains and oilseeds increased sharply in 2013, rebounding from the 2012 U.S. drought. Stocks continued to build as global production exceeded consumption.

Corn prices peaked at $6.89 per bushel for the drought-reduced crop harvested in 2012. Prices predicted for 2014-2018 are $4.08 per bushel. Corn drops considerably from last year’s level and then remains relatively constant through 2018.

“Believe it or not, 2012, a drought year, was the best net return year for corn growers. Not for Missouri, where yields were especially low, but for the nation,” Westhoff said. For the average U.S. producer, high prices and crop insurance indemnities offset the lower yields.

Westhoff projects that there will be less corn produced this year as farmers shift corn acres to soybean. Corn acres this year drop by 4.1 million, with an expected 91.3 million acres planted in 2014.
More yield per acre and more beginning stock continue to push prices down in 2014.

Soybean prices also take a hit. Peaking at $14.40 per bushel in 2012-2013, soybean drops to an average of $9.76 for 2014-2018. Bean acreage is expected to increase by 2.2 million acres to 78.7 million acres. Lower prices and returns could slightly reduce the total amount of land planted to corn, soybeans and other crops in 2014. However, adverse weather kept farmers from planting some acres in 2013, so if conditions are more favorable this spring, that could push acreage higher. The good news is that input costs may increase only moderately.

The effect of the new farm bill remains unknown, Westhoff said. Crop insurance payments become an important part of the program. Since the value of crops drops, the budgetary  cost may be less. Taxpayers subsidize about 62 percent of the cost of crop insurance premiums.

Net farm income in 2014 is projected to decline by more than 24 percent ($30 billion) from 2013 as sharply lower crop prices and reduced government payments offset the impact of strong cattle and milk prices and a slight reduction in production costs.

FAPRI is part of the Division of Applied Social Sciences in the MU College of Agriculture, Food and Natural Resources. The baseline report is based upon work supported by the USDA and upon information available in January 2014.