Missouri Cattlemen’s outgoing president is dedicated to the industry 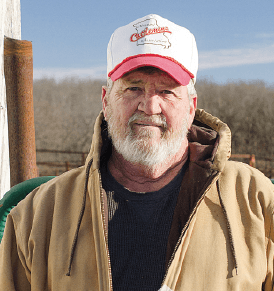 Volunteering is a way of life for Chuck Massengill. He lives to make other people’s lives better. “I was taught you do what company wants—their need is top priority,” he said. Massengill said he is involved in too many things, but it satisfies him to payback for the good he has experienced. This Kansas raised cowboy believes his success resulted from good people and luck. Hard work was instilled in Massengill at a young age and he believes it gives value to a person’s life.

That hard work helped Massengill develop an impressive resume, including Navy medic, veterinarian and most recently, president of the Missouri Cattleman’s Association. Amidst all Massengill has accomplished in his life, he said this position is his biggest honor. Massengill said it is important to ensure producers’ ability to raise beef, and for consumers to understand where their food comes from. Massengill had prepared for this opportunity for two years prior while serving as second vice president and first vice president before elected to the president office. His term ends at the MCA convention in January 2014. “It’s such an honor to be able to represent the cattle producers and the whole beef industry in Missouri. It’s an opportunity to have an impact on how we deal with all the things cattlemen are involved with,” he said.

In addition to his state and national involvement with the cattleman’s association, Massengill has served on the county Farm Bureau board, and works with the Missouri Veterinary Medical Association and US Animal Health Association. “I do anything that would allow me to give back,” he said.

One way or another

The easy route never appealed to Massengill. Dedication and persistence have earned him rewards. Massengill dropped out of high school at 17 and enlisted in the Navy. “I needed more of a challenge,” he said. He earned his GED and within a year after joining the service he married. Two weeks later doctors diagnosed his new wife with lymphoma. The medical bills would be too much for Massengill to handle on his own so he stayed in the service to ensure his wife could receive treatment. After three years she died at 22 years of age.

While stationed in San Diego, Massengill decided to pursue his childhood dream of becoming a veterinarian. “Being a vet is a way to provide and care for people through their animals,” he said. He registered for pre-vet courses at the University of California-San Diego only to find out his GED alone wouldn’t suffice. Dauntless, Massengill took the required courses to obtain a high school diploma and graduated high school—at age 23.

Still in the Navy, he was deployed to serve in the West Pacific on the USS Ticonderoga in the late 1960s and acted as pharmacist for the ship. His professional service and dedication earned him recognition from the U.S. Navy Admiral of the Pacific Fleet and the U.S. Marine Corps Lieutenant General for his later service in Vietnam. While serving in southeast Asia, Massengill became fluent in reading, writing and speaking Vietnamese. He worked as an interpreter and English teacher, developing an appreciation for people. He learned to welcome difficult situations. “If it was tough and challenging, I liked it,” Massengill said.

After finishing his naval service, Massengill returned to the States and considered pursuing a degree as a physician’s assistant, but instead started his pre-vet training. He moved back to Kansas to attend vet school in Manhattan, only to find he was considered a non-resident. Making Kansas home again, he regained resident status and enrolled in the Kansas State University veterinary program. Massengill graduated with a veterinary degree a few months before turning 35. “The average age of my freshman vet school class was 26-and-a-half years old. Several of us were in our 30s,” Massengill said. “We approached education not to get a grade, but to get experience.”

Instead of joining on with other vets, five of the students, including Massengill, took their previous work experience and started their own practices. Massengill started a clinic in Osceola, Mo., where he served for eight years before taking over as the epidemiologist and laboratory director for the Missouri Department of Agriculture. It was during his time in Osceola that he married his second wife Rose.

“I left my private practice because of the physical wear on my body. My wife Rose and I wanted to have our own cowherd. I couldn’t really do that while running my own practice,” he said. In 2009, he left the department of agriculture and started a veterinary consulting business.

Through his consulting business, Massengill has worked with U.S. and Mexico compliance for feeder cattle exports. He has also done animal health work in Vietnam. In fact, he has visited Vietnam four times since leaving the Navy and intends to go back.

Massengill believes his choices in life have all benefited him. “We are a product of all our experience. You never give up,” he said. The self-discipline and teamwork he learned in the military made Massengill a skilled leader and dedicated volunteer. “All those little pieces [of life] helped me deal with not only the next piece, but every piece following,” he said. “I am what I am. I mean what I say. I can’t put myself first.”