Written by Steve Fairchild on February 11 2014.

MFA celebrated more than the end of another fiscal year on Nov. 19, 2013. The cooperative focused its annual meeting on the fact MFA turns 100 in March 2014.

In his address to attending MFA members and guests, MFA president and CEO Bill Streeter said, “The first highlight is that the company will have been in business for 100 years on March 10, 2014.” Streeter went on to name many of the milestones MFA has met along the way. From the formation of creameries, produce exchanges, grain and fertilizer facilities to the modern and high-tech efforts of today’s MFA, Streeter’s list revealed your cooperative as a strong force in agriculture both past and present. 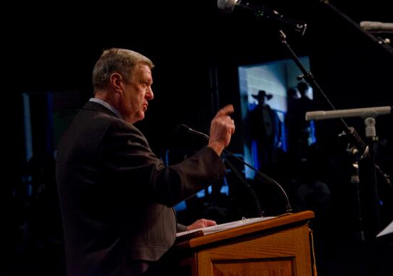 Streeter finished his address by offering the members in attendance his vision for the path forward:

We will never lose sight of the fact that this is what we’re about: serving the farmer at reasonable returns.

Streeter closed by noting that MFA is the oldest regional farm supply and marketing co-op in the United States and asking MFA employees and members to join him in ensuring the cooperative is still serving farmers 100 years from now. 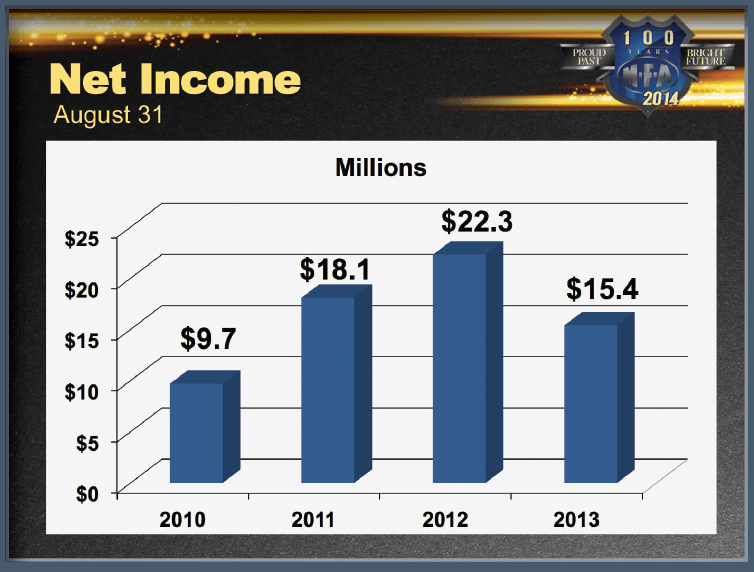 MFA’s CFO, Ernie Verslues, reported that MFA’s net profit for the fiscal year was $15.4 million compared to $22.3 million in 2012. Total sales for the year increased to $1.45 billion, an increase of $38 million from the previous year.

“As always, grain sales are driven by weather. It sets both volume and value,” said Verslues. He noted that 2013 volume was impacted by drought over a large part of the MFA trade territory, which pulled yield down as much as 15 to 20 percent.

MFA originates grain in northeast Arkansas, south central Iowa and southeast Kansas, but the state of Missouri is the largest geography for the cooperative’s grain operations. While Missouri corn and soybean harvest was affected by significantly dry conditions in 2012, MFA held onto a very good marketshare of the grain moving in its territory. 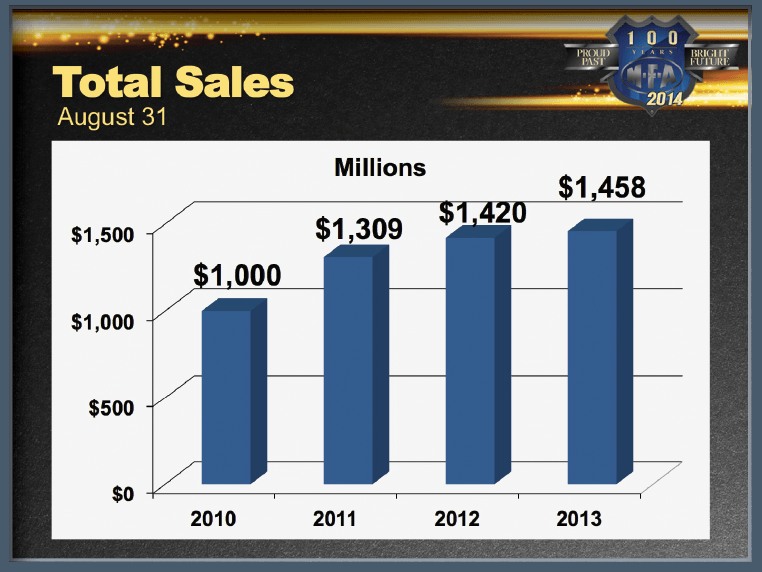 Verslues said from a feed standpoint, however, sales figures are impacted by commodity values. “A better comparison of performance is complete feed tons,” he said. Verslues pointed out that 2013 complete feed tons sold were at the same level as in 2010, at 325,000 tons. While tonnage sold grew slightly to 335,000 tons in-between those years, the general flat sales are indicative of a shrinking feed market. With herd reduction as severe as it has been in recent years, flat tonnage sales actually indicate market share growth.

Livestock Supply also includes a line for “other sales,” which includes hardware, lumber and miscellany. Sales for that category totaled have remained steady, approaching $11 million. 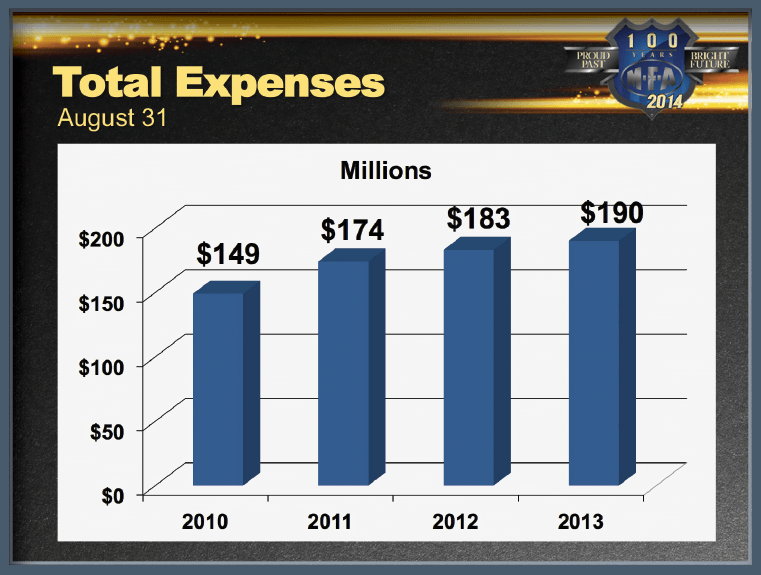 Product margins, service revenues, joint venture earnings and patronage combined for $205 million. After a couple years of solid growth, this represents a leveling off.

Looking at those margins by segment, Verslues pointed out that grain margins and revenue were down due to reduced volume of grain moving in the trade territory. Likewise, volume and margins in livestock supply were down, reflecting pricing pressure and reduced volume from a smaller herd.

Crop input margins reflected growth in line with the sales increases from a year prior.

Patronage in regional and other cooperatives including AGP and MFA Oil Company were up slightly from a year ago.

Fiscal 2013 also included a $1.1 million gain on the sale of the Marshall Research property and its hog operations. In the past three years, MFA has moved from owning hogs to a contract operator to selling the entire facility. MFA is no longer in the hog business.

Verslues said that each year there are three categories accounting for about 75 percent of operating expenses—car and truck expenses; repairs and maintenance; and personnel costs. As has been the trend, higher fuel costs, employee merit pay increases and facility improvements are the main factors for these expenses. Verslues said that agriculture remains a capital intensive industry, but that, “we will always strive to have facilities that look good, equipment that is reliable and competent and energetic employees.”

Fixed expenses (depreciation, insurance, interest and taxes) have declined by 27 percent in the past two years. Verslues said the decrease is attributed to larger amounts of producer prepay activity, an increase in unsettled grain and favorable interest rates from improved financial conditions.

Fixed assets (land, buildings, equipment and certain rolling stock) totaled $90 million compared to $87 million the previous year, an increase of $3 million. After reduced capital expenditures in 2010 and 2011, MFA continues to dedicate significant capital to upgrade facilities and equipment as well as acquire assets in new geography. Overall, capital expenditures were steady from the previous year at $23 million, with the bulk of the category spent on ongoing operations.

Total assets have been on a flat trend since 2009, on average slightly less than $400 million. Fiscal year 2012 was an exception to that rule due to an early harvest that drove grain inventories up significantly. For fiscal year 2013, total assets were $412 compared to $506 million for 2012.

Long-term debt includes term loans with CoBank and MFA’s bond program. There has been a general increase in the bond program in recent years. Verslues pointed out that the bond program gives MFA access to long-term non-bank financing. MFA members and Missouri residents have invested considerable cash in MFA during the past three years. Verslues pointed out that in the current economic conditions these bond investments have resulted in interest rates that are favorable for MFA and returns on investment that are favorable to bond holders.

“We don’t promote the bonds,” said Verslues. “Most of the sales have sought us out. This growth shows these investors have a great deal of confidence in the company. The bonds are unsecured.”
Net worth increased in 2013 to total $142 million compared to $133 million the previous year. “Net worth is another good trend line back to 2009,” said Verslues. This amount reflects the amount of the company owned by farmer/members. As of Aug. 31, 2013—the end of the fiscal year—ownership was 34 percent.
“While the level of ownerships continues to improve,” said Verslues, “our target is 40 percent.”
“Thanks to the continued support and patronage of you, the members, MFA has enjoyed a string of three profitable years,” said Verslues. “The result is a stronger balance sheet. The company recognizes this, and our lenders recognize it. Profitability allows the company to withstand volatility in the market place, and it allows us to take advantage of opportunities that arise.”

For the first time since 2008, MFA will pay patronage. Verslues said MFA by-laws  stipulate that patronage is paid on tax earnings. For MFA in 2013, total pre-tax earnings were $19.3 million. Of that, $3.5 million was non-patronage income from joint ventures, which is not eligible for distribution. Some $5.9 million of the total was from patronage-sourced business done with non-members, which isn’t eligible for distribution. There are tax adjustments of $3.8 million (of which $2.1 million was net operating loss carryover, which is now exhausted).

Thus, of the total earnings, there is $6.1 million available for distribution to members. The board voted to make patronage distribution of that amount.

Cash patronage will be paid at 75 percent of the total ($4.5 million). The remaining 25 percent will be in allocated equities. 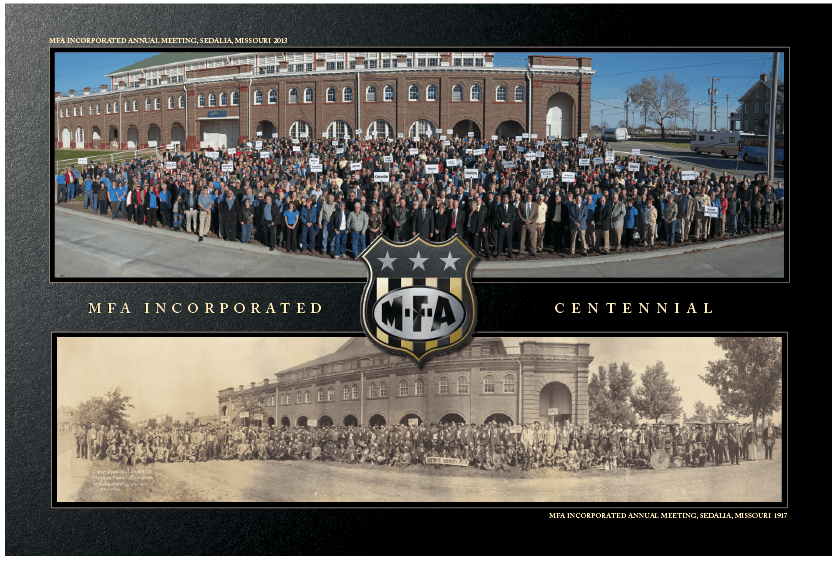 This year's annual meeting kicked off MFA's celebration for the upcoming 100th year. The business meeting convened at the Missouri State Fairgrounds in Sedalia and began with the National Anthem performed by the 2013 Miss Missouri, Shelby Ringdahl. Missouri Governor Jay Nixon and Senator Roy Blunt both spoke briefly to commend MFA. Chairman of the Board Don Mills and President/CEO Bill Streeter spoke at the event as well.

The event culminated with recreation of the historic original panorama image of 1914. Click HERE to view a zoomable, taggable printable version of both images.