Written by Allison Jenkins on December 14 2022. 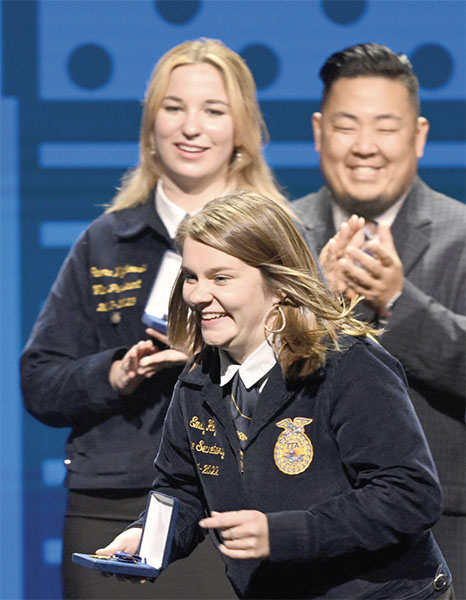 Trenton Jones of the Higginsville FFA Chapter was tops in the nation for Diversified Horticulture. He works at C&M Farms greenhouse and operates his own plant store, Trent’s Tropicals, which he started in his backyard by selling exotic plants on social media.

During the national convention, Missouri members were also awarded 582 American FFA Degrees, the most from any state in 2022. Less than one-half of 1% of all FFA members earn this top individual honor given by the organization.

In 2022, a total of 35 Missouri chapters received the highest available rating, three stars, with the Blue Springs FFA chapter named as a “Premier Chapter: Building Communities” national finalist. Centralia FFA was selected to represent Missouri in the “Hall of States,” an exhibit that provides members the opportunity to learn about various agricultural industries through interactive booths created by FFA chapters across the nation.
Nine Missourians were also awarded Honorary American FFA Degrees, which are given to individuals who have provided exceptional service on a national level to agriculture, agricultural education or FFA. This year’s recipients are Dave Baker of Columbia, the late Edward Hager of Eugene, Eddie Sydenstricker of Mexico, Aimee Hood of O’Fallon, Mindy McDermott of St. Louis, McKenzie Conner of Neosho, and agricultural teachers Sherry Byram of Owensville and Sarah Peterson of Mansfield.

FFA student enrollment is now at a record high of 850,823 members, an increase of 15% from last year. In addition, chapter numbers increased by 178 over the past year, numbering 8,995 in the United States, Puerto Rico and the U.S. Virgin Islands. Missouri has 26,260 members from 353 chapters, ranking it eighth in national membership.

A full list of this year’s award winners and event results are available at www.ffa.org/95th-convention-event-results.