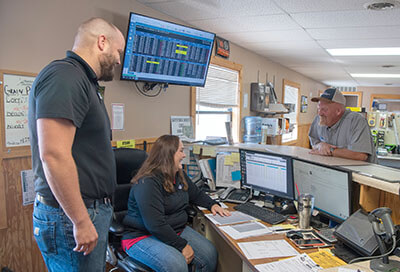 Since the new, integrated Merchant Grain software went online, the process of buying and selling grain has been much smoother, says Tosha Alexander, center, bookkeeper at MFA Agri Services in Sweet Springs, Mo., and Manager Dan Tate, right, agrees. Tyler Verslues, left, MFA field accountant, helped oversee the Merchant Grain implementation at this store as well as the last few locations that were converted to the updated platform in July.A major milestone for MFA came in late July with the conversion of the last of the company’s grain operations to the new Merchant Grain software system.

It was the final achievement in a large-scale endeavor that began in late 2012 to replace MFA’s outdated mainframe computer with modern software that would integrate all of the company’s business processes. An implementation team of MFA employees worked with EFC Systems, a software development company based in Brentwood, Tenn., to customize the platforms to fit MFA’s hybrid structure of company-owned stores, local affiliates and whole­sale operations. The process included converting wholesale operations to EFC’s Vanguard system and retail operations to a program called Merchant Ag.

After Merchant Ag deployment was completed in February 2019, work shifted to de­veloping the complementary Merchant Grain program to handle the intricacies of MFA’s grain marketing operations. The software was completed in 2020 and rolled out in stages to ensure adequate technical support. The final locations were converted to Merchant Grain on July 29, wrapping up a process nearly a decade in the making.

“The way we handle grain made developing that part of the software much more difficult,” said Lori Kahler, MFA retail accounting manager, who supervised the Merchant Grain Con­version Team. “MFA centralizes grain hedging but records profitability at the location level. We needed a system that could accommodate all the complexities of our system.”

Collaborating with EFC and MFA’s Information Technology Department, Craig Poppinga, MFA manager of accounting services, and Brenda Imhoff, manager of Agri Services computer information systems, led the Merchant Grain development team along with MFA field accountants, who helped to test the new platform and train employees to use it. Their hands-on involvement ensured that the software offered all the functionality, flexibility and features that MFA required for its grain operations.

“Creating a company-wide, one-database system gives the Grain De­partment the ability to see and hedge grain quantities immediately rather than waiting on a phone call from the locations requesting the home office to place hedges,” Poppinga said. “They can now key in contracts for the loca­tions, reducing calls and duplication of efforts.”

On the operational side, Merchant Grain has streamlined other processes for marketing, reporting and account­ing, such as making settlements, recording grades, moving customers’ grain obligations and tracking daily position reports.

For customers, the benefits include improved access to their grain accounts and detailed reports to assist in finan­cial planning. Patrons have the option of emailed delivery of tickets and contracts, and Merchant Grain records are readily available through the online customer portal.

“The biggest benefit to customers is the real-time aspect of this system,” said Tyler Verslues, MFA field accoun­tant who helped oversee some of the first and last locations converted to Merchant Grain. “Customers can drive off the scale and see their grain tickets and contract balances online. They don’t have to keep track of it them­selves or wait until the store gets all the tickets loaded into the computer.”

With 15 years of experience in handling grain transactions, Tosha Alexander, bookkeeper at MFA Agri Services in Sweet Springs, Mo., was tapped to help test Merchant Grain as it was being developed. While admitting that the new system takes some acclimation for those who are used to the “old” way, Alexander said the benefits to both the company and its custom­ers are worth the time it takes to get past the learning curve.

“The versatility of this program is endless,” she said. “I’m super excited about the potential it brings to the farmer. It reaches out like a vine with branches into every little part of their account. We can see what they’ve bought and sold and run detailed reports. And custom­ers can access all their grain infor­mation through the online portal, which is something they couldn’t do before.”

Although transactions in Mer­chant Grain may take a little longer on the front end to access a cus­tomer’s account and create a ticket, Alexander said it greatly reduces workload on the back end.

“We’re doing everything as the trucks cross the scale, instead of having to hand-stamp the tickets and then spend more time keying them into the computer at the end of the day,” Alexander said. “Before, I’d mentally have to keep track of who sold what until I got all those tickets entered. When everyone’s running nonstop, it could be over­whelming. With the new system, when you’re done, you’re done.”

Plus, Merchant offers the ability to easily make changes to grain tickets, including correcting cus­tomer names, altering status, split­ting transactions, adding grades or making important notations. In the old system, Alexander said, making such changes was a cumbersome process, often requiring the ticket to be voided and rekeyed.

While the software was in development, grain transactions were recorded on MFA’s “legacy” system, a 26-year-old, DOS-based mainframe computer that will be retired after a few more programs are converted to Merchant. That’s good news for Verslues, who said he’s looking forward to having all the locations he works with on the same platform.

“From an accounting standpoint, having everyone on Merchant is awesome,” Verslues said. “For two years, some of my stores were on the old system, and some were on the new one. I think we will be a lot more efficient on the accounting and financial side of our business now that we’re all on the same page.”

Indeed, Kahler said, getting all locations on the Merchant platform is a tremendous accomplishment, but the full extent of abilities and advantages are yet to be realized.

“This will be the first harvest sea­son that Merchant Grain has been fully deployed, and all the stores are doing really well with it,” she said. “There’s still some work to be done, making processes smoother and that sort of thing, but the biggest part of our job is done. However, I don’t think we’ll see the whole picture until have an entire year under the new system. Then, we’ll truly realize just how much this means to MFA and our customers.”