After treatment, Kuda’s pond is now clear, even reflective. He estimates this pond is over 40 years old. Because aging ponds collect nutrients over time, they often require management of existing plants.

MFA offers many products for pond management such as Ocean Blue and Crystal Blue pond dyes to improve color and clarity.

Kuda and his son spent many hours in this boat raking filamentous algae out of the pond.

A small amount of filamentous algae remains around the banks of Kuda’s pond. According to Williams, aquatic plants are necessary for healthy fish populations, but management is key.

As summer sets in, landscapes across the Midwest come alive. Lightning bugs flicker across the fields in harmony with the crickets’ song. Sitting on the banks of any lake or pond with a fishing pole in hand becomes a favorite pastime. It’s a living ecosystem doing its summer thing.

Flash forward a few weeks. The air is sticky, stagnant. The algae, duckweed and unwanted vegetation are now vying for total control of that once-beautiful basin. It’s still an ecosystem brimming with life, but perhaps green pond scum isn’t the vision for your own aquatic reprieve.

Bruce Kuda and his wife, Gina, would agree. They own 75 acres near Russellville, Mo., where they raise registered Limousin cattle. They purchased the farm nearly six years ago and use the one-acre pond on the property primarily for recreational fishing.

It’s an old pond, built nearly 40 years ago, Kuda estimates, and it’s stocked with largemouth bass, flathead catfish, crappie and hybrid bluegill. Fully fenced, the pond sits away from Kuda’s rotationally grazed pastures, allowing him to keep both cattle and the nutrients that come with raising livestock away from its banks.

In mid-July, the pond was crystalline, sun sparkling off its surface, but it took a lot of work to get it that way, Kuda explained.

“Last year we had problems with American lotus,” he said, describing the roots of the seemingly floating flower as “branching out like a strawberry plant.”

The native lotus can rapidly take over a pond. To manage the issue, Kuda began working with Missouri Department of Conservation Fisheries Management Biologist Scott Williams. Spreading through thick rhizomes that grow along the pond bottom, American lotus can grow in up to 12 feet of water, Williams said. Kuda had this unde­sirable plant in depths of at least 8 feet, and Williams recommended treating the pond with GlyphoMate 41 due to its efficacy and ease of use.

“It definitely got rid of the lotus last year,” Kuda said. “But this year the filamentous algae took over.”

Each year has different contributing factors when it comes to what aquatic life will manifest. Other common problems include chara, pondweeds, watermeal, water shield and cattails to name a few. According to Williams, Kuda’s experience is typical—especially in older ponds.

“There are nutrients in aquatic environments just like the soil,” Williams said. “As soil from the surrounding land contin­ues to slowly wash in over time, more nutrients accumulate.”

When one plant using those nutrients is eliminated, another plant, often filamentous algae, fills the void, he continued.

“Algae is an interesting plant in that it produces oxygen in the presence of sunlight [photosynthesis],” Williams said. “Fila­mentous algae, which grows in mats, is not as high of a risk, but planktonic algae, the kind that turns the water green, is a bit higher risk. The danger comes at night when photosynthesis stops and algae takes oxygen out of the water through respira­tion. That’s when we start seeing stressed fish and fish kills in the morning.”

Additionally, Williams added, if a pond gets a large bloom of algae, it may only take a couple of cloudy days for that algae to begin dying back and start to decay. The bacteria responsible for decay use oxygen, causing potential fish kills as well.

“This pond typically stays pretty clear,” Kuda said. “There are times when it’s so clear we can almost see to the bottom, but I think that helped things grow this spring. The sun could really get in and give the algae the light it needed. This pond is close to an acre, and at one point a third of it was covered.”

So Kuda called upon Williams again and worked with his local MFA affiliate in Lohman to find products to manage the ever-growing mass of filamentous algae. He and his son, Jake, spent hours in a boat raking the pond as the mass moved from one end of the pond to the other, depending on wind direction. They then treated the water with copper sulfate and a product called Crystal Blue. And they raked some more.

“I know some people who broadcast the crystals,” Kuda said. “I didn’t. I mixed it in a sprayer and applied it directly on the algae mats. Then I sprayed it around the perimeter of the pond, and we started to see a difference in a couple of days. I did that twice, and it’s pretty clear now.”

While some tiny pockets of algae still exist on the periphery of the pond, it’s important to remember that plants should be managed, not eradicated, Williams emphasized.

“Aquatic plants are a necessary component if you want to raise a healthy fish population, because those plants are the base of the food chain,” he said. “It’s food for aquatic inverte­brates like bugs, which is then food for your fish. Having some aquatic plants is not a terrible thing. Without them, it would be like raising cattle on bare ground. Keeping it in control is the key.” 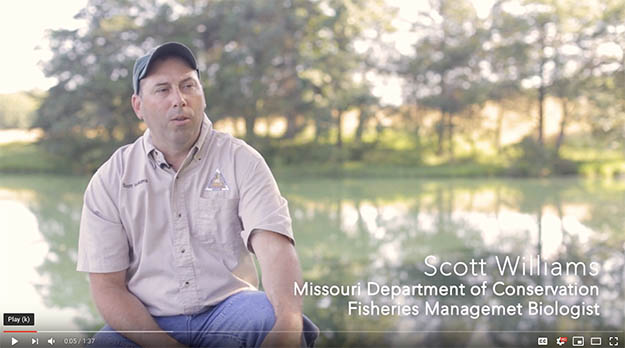 Planning for a pond?

Whether you’re planning a pond for cattle or recreation, there are things you can do up front to mitigate future issues.

If you’re building a pond from scratch, management may be easier in the long run depending on its purpose. Missouri Department of Conservation Fisheries Management Biologist Scott Williams shares these tips.

When using a pond for cattle, Williams recom­mends adding a spillway pipe and a frost-free hydrant for watering.

“Anyone I talk to who is thinking of building a pond, I suggest adding a hydrant below it and fencing the source because cattle break down a pond so fast,” Williams said. “They collapse the banks, soil washes in and nutrient levels become more intense, which contributes to some of these other issues.”

He also advises adding a drain into the plans for any new pond.

“A lot of people think, ‘Why would I possibly want to drain a pond?’ but 20 years down the road when aquatic plants are starting to become a problem, the ability to fluctuate a water level can go a long way,” Williams explained.

And if someone wants the best of both worlds, he has solutions for that, too.

“It really comes down to what someone is looking for with a pond—what they need and what they want,” Williams said. “If they’re not in­terested in fishing or recreation, that’s different, but if they’re wanting a multi-use recreational pond that can also provide livestock water, there are definitely ways to do that.”