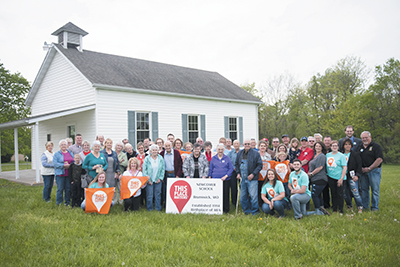 On May 3, 74 people attended a kick-off event organized by Missouri Main Street Connection to celebrate National Preservation Month at the Newcomer Schoolhouse near Brunswick, Mo.The tiny, one-room Newcomer Schoolhouse in Brunswick, Mo., came alive with activity on May 3 as 74 people filled the building and spilled out onto its porch to launch a tour of historic sites across the Show-Me State.

The event, organized by the Missouri Main Street Connection in honor of Na­tional Preservation Month, was one of the first stops on a road show titled “This Place Matters.” Throughout May, the 17-site tour highlighted historic districts and properties in rural communities that sponsored an event.

Why does this place matter? Newcomer Schoolhouse is considered the birth­place of MFA on March 10, 1914, when seven farmers gathered there to place a bulk order of binder twine. With the formation of the Newcomer Schoolhouse Farm Club and its first order of agricultural inputs, those visionary farmers helped fulfill the vision of MFA founder William Hirth, who had been advocating the idea of cooperative buying power through his magazine, The Missouri Farm­er—now Today’s Farmer.

That momentous meeting in the Chariton County schoolhouse marked the beginning of MFA and its 105-year history of serving Midwest farmers. That significance was celebrated by the Missouri Main Street Connection, a non-profit whose mission is to enhance the economic, social, cultural and environmental well-being of historic downtown business districts in the state. Kussman spear­headed efforts for the Brunswick Main Street Association to join the organization, and the city is now designated as an affiliate grant community.

“Our job is to promote our community, the heritage, our identity and our eco­nomic vitality,” Kussman said. “It’s all connected with who we are, and a big part of who we are has to do with MFA.” 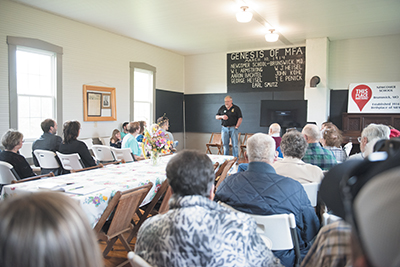 Retired MFA employee Jim Nanneman helped restore the school for MFA Incorporated’s centennial celebration in 2014. Considered the birthplace of MFA, the building is where seven farmers placed their first cooperative order in 1914.An occupational therapist by trade, Kussman moved back to Brunswick in 2017 from the West Coast after her father died, and she soon began to get involved in community activities.

“I truly didn’t know why I was called back here,” she said. “A job opened up for me in healthcare, and about three months later I started a clean-up day for the city. We call it the ‘Big Spring Clean,’ which is now in its third year. From there, I knew I wanted to contribute because I had chosen to come back.”

Bill Jackson, who co-owned and operated Agri Services of Brunswick from 1977 until his retirement last fall, serves as an adviser to the Brunswick Main Street Association board of di­rectors. He helped organize the Newcomer Schoolhouse event.

“I wasn’t acting busy enough, I guess,” Jackson joked. “That happens when you retire.”

The program at the Main Street event included a video produced by the sixth-grade class from Brunswick Elementary illustrating the history of the building, cooperatives and MFA. Jim Nanneman, who helped restore the building prior to MFA’s centennial in 2014, discussed those efforts and answered ques­tions about specific renovations such as the floors, paint and kitchen that once occupied the back corner.

Former students of Newcomer school were in attendance, swapping stories about the school and their teacher, Lucy Hei­sel. First through eighth grade were taught in that same room. Shirley Fry passed around her first-grade picture from 1947 and shared her memories of the school.

Margie Jansen (Feitz), who attended from 1938-1947, also remembers her time there well.

“I’d walk the mile to and from my house every day,” Jansen said. “Sometimes I’d ride a horse or a bicycle. Other times we’d run because the boys would throw rocks at us.” 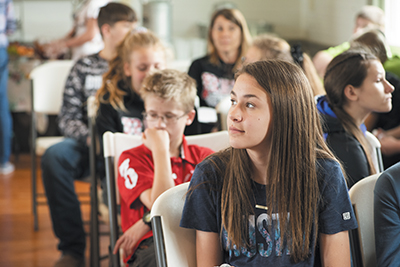 Cadence Meyer from Mrs. Richards’ sixth-grade class in Brunswick, Mo. listens to a presentation during the day’s events. The sixth-graders created a video explanation of MFA’s history to showcase at the event.The school dates to at least 1876. Attendees debated when the last class was held there, but it was likely in the late 1940s or early 1950s. The school was part of a cluster of buildings that once included a Christian church, a livery stable and a general store. The Newcomer Post Office was established in 1886 and operat­ed until 1906. Those sites have now given way to open pastures.

“Why does any place matter?” MFA Director of Communications Steve Fairchild asked when wrap­ping up the day’s events. “Of course, this place matters to MFA because it’s part of our history, but places matter because they are a placeholder. They are a representation of human progress—of what we’ve done and what our legacy is. That’s why places matter.”

Kussman said she and her fellow members of the Main Street Association have laid out a five- to 10-year plan to continue the revitalization of Brunswick’s downtown buildings, reassert the city’s presence on the Grand River and strengthen its identity as the pecan capital of Missouri.

“Big things are going to be happening in the next three to five years,” Kussman said. “Right now, we have a lot of ideas that are like seeds germinating. When they push up through the ground, they will be blooms of something great.”

To find out more about #Thisplacematters sites, visit www.momainstreet.org.