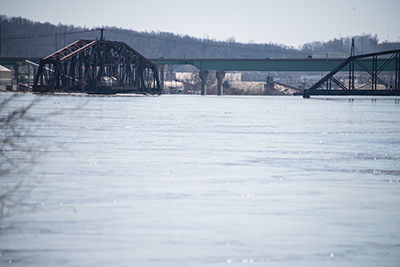 Missouri River in St. Joseph, Mo., as it was cresting March 21 at just over 30 feet, the second-highest level on record.For many farms along the Missouri and Mississippi rivers, flood­waters were still rising and hopes for spring planting were falling as this issue of Today’s Farmer went to press in mid-April.

At the time, damage estimates were still being calculated for Missouri, but in late March floodwaters covered roughly 200,000 acres in five northwest counties adjoining the Missouri River, according to USDA’s Natural Resourc­es Conservation Service. Kansas officials said flood damage was limited to about 31,000 acres of mostly farmland and some stored grain.

Neighboring Iowa and Nebraska were harder hit. Iowa Farm Bureau estimated the state may see more than $2 billion in damages from flooding, and Nebraska officials reported nearly $1.4 billion in flood damage. Totals are expected to grow as more assessments are made.

This early flooding was caused by rapid snow melt combined with heavy spring rain and late-season snowfall in areas where soil moisture was already high from record winter precipitation, according to the National Oceanic and Atmospheric Administration (NOAA). As a result, many farmers are faced with waterlogged fields, damaged grain, massive cleanup and impassable roads and bridges to fields and livestock. Sand and debris left behind must be cleaned up before planting.

“Flooding has impacted thousands of acres in our trade territory along the Missouri River in the AGChoice and Midwest groups,” said MFA Region 1 Manager Adam McIntyre, who covers northwest Missouri and adjacent coun­ties. “As the water starts to recede, producers will be faced with the decisions for the 2019 crop year. Many producers are planning on taking ‘prevent plant’ on corn instead of planting soybeans with the threat of additional flooding and no levee protection. Only time will tell.”

Indeed, the March floods could be just the beginning of a rough start to the growing season. Hefty snowpack in the northern Plains is adding to already swollen rivers and streams, and NOAA is predicting above-average rainfall this spring. The administration’s Spring Flood Outlook Map shows greater than 50 percent chance of major, moderate or minor flooding in MFA territory through May.

“The extensive flooding we’ve seen will become more dire as the water flows downstream,” said Ed Clark, director of NOAA’s National Water Center. “This is shaping up to be a potentially unprecedented flood season, with more than 200 million peo­ple at risk for flooding in their communities.” 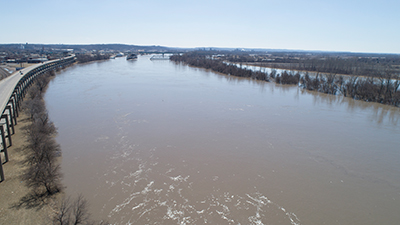 Missouri River in St. Joseph, Mo., as it was cresting March 21 at just over 30 feet, the second-highest level on record.According to the U.S. Army Corps of Engineers, which oversees river infrastructure, at least 62 Midwest levees were breached or overtopped in March, and hundreds of miles of levees sustained damage. The upper Missouri River Basin saw 11 million acre-feet of water in March alone, 51 percent above the previous record of 7.3 million acre-feet set in 1952.

Flooding also caused problems for transportation. Barge movement was stopped or restricted on affected waterways, rail companies had to divert trains where tracks were under water, and trucks had to find alternate routes in areas where roads were closed or damaged.

Dawson said it’s too soon to tell how the wet spring could otherwise affect grain volume in the fall.

“We know we will have some acres that won’t get planted, but at this point, the second week of April, we don’t have enough information to know what kind of overall impact we will see,” he said. “The later we go in the calendar, every­thing gets more compressed. But Mis­souri farmers can react quickly and get a lot done in a short amount of time.”

Missouri Gov. Mike Parson declared a state of emergency on March 21 in response to worsening conditions along the Missouri and Mississippi rivers. Two weeks later, he joined Iowa Gov. Kim Reynolds and Nebraska Gov. Pete Rick­etts in asking the Corps of Engineers for short-term help in fixing breached levees and for long-term solutions to control the Missouri River in the future. At a news conference, the three gov­ernors pledged to work together as a region to ensure their states have a more active role in managing the river. 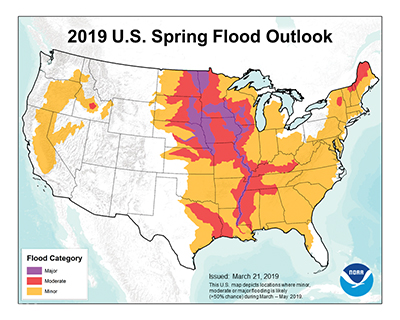 The National Oceanic and Atmospheric Administration’s Spring Flood Outlook Map shows greater than 50 percent chance of major, moderate or minor flooding in much of the Midwest through May.“It’s long past time for change,” Parson said. “We must begin a serious dis­cussion about how we improve flood control. One-third of Missouri’s most productive farmland’s fate rests in the hands of those who manage our rivers—the Corps. The devastating flooding we are experiencing and the previous record 2011 flooding have demonstrated the current system is insufficient to protect us.”

In early April, the governor requested assistance from the Federal Emergency Management Agency in making damage assessments for seven Missouri counties: Andrew, Atchison, Buchanan, Holt, Mississippi, New Madrid and Ray. Additional assessments are likely to be conducted in other areas.

“It’s already clear that the damage from the historic flooding has been devastating for some Missouri communities,” Parson said. “These assessments are an important next step as we con­tinue to focus efforts on rebuilding.”