Views from the countryside

Everybody has a story. That’s what Andrew McCrea has discovered during his travels as an agricultural leader, speaker, broadcaster and author. 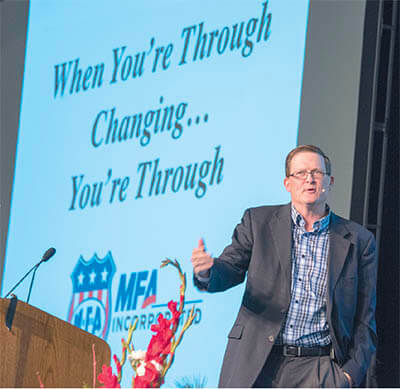 McCrea, who serves on his local Agri Services board, was keynote speaker at MFA Incorporated’s 2018 annual meeting Nov. 27. His speaking career began when he was a state and national FFA officer. Since 1996, McCrea has produced “American Countryside,” a nationally syndicated radio program broadcast daily on more than 100 stations plus satellite radio. Even after 22 years and 5,000-plus shows, there’s an endless supply of ideas, he said.

“When I first started the daily broadcasts, I thought, ‘How will we ever come up with enough stories?’” McCrea said. “Well, it’s been just the opposite. Everybody in every place has a story. There are more stories than I can ever tell.”

He may spend his time telling tales about others, but McCrea has quite an interesting story of his own. It’s one of leadership and entrepreneurship, natural-born talent and fierce family ties. The 46-year-old is not only an award-winning broadcaster, celebrated author and sought-after speaker but he’s also a fifth-generation farmer who balances his successful communications career with his cattle and row-crop farm near Maysville in northwest Missouri. The farm was established by McCrea’s great-great-grandfather in 1910.

When McCrea was growing up, his father, M.L., and grandfather, Maurice, ran a renowned purebred Angus business and showed cattle all over the country. Maurice was also longtime beef cattle superintendent of the Missouri State Fair.

“About the time I was born, they got out of the purebred business because of the time and travel involved and got totally into stocker cattle,” McCrea said. “Over time, we’ve slowly expanded both crops and livestock.”

McCrea figured farming would be his full-time career, too, but his involvement in FFA sent him on a life-changing journey. Terms as Missouri FFA president in 1991-92 and then national FFA secretary from 1993-94 required extensive travel, public appearances, leadership training and speaking opportunities—all skills that would serve McCrea well in his next chapter.

“I got involved in FFA because I wanted to farm,” McCrea said. “And it helped me do that. But what I couldn’t see at the time was that it would make me a better leader and give me opportunities to speak that I may never have had otherwise.” 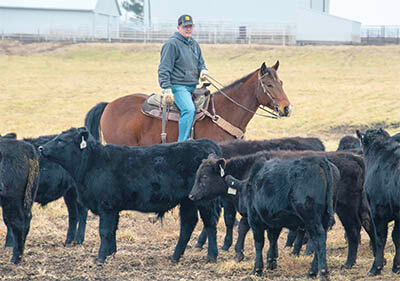 With about half the farm’s 4,500 acres in pasture, there’s a lot of ground to cover when checking or working cattle. That’s why the McCreas usually round them up by horseback. They continually bring in stocker cattle at 400-500 pounds and market them at around 900 pounds.His FFA experiences also sparked an interest in broadcasting, even though he was majoring in general agriculture at the University of Missouri.

“I studied animal science, agronomy and ag economics, and I was already halfway done with my degree when I finished my year as national officer,” McCrea said. “So, for the most part, all of my speaking and broadcast work has been on-the-job training.”

His first radio gig was an internship with the Brownfield Network in Jefferson City during his senior year at Mizzou. When he graduated in May 1996, Brownfield offered him a full-time job.

“I remember riding in the combine with Dad, and I told him I wasn’t going to take the job because I wanted to stay here on the farm,” McCrea said. “He suggested I ask if they could use me part time. When things are slower on the farm in the winter, that’s when Brownfield gets busier with all the farm shows and meetings, and I could be in Jeff City when they send out all their full-timers. I pitched that idea to them, and they agreed.”

McCrea started his run with Brownfield in the fall of 1996, working in the studio three or four days a week, mainly doing the daily market reports. But he had something bigger in mind—a concept that had been brewing since his days as a national FFA officer.

“I had the idea to do this American Countryside program because of all the people I met while out traveling to do speaking engagements,” McCrea said. “I told Brownfield I wanted to do my own show, interview these people and produce a feature for the radio. They said, ‘That’s fine. We’ll give you the free satellite time, but you have to do all the legwork of getting stations to sign up. It’ll just be your deal.’ So I started doing that one day a week, on Saturdays, in October 1996.”

Station No. 1 was KFEQ in St. Joseph. Story No. 1 featured the president of the New Jersey Sweet Potato Association.

“When the first American Countryside program was scheduled to run, I was in Oregon doing a conference for FFA,” McCrea recalled. “It ran at 6:30 in the morning, which was 4:30 Pacific time. I got up early and called home, and my mom put the telephone in front of the radio so I could listen to it. I laugh about that now, but it was such a big deal to me. And 22 years later, I still love doing it.” 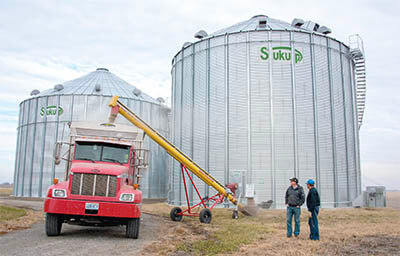 McCrea, left, checks with farm employee Doug Delaney, who is loading beans for transport to market. Much of the farm’s grain goes to MFA’s Hamilton Rail Facility.A few years into its run, the program’s popularity helped propel it to a daily schedule. When McCrea joined the staff of Farm Journal as a columnist in 2013, he brought the show with him. Being part of the multi-media conglomerate gave him new opportunities in both print and broadcast media. In addition to radio, McCrea now produces a television version of American Countryside that airs weekends on the

U.S. Farm Report and can be seen on RFD-TV. This past summer, he also launched a Farm Journal podcast, “Farming the Countryside,” which exclusively features agricultural topics.
During his broadcast career, McCrea has interviewed Emmy and Grammy winners, all-star athletes, Iditarod sled dog mushers and professional wrestlers. But he said his favorite stories are what American Countryside is all about: “ordinary people doing extraordinary things.”

“Some are historical, some are quirky, but it’s usually just people who love telling others about their lives and what they do,” McCrea said. “For example, I interviewed a gentleman who was aboard the Enola

Gay when they dropped the first atomic bomb. He was the one who worked on the ignition system and armed the weapon. That was an amazing interview.”

“I also remember visiting Grover’s Mill, N.J., which was made famous by Orson Welles’ War of the Worlds broadcast,” he continued. “I talked with a lady there who was at church when somebody came running in and told everyone the Martians were attacking. And just recently, I interviewed the curator of the vacuum cleaner museum in St. James, Mo. He was fascinating. That was one of the most fun interviews I’ve done all year.”

“Speaking gives me the opportunity to go get the interviews, and the interviews give me a lot of content for speaking. That’s how the two end up working together,” he said. “It’s rare that I make a trip just to speak somewhere or just to interview someone. That’s what made it work initially with Brownfield and now with Farm Journal. For the most part, they’re not having to pick up any travel expense.”

His interviews have also given McCrea material for several books, including “American Countryside,” “The Man Who Was President for a Day” and “God’s Perfect View.” His latest book, “Total Town Makeover,” came out in January and chronicles stories of small towns that have been revitalized by their citizens.

“In a sense, I’ve been working on that book for 20 years and never realized it until now,” McCrea said. “So many of the stories I’ve gathered were people in small towns doing neat things. There are so many people who see their towns vanishing, and hopefully this will help inspire people to do something to change that.”

No matter where he travels, however, McCrea is quick to say that home is his favorite place to be. In fact, he ends his on-stage presentations with a photo of the sign pointing the way to McCrea Farms, where he and his father keep up to 2,000 stocker cattle and raise row crops and pasture on 4,500 acres.

McCrea and his wife, Paula, are raising the sixth generation on the farm with their children, Luke, 11, and Alison, 10. The majority of McCrea’s broadcasts are produced from his “home” studio, which allows him to be more available for his family.

He’s also active in the agricultural industry and his local community, serving as past president of the Missouri Beef Industry Council and currently on the board of directors for MFA Agri Services in Maysville.

“MFA has been very important to our farm, and, as a farmer-owner, I wanted to help serve the co-op in return,” McCrea said. “A large percentage of what we use on our farm comes through MFA, and lot of grain goes back out to MFA, too. We’re on Crop-Trak and Nutri-Track programs, and it would be hard for us to do those things on our own. That’s why it’s important to have a cooperative to help you do that.”

Whether he’s harvesting crops or speaking to a crowd, telling stories on stage or working cattle on horseback, McCrea said he loves his multi-faceted career. He said he plans to keep doing what he’s doing, and “hopefully, do it all a little bit better while still trying to balance that with family.”

“If I went on the road and tried to speak full time, it just wouldn’t work, especially with young kids,” he said. “But even though I love the farm, if that’s what I did full time and never went and spoke, I think I’d feel like a piece of me was missing. I really like the combination, and I don’t think I would enjoy life nearly as much if I did all of one or the other.”

Learn more about Andrew McCrea and his American Countryside broadcasts at americancountryside.com.

You can also find his “Farming the Countryside” podcast at agweb.com.

CLICK TO VIEW this story in flipbook form as originally printed.