With so many outside forces at work—from economics and trade to regulations and technology—the meeting’s theme, “Empower Change,” was even more meaningful, said CEO Ernie Verslues. His president’s address outlined some of the ways MFA took charge of change in 2018 for the betterment of the cooperative and its farmer-owners. 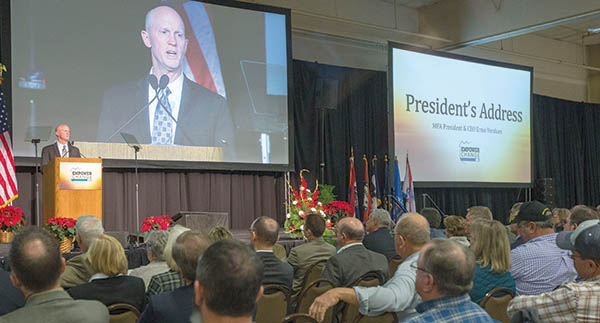 MFA Incorporated President and CEO Ernie Verslues delivers his president’s address in which he outlined ongoing changes to MFA’s retail and sales structure.“The current pace of change is mind-boggling, but it also provides unlimited potential,” Verslues said. “MFA implements change because we want to deliver the best products and services possible. In most cases, we succeed. But no matter the outcome, we try, we learn and we keep moving forward until we’ve met the challenge.”

More than 600 delegates, employees and special guests attended the meeting, which featured exhibits by MFA’s operating divisions and MFA Oil.

Even with weather and political issues affecting yield and prices, MFA managed to stay profitable, said Board Chairman Wayne Nichols. He specifically mentioned MFA’s efforts in helping farmers through the summer drought.

“MFA and its employees took up the unique demands of drought by seeking solutions for its members,” he said. “From county-by-county information on drought relief to finding products and services that could help mitigate short feed situations and row-crop challenges, I believe MFA was a valuable resource.”

Verslues listed other operational highlights of 2018, including cutting-edge livestock feeds, MFA’s PowerCalf app, a successful first full year at the Hamilton Rail Facility, MFA’s proprietary MorCorn and MorSoy brands of seed and industry-leading precision programs. He also reported that MFA is nearing completion of its MerchantAg software implementation at all company-owned stores, an upgrade that will provide better data access and management.

“We never sit still,” Verslues said. “We are always looking to improve. We embrace the challenges and opportunities we are facing in agriculture, and we know it will require continued change.”
The biggest change for MFA in recent months is the reorganization of the cooperative’s sales structure, resulting from the recommendations of a committee assembled from a cross-section of the company.

“With these changes, livestock and agronomy sales are now a full-time focus,” Verslues said. “Customer interaction can’t be a part-time job. As a company, we are better focused on building relationships and better prepared to serve your needs.”

What won’t change, he added, is MFA’s attention to people, finances, products, services and facilities.

Farm Supply Product Manager Ryan Mauzey, left, talks with Tom Silvey of Hamilton about the features of the Brush Buster pasture sprayer.“We have a staff that does an incredible job of servicing our customers’ needs. We must provide them the tools to do their job,” he said. “Despite the tough ag economy, we continue to have a strong balance sheet. We can’t lose sight of continued financial strength. And we must continue to develop solutions to your challenges, provide value to your operations and be good stewards of the land, air and water.”
2018 by the numbers

Northwest Missouri Grain, also known as the MFA Rail Facility, reached $58 million this year. This joint venture with MFA Oil Co. opened in the summer of 2017.

Other joint ventures include AGRIServices of Brunswick, Cache River Valley Seed, Mid-State Seed and Alliance Animal Care. MFA holds a 50-percent ownership in these companies. The cooperative also has 45-percent stake in Central Missouri AGRIService. Together, the joint ventures delivered $462 million in sales this year.

Pre-tax profits were $8.3 million, and MFA will return $5.1 million to member-owners in cash patronage and equity retirements.

While it was a “respectable profit year,” Raetz said, those figures aren’t ultimately where MFA needs to be. He attributed both the summer drought and harvest rains for the less-than-expected financial performance.

“Needless to say,” he said, “the weather had an impact on final numbers and will reduce our grain handled in 2019.”

Reviewing financial performance by category, Raetz reported that grain sales were $519 million, an increase of $37 million, with 84 million bushels handled throughout the system. Anticipating lower yields from this past season, he said the 2019 plan forecasts just over 70 million bushels.

“The lion’s share of this increase is in our Feed Division,” Raetz said. “Feed tons totaled 351,000, an increase of 17,000 tons. There is no question our Feed Division is the market leader in our trade territory, and we have high-quality products that set us apart from our competition. These products continue to add value to our livestock producers.”

Total margins and operating revenues were $223 million, an increase of $4 million from fiscal 2017. Joint venture earnings were $2.3 million compared to $3 million last year. Working capital was $83 million at year end.

Total assets at the end of August were up slightly to $496 million, due mainly to an increase in supply inventory. Again, Raetz pointed out, this was a byproduct of lower sales volume during the summer.

Raetz reported that MFA Incorporated has long-term debt of $84 million, including a term loan with CoBank, which financed the rail project, and the MFA Bond Program, which is unsecured debt.
Total net worth increased to $165 million, divided into non-cooperative earnings at $112 million and member equities of $53 million.

“Thanks to your support and continued patronage, MFA has built a strong balance sheet, and we continue to be a very strong company,” Raetz said. “It was a challenging year, and I believe the sales and volume numbers show your management team did a good job of maintaining and growing our market share. As a team, we are optimistic going into fiscal year 2019 and beyond.”

Change for rural Missouri
Addressing the challenges of 2018 has also been a focus for the Missouri Department of Agriculture. Speaking at the annual meeting, Missouri Director of Agriculture Chris Chinn gave an update on the department’s “MORE” campaign, which she said addressed food insecurity, rural access to high-speed internet, government regulation and workforce development over the past year.

“Agriculture is the strongest economic driver in rural Missouri, and from the beginning, MFA has been a central part of that economic hub,” Chinn said. “The tradition of putting farmers first and keeping rural Missouri strong is a shared goal of not only MFA but also your department of agriculture. Revitalizing rural communities is a passion of mine, and that’s what we built our MORE strategic initiative around.”

The meeting’s featured speaker was farm broadcaster, author and farmer Andrew McCrea, host of a national radio program, “American Countryside.” He also raises crops and cattle in Maysville, Mo., where he serves on his local MFA board. (See related story,)

A gifted storyteller, McCrea shared his experiences both on the farm and on the air, describing interesting places and people he’s met along the way. His overall message focused on the meeting theme, “Empower Change,” emphasizing that there’s a huge difference between change that is done to us and change we are empowered to make ourselves.

“Changes beyond our control are often a source of stress and worry,” McCrea said. “Changes we initiate ourselves, on the other hand, can be exhilarating and motivating.”
Reflecting on the many interviews he’d conducted through the years, McCrea said those who prosper in times of change have three traits that set them apart: They are personal and purposeful, and they have perspective.

“When you have purpose, you have a direction,” he said. “Being personal is all about how you deal with others. It takes a balance of both. Successful change also requires perspective. It’s not all about you. It’s about the people around you, too.”

And people, Chairman Nichols said, will continue to drive successful change for MFA.

“To empower change is to take ownership of it,” he said. “There is exciting work going on in both livestock and row crops at MFA. I want to thank MFA employees—from the home office, to the behind-the-scenes drivers, plant managers, and salespeople, to every location. As customers, we all know how vital employees are as the face of MFA.”