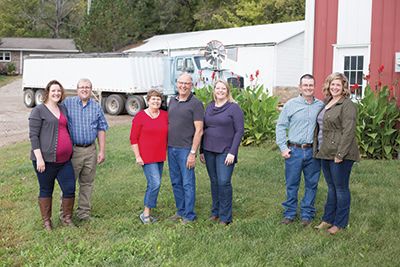 This article covers the pros and cons of various types of farm organizational structures. We provide a few general definitions and guidelines below, but we are not offering tax or legal advice. You should consult tax, legal and other experts before modifying your structure. Keep in mind that corporate law varies by state. It’s also important to note that no matter what their organizational structure, families continue to own the vast majority of U.S. farms.

Jeff Casten raised corn, soybeans, wheat, sorghum and four daughters on the family’s Quenemo, Kan., farm. He planned to farm his entire life but never thought the girls would continue the operation when he retired.

When his wife of 40 years, Joyce, died unexpectedly in 2012, plans changed.

“When my mom passed, everything turned on its head,” said Jill Casten, Jeff and Joyce’s daughter. “That tragedy changed all our lives from a personal standpoint. Dad went through the whole process of creating and establishing a trust so that if something happened to him, he would know things were taken care of from the farm perspective.”

Since then, her father has remarried, retired and reprioritized his life, Jill said. The 2017 crop will be the last one he harvests, but it won’t be the last one on the family’s farm. In the future, the farm will be operated by Jeff’s children and in-laws—Jill; Janae and her husband, Caleb McNally; and Jarah and her husband, Mike Hauger. Together, they have formed a limited liability company to keep the 1,000-acre operation in the family for a sixth generation. Their other sister, Jennifer, and her husband, Pete Roy, own a veterinary practice and decided not to join the LLC.

“I think dad realized life is short, and he wants to enjoy his new marriage in a way that doesn’t involve full-time farming,” Jill said. “He called a family meeting and told us he was going to step down. We began having conversations about what we could do, talked to an attorney about our options and consulted with people who specialize in farm transitions until we felt comfortable moving forward with forming an LLC.”

The Castens are among many other farming families who are changing or formalizing their business structure to protect their assets and operations as they grow or transition to new owners. There are several ways to go about it, but an LLC is one of the most popular options, according to Michael Sykuta, associate professor of agricultural and applied economics at the University of Missouri.

“Until about 40 years ago, the only alternatives to sole proprietorships or partnerships were C or S corporations,” Sykuta said. “In 1977, the state of Wyoming introduced a new organizational structure that offered the benefits of corporate limited liability and the income pass-through of an S corporation without all the strings of an S corporation involved. After a slow start, by 1996, LLCs became an option throughout the U.S. and quickly grew in popularity. A lot of farmers are creating LLCs. It’s easy to do.”

Another factor prompted interest in LLCs, he said.

“Farm-related liabilities have grown,” Sykuta said. “For example, environmental laws related to things like a leaking manure lagoon weren’t as stringent 20 years ago.”

According to USDA’s 2012 Census of Agriculture, 83 percent of all U.S. farms remain sole proprietorships and another 6 percent are partnerships. But Mary Sobba, an agriculture business specialist with the University of Missouri extension, said the trend is toward more complex farm structures.

“If you look at the data from the 2002 Census of Agriculture and the 2012 Census, you see the number and percentage of sole proprietors has declined,” she said.

Roger McEowen, Kansas Farm Bureau professor of agricultural law and taxation at Washburn University School of Law in Topeka, Kan., literally wrote the book on the pros and cons of various structures in his Principles of Agricultural Law.

“Many small farms remain sole proprietorships, but many larger farms are changing their structure for various reasons,” McEowen said. “For example, a different structure could help maximize government program payments.”

For farmers who want to create a new enterprise to add value to a product, Sobba sees advantages to changing structure.

“A formal business structure can cover liability related to contracts, food safety and people on the property,” she said.

Here are basic descriptions of the various types of structures available.

This is the simplest structure. You are the owner and the operator, and you retain all profits. The downside: “You are personally liable for any debts and legal actions,” Sykuta said. For example, if a farmhand sustains an injury while driving your tractor on the job, the employee can sue you, placing your personal assets at risk—including your home, vehicles and investments.

Two or more people—often family members or neighboring farmers—own this type of operation. Partnerships are easy to set up and can come with benefits.

“If you join in a partnership with your brother, for example, you can build more collateral to buy land,” Sykuta said. He recommends written agreements to assure fairness when it comes to splitting income and work responsibilities. When partnerships involve a large number of people, you probably want to name a managing partner, he added.

On the downside, Sykuta says, general partnerships offer even less liability protection than a sole proprietorship. Again, there’s no legal separation between the partners and the business.

“In addition, your share of the business’s assets may be used to satisfy a partner’s personal debts,” he said.

According to Sykuta, the LLC structure builds a firewall between your business assets and personal assets such as your home, vehicles and investments.

LLC governance differs from a partnership agreement primarily in that it limits the investor/partner’s liability to the amount of their investment. As Sykuta explained, LLC owners are shareholders. The owners can construct whatever type of operating agreement they think best suits their investment interests and the needs of the business operation, much like a general partnership.

LLCs can also bring tax benefits. Your income may pass through the company, which means your income as the business owner is taxed just once, at the individual level, similar to a partnership or an S corporation, Sykuta said.

The LLC structure suited the Castens because the siblings and husbands plan to keep working in their full-time jobs as they run the farm together. Jeff retains ownership of the farm, leasing his land and equipment to his daughters and sons-in-law.

“Our dad has set it up in a trust so that when he passes, it gets split among us four sisters. He’s been very transparent about it,” Jill explained. “Years and years and years from now, we know the four of us will be owners of the land and assets, and we will keep on farming it in the meantime.”

Our experts agree that, like LLCs, S corporations allow you to choose a tax structure that passes income through the corporation—shareowners are taxed only for their portion of corporate earnings at their personal income level. This structure may benefit owner-managers, Sykuta said.

“Employee taxes and benefits are taken out of your salary by the company,” he said. “Taking less in salary so that your profit income is higher allows you to move some of your earnings to non-self-employment-tax income. However, you have to be paid a reasonable salary for services rendered—you can’t just pay yourself a dollar a year to avoid taxes.”

According to Sykuta and McEowen, S corporations come with rules on who can be shareholders. The company must be based in the U.S. and shareholders must be U.S. citizens, although certain types of trusts and estates can own shares. An S corporation can have no more than 100 shareholders. In addition, S corporations restrict stock types. They may only issue one class of stock, but differences in voting rights are allowed.

“This can create problems for farm families as farms are passed from one generation to the next and more recent generations grow more separated from the farm,” Sykuta said. “Restrictions on voting shares may address some of these concerns, but such restrictions reduce the value of those shares relative to voting shares. Being able to have different classes of shares might allow for other ways of balancing the interests of actively engaged and non-actively engaged family members.”

Since S corporations must pay out dividends regularly, “it can be more difficult to build cash and equity needed to borrow funds,” Sykuta added.

“Accounting can be more difficult, reasonable compensation for owners is a huge IRS audit issue, and there’s not as much flexibility in allocating income and loss among shareholders,” he said. “Stock ownership restrictions come into play, particularly if the associated estate plan involves a trust.”

In this case, Sykuta says, you are taxed twice—on your business level and on your corporate dividends as a shareholder.

On the plus side, you can create different classes of shareholders. “Extended families may choose a C corporation as it allows for different levels of voting rights,” Sykuta says.

No matter what type of structure you choose, consult with tax, legal and other experts—including your banker—before making a decision.

“It’s important to talk with lawyers and tax experts, but they don’t always appreciate the economic impact of governance and decision-making,” said Sykuta, who works with agricultural organizations on structure issues and researches how different types affect company behavior.

Settling on the right structure can be complex, and it can take time. Sykuta has been working with one family for four years as they work through transitioning the farm to the next generation.

The Castens know firsthand just how much paperwork and decision-making is involved in changing business structure, but they encourage other farmers to put a defined plan in place so they can avoid family drama when it comes to the operation’s succession.

“I realize how fortunate we are because we are all close as a family but also pragmatic in our approach,” Jill said. “We all want to see the success of our family farm. It’s not going to be perfect, but we have all the business aspects in place to protect ourselves. We’re optimistically looking forward to building Casten Farms in the future and maybe having our nephews and nieces be part of it someday, if they want to.”

For more information, McEowen’s chart, The Relative Advantages and Disadvantages of Various Business Forms, can be found here.