All aboard the grain train 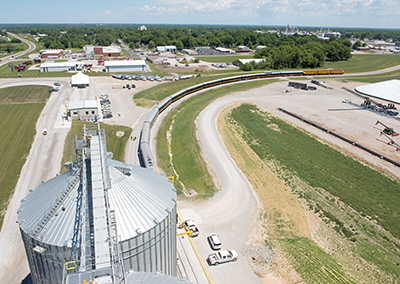 The numbers are impressive. Four 100-car shuttle trains loaded with grain each month. Loading and unloading capacity of 60,000 bushels per hour. More than 1.1 million bushels of upright storage and 6 million bushels of temporary storage. Fewer than 7 minutes of average wait time for a grain truck driver.

But farmers—not figures—are the true measure of success for Central Missouri AGRIService’s new shuttle-loader in Saline County, Mo., just north of Marshall. This fall is the second full harvest season that the high-capacity grain elevator has been in operation, and John Fletcher, CMAS general manager, said the response from customers has been nothing but positive.

“I had a guy call me last fall just to say how much he appreciated us,” Fletcher said. “He said we saved him $1,000 per day for a truck and driver he didn’t have to hire because his other trucks were getting to and from the fields fast enough. Another farmer told me his driver got back to the fields so fast he thought something was wrong. You hear anecdotal stuff like that, and it sure does make you feel good.”

Local farmer Wayne Brown, who grows corn, soybeans and wheat with his son, Cary, has a similar story to share. The row-crop producers have been CMAS customers for years and said the Marshall elevator has made a huge impact on their operation.

“Before this opened, we were using seven trucks and seven drivers, and last year we did almost all our harvest with two trucks and two drivers,” said Brown, whose construction company also did site work for the facility. “That’s a big deal. It’s not only great for me but all the farmers of Saline and surrounding counties.” 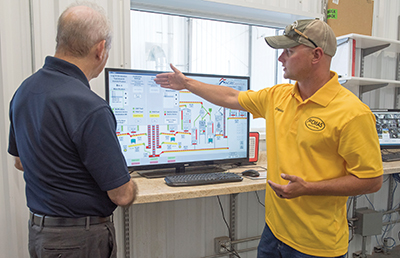 A grand opening celebration and official ribbon-cutting were held June 5 at the facility, located near CMAS’ main location in Marshall. Farmers, community leaders and special guests were treated to lunch and tours of the shuttle-loader, which is positioned on the Kansas City Southern Railway and easily accessible from U.S. Highway 65 and Missouri Highway 20, 41 and 240.

Construction began on the 130-acre greenfield property in December 2014, and it opened on a limited basis to receive grain in September 2015. A year later, construction on the railroad’s loop track began and was completed in January 2017. The side track off the main KCS line accommodates 100-car shuttle trains capable of holding some 350,000 bushels each. This type of facility is preferred by railroads because it offers ease of movement from grain’s origin to its market, said Dan Schueth, manager of railway network planning for KCS.

“For us, the loop track is the way to go,” he said. “We bring the train in, it’s loaded in 12 hours or less, and we take it out. This type of facility offers us speed, convenience, versatility and efficiency, all around. It helps our cars continue to move and keeps them turning quicker.”

CMAS, a joint venture formed in 1999 by members MFA Incorporated, Fletcher Grain Company and Cooperative Association #1 of Slater, Mo., has other grain-handling facilities at its locations in Marshall, Malta Bend, Miami, Slater and Waverly. However, before the new elevator opened, only Marshall and Slater had the ability to ship by rail, Fletcher said, and even then it was only in 25-car increments.

“The most we’d ever unloaded in Marshall on a given day prior to having this facility was about 160,000 bushels,” Fletcher said. “We had days last fall where we unloaded more than 350,000 bushels.”

The need for a larger, faster facility with shuttle-loading capabilities was driven by supply and demand, he said. Bigger crops and better yields mean more grain to be sold. In 2016, Saline County was No. 1 in corn production for Missouri with 26.6 million bushels harvested and the third largest in soybeans with 7.9 million bushels.

“Simply put, we couldn’t ship enough grain,” Fletcher said. “What we took in at harvest filled us up, and we couldn’t ship it fast enough to be competitive for additional grain during the year. We needed shipping capacity that kept up with our origination capacity.”

Not only does the new facility benefit farmers by giving them a quick and convenient place to haul their grain, it also opens up new markets and better pricing opportunities for CMAS and its customers, Fletcher said.

“We can take advantage of carrying charge markets and market inversions when they’re available, and that gives us a better control over the price we get and where we sell,” he explained. “A lot of the bigger grain receivers are doing business in unit trains, so basically we can play with anybody now. We don’t just have to look for the small receivers.”

One such customer is the Ragasa soybean- crushing plant in Monterrey, Mexico. Supply Manager Francisco Belden attended the CMAS grand opening ceremony for a firsthand look at the operation where he intends to source soybeans for Ragasa’s food-grade oil production. In fact, the first loads of soybeans from the Marshall facility were shipped to the Mexico plant this summer. When an ongoing expansion is completed, Ragasa will handle 2,000 railcars each month, Belden said. 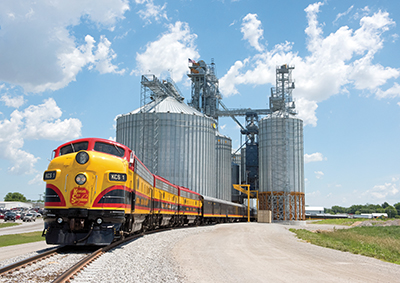 “We have new capacity coming on board and need more beans,” he said. “We like the beans grown here in Missouri, but I haven’t bought [from CMAS] before because they needed a larger elevator to give us a competitive price. This facility is in a very special logistical position to give service to Mexico.”

In addition to soybeans, corn is also being shipped to markets in Mexico and feed mills in Oklahoma and Texas, Fletcher said. Some 30 trains have been loaded and shipped since January, and he said the ultimate goal is 40 to 45 shuttle trains annually.

“If we do that,” Fletcher said, “we’ll accomplish what we set out to accomplish.”

RELATED ARTICLE: BELLE OF THE BALL