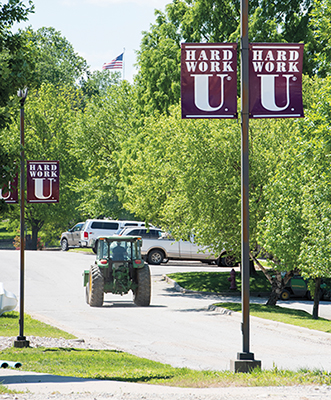 Dining at The Keeter Center, an elegantly rustic lodge on the College of the Ozarks campus near Branson, Mo., is an unexpectedly exquisite experience.

Each course offers dishes made with student-produced ingredients from the campus farm, consistently ranked as one of the best college farms in the nation by online services such as College Ranker and Best College Reviews. For starters, there are fried green tomatoes breaded in fresh-ground cornmeal, followed by mixed greens salads, several pork entrées and homemade ice cream for dessert. Even the table’s decorative centerpiece is crafted from flowers and ornamental plants grown in the college’s horticultural greenhouses.

“It’s amazing how much demand there is for a place like this,” said Dr. John Anderson, farm manager and chair of the college’s Business, Applied and Technical Sciences Division. “There’s nothing like it with this atmosphere, this quality. We’d outgrown the kitchen to the point that we closed down in January and completely remodeled and expanded it. It gives us more space for operations and learning. This restaurant, just like every part of our campus, is part of the classroom environment.”

Nearly everything raised on the College of the Ozarks farm is used in some way by The Keeter Center, a combination hotel-restaurant-conference center on the historic campus where students do not pay tuition thanks to an integrated work program. Along with agriculture, there are more than two dozen other majors at this fully accredited liberal arts college, and all 1,500 students earn their education in exchange for working at assigned jobs on campus. Students work 15 hours each week, plus one 40-hour week per semester, to cover tuition, and they can work extra time in the summer to pay for room and board. The faith-based college openly discourages debt and doesn’t participate in any government or private loan programs.

This novel concept, plus proximity to the area’s bustling tourism industry, has made College of the Ozarks somewhat of a tourist attraction all its own—and agriculture is the star of the show. Visitors flock to campus to buy student-produced goods at the farmers market, Edwards Mill gift shop, creamery, greenhouses and famed Fruitcake and Jelly Kitchen. Even the dairy barn is designed with a rare six-stall bypass milking parlor so observers can stand outside and watch the process through large picture windows.

“It literally warms people’s hearts to see students working in the landscape or with the cows,” said Lori Simmons, garden and farmers market supervisor. “It’s refreshing. We also have so many places on campus where you can purchase things the students have produced. Tourism is part of who we’ve become.”

Though there are more than 100 work stations on campus, farm jobs are among the most popular choices for students in all disciplines, not just agriculture. On the livestock side, opportunities are available in the beef, hog and dairy farms as well as feed mill and meat-processing plant. The agronomy work station encompasses all aspects of crop production, and students can also work in the horticulture lab, gardens and farmers market, which is temporarily closed due to construction.

“The hands-on application you get within a work station is where the true value lies,” said Shaylee Wallace, a junior animal science major whose job assignments have included The Keeter Center, dairy farm, garden and farmers market. “You can talk about something in the classroom all you want, but once you do it for yourself, it’s instilled in you. That’s when I really learn the skills I need to be successful in the workforce, especially in agriculture, because those jobs are competitive and skill-based.”

That’s exactly what MFA Incorporated employee Noble Carpenter discovered when he graduated from the College of the Ozarks in 2013 with a degree in agribusiness and animal science. While on campus, he worked in the carpentry shop and on the hog farm, which has proven beneficial to his current role as livestock consultant in eastern and central Missouri.

“There are a lot of hogs in my area, so that helped me tremendously,” Carpenter said. “There are a lot of things you learn on the job that college can’t prepare you for, but the base of my knowledge came from school. The hands-on experience to go with quality education in the classroom did a really good job of preparing me for what I do now.”

Carpenter said he chose College of the Ozarks over a state university partly because of its conservative values and close-knit environment. Those attributes also attracted recent graduate Milam Smith, who completed his agribusiness/animal science degree this past May. He plans to return to his native Mississippi and start his own beef operation.

“I’d heard lots of good things about the school before I came, and it surpassed what I had heard,” Smith said. “I was raised to be part of something like this, with a strong Christian background, core values and work ethic. And it’s definitely a strong community, so that’s something I feel like I wouldn’t have gotten at a larger school.”

The oldest of seven, the promise of no college tuition costs ultimately swayed Smith’s decision to pursue his degree at College of the Ozarks.

“It’s definitely a great opportunity to graduate without debt,” he said. “I can use those finances to start my farm, and I wouldn’t have that if I’d chosen to go to another university.”

The school’s tradition of working for an education is as old as the college itself. The institution was founded in 1906 as a grammar school for children in this rugged, rural region, where there was little opportunity for formal education. Families in the area couldn’t afford to pay for schooling, so they worked to support it. From those humble beginnings, the school eventually grew into a two-year junior college and then a four-year college by 1965.

In 1973, the Wall Street Journal dubbed College of the Ozarks “Hard Work U.” in a front-page story about its work-study program. The nickname stuck and is now a trademarked logo for the university. Anderson said it’s just as relevant today.

“The students really do work hard here,” he said. “They get a lot out of it, but they put a lot in.”

As the college has grown, the emphasis on producing, growing and raising food has become even more central to its mission. The college’s acre-and-a-half garden includes seasonal selections of fruits and vegetables, including several types of greens, onions, broccoli, cabbage, green beans, cucumbers, tomatoes, peppers, carrots, potatoes, strawberries and watermelons.

“Our student-farmers are literally growing the produce, picking it, washing it and walking it up to The Keeter Center,” Simmons said. “How many farm-to-table restaurants have the farmers stepping into their back door? What’s even more awesome is that they’re paying for college by doing that work.”

At the dairy, some 60 cows are milked daily by students at 5 a.m. and 5 p.m. This work station is a full-circle experience, from the birth of calves all the way to bottling milk, which is sold on campus and the farmers market as well as used in the restaurant, cafeteria and creamery. The milking herd is primarily Holsteins with a few Jerseys and red Holsteins.

The college also operates off-site hog and beef farms. The farrow-to-finish swine operation consists of around 200 head, including registered Hampshire and commercial hybrid hogs. The majority of the pork is processed at the college’s own USDA-inspected facility to be used on campus and marketed to the public through the farmers market.

The beef herd is dispersed across several locations near campus with about 200 head of registered and commercial polled Hereford and Angus cattle. The operation primarily produces seed-stock rather than meat, and students have an opportunity to help organize the college’s biennial cattle auction held on odd years in the fall. The 2017 event will be Thanksgiving weekend, Nov. 25, at the on-campus sale barn.

“We don’t finish enough beef to supply our restaurant, although we’ll occasionally have a beef dish at a special event,” Anderson explained. “Most of the cattle go into our production sale. The students handle all aspects of it, even learning to be auctioneers.”

The livestock work stations give experience in all aspects of animal agriculture, including feeding, haying, vaccinations, breeding, record-keeping, farm maintenance and processing. All the rations are custom-mixed by student workers at the college’s feed mill with grain and concentrates sourced from area suppliers, including MFA Agri Services locations.

Along with giving students practical skills and classroom instruction, the college is committed to cultivating character, responsibility, patriotism and teamwork, said Tammy Holder, a 1990 graduate who is now associate professor of agriculture, beef farm manager and agronomy supervisor. These life lessons are just as important to their education, she said, and help build camaraderie among the students and staff.

“We become like family; we really do,” Holder said. “You teach with them. You work with them. You really get close. The students don’t just get the theory and background. When they leave here, they are more well-rounded people. We try to educate the whole person, not just the academic side.”

Although widely noted for its academic excellence and affordability, the college never rests on its laurels, Anderson said. In particular, he pointed out that the agriculture degree programs and curriculum are being revamped. New classes are being introduced, such as precision agriculture, weed science and animal genetics.

“This is great place to get an ag degree,” Anderson said. “If you draw a triangle connecting northwest Arkansas, St. Louis and Kansas City, there’s not an area of denser agribusiness activity in the nation. Our graduates are sought out there in the marketplace. We are continually trying to improve our farm operations to keep them relevant and viable and, more importantly, make sure our students are being equipped for success when they leave here.”

For more information, visit www.cofo.edu or call 417-334-6411. Most campus points of interest are open to the public Monday through Saturday, but check the website or call ahead for specific hours.