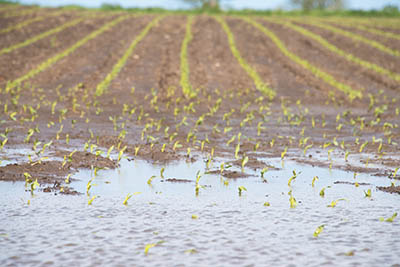 A slow-moving storm system brought more than 9 inches of rain to parts of the Midwest the weekend of April 29-30, sending rivers out of their banks, flooding communities, closing roads and submerging crop fields, many planted with young corn and soybeans and developing wheat.

Some rivers measured crests that topped previous records standing for over 100 years, and at one point, Missouri had more than 300 roads closed across the state, including two major interstates.

As waters receded, farmers, government officials and MFA agronomists began evaluating the impact on agriculture in these flood-impacted areas. In Missouri, damage was still being estimated at press time, but in neighboring Arkansas, preliminary reports estimated soybean losses at 83,200 acres, corn at 47,900 acres and cotton at 9,300 acres. Rice was hardest-hit with 156,000 planted acres potentially lost.

As the growing season progresses, MFA Incorporated’s agronomy team says nitrogen loss in corn fields is among top concerns for crops that survived the excessive saturation and flooding. Denitrification, a biological process that converts nitrate to gaseous forms of nitrogen that are lost to the atmosphere, can occur in soils that become waterlogged.

“Be honest about how long your soil was under water,” MFA Director of Agronomy Jason Weirich said. “If it was saturated for three days or more—and there aren’t many fields around here that weren’t—you could’ve lost up to half your nitrogen to denitrification, especially if you didn’t use a nitrogen stabilizer.”

Nitrogen losses can be corrected with a topdress or sidedress application all the way until tasseling, MFA Senior Agronomist Jason Worthington said, but the earlier the better.

“It may not be real apparent until the V8 growth stage. That’s when corn starts to take in a lot more nitrogen and when it’s going to show up hungry,” Worthington said. “Small corn won’t show those symptoms of hunger.”

While potassium and phosphorus are stable unless the field was severely eroded by floodwaters, sulfur is also subject to loss in saturated fields. Worthington encourages growers to add sulfur with nitrogen applications to correct potential deficiencies.

“Sulfur is a very mobile nutrient as well,” he explained. “It’s not always lost in the same way as nitrogen, but it is still vulnerable in the presence of excess moisture.”

On fields that were flooded, evaluating the weed control program is also important, Weirich pointed out.

“If you had a prolonged period of water on the field, herbicide effectiveness and residual control may be compromised,” he said.

Weirich and Worthington advise growers to make honest appraisals of their crops as soon as possible. If there are concerns, call on your MFA experts for advice on what products and practices can put the fields back on track for a productive season.

“If you haven’t already decided to do something to address potential losses, get someone who knows what they’re looking for in the field,” Worthington said. “A good trained scout can pick up symptoms of nitrogen deficiency, and we have tools that can give us insight even when the plant isn’t showing visible symptoms. It’s a lot more expensive not to add nitrogen than the actual cost of applying it in a year like this.”

Related Article: Dilution is the solution