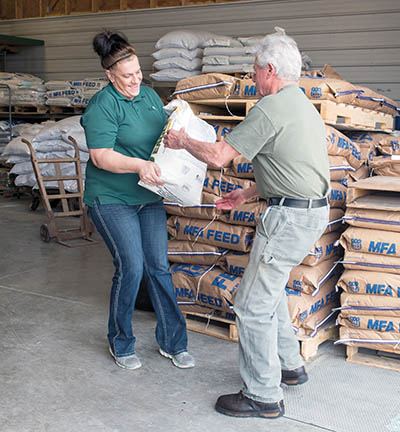 It’s the 18th of the month, and Kelley McNamar is sticking close to the store at MFA Agri Services in Shelbina, Mo.

Accounts are due today, and many customers come in to pay them in person. As location manager, McNamar makes a concerted effort to thank those patrons face to face.

“My schedule doesn’t always allow it, but I love to be here that day,” McNamar said. “They give us their business, and it’s the least I can do to be here to let them know we appreciate it.”

Customer care is a hallmark throughout the Shelbina operation, which encompasses a retail store, granary and fertilizer plant in Shelby County. The location is part of a network of six MFA Agri Services centers in northeast Missouri, joining facilities in Kirksville, Lancaster, LaPlata, Macon and New Cambria.

The personal touch of McNamar and her staff of 10 extends to the farm. They regularly conduct on-site visits to make recommendations on crop and livestock management and otherwise go above and beyond to serve their customers. It’s just “part of the job,” said McNamar, a 14-year veteran of the MFA system who came on board as Shelbina’s manager in December 2013.

“It’s important to have a personal relationship with our customers. After all, their farms are very personal to them,” she said. “It’s hard to determine what would best fit their operation unless you go look. We solve problems for them, and that earns their trust and builds relationships that last a lifetime.”

Serving a mixed customer base that includes row-crop growers, beef producers and diversified farmers, Shelbina is a full-service operation. The retail store features a showroom and warehouse stocked with feed, seed, animal health products and a wide range of farm supply items. Wheat and soybean seed is also treated on site. The adjacent grain elevator has a 500,000-bushel capacity to buy corn, soybeans and wheat.

“We’re slowly working into more precision ag services,” said Trey Neill, Shelbina’s assistant manager. “It’s a small part of our business now, but it’s growing more and more every day. Farmers are feeling the pressure to put the nutrients where they’re needed, and we’re ready to help them when they get there.”

While row-crop business is big for the Shelbina operation, feed has taken the largest leaps since McNamar became manager. 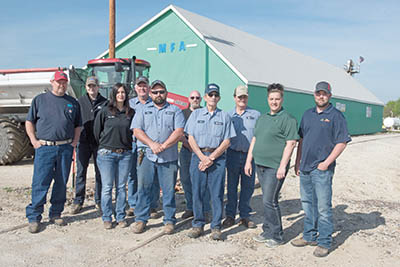 She credits quality products, expert advice and strategic salesmanship with that increase. She also described MFA Incorporated Director of Nutrition Dr. Jim White as the cooperative’s “ace in the hole.”

“We call him regularly, and he’s a tremendous help,” McNamar said. “For our customers, it’s an added perk to be able to say we have our own nutritionist right on the line.”

With support from Dr. White and other MFA feed personnel, McNamar said she and her team work closely with livestock producers to plan nutritional programs based on the concept that “cost per ton of feed is not as important as cost per pound of gain.”

“No one’s feed performs like ours does, and performance determines profitability,” McNamar said. “Take Shield Technology, for example. No other company has that, and it’s amazing. Someone else may have a better price, but I guarantee their products won’t perform like ours. It’s an easy sell when you have the best of what there is to offer.”

“We have a really good bunch of customers. That’s one of the reasons I came here,” she said. “And our employees—where would we be without them? Everyone here adds value to our operation. In fact, one of our employees, Jim Thompson, has been here for more than 44 years! Everything doesn’t always go wonderful every day, but we work together to make sure we get the job done. We all wear a lot of hats, and no one is above doing one thing or another.”

“Getting the job done” often means long hours and extraordinary measures, especially during spring planting and fall harvest, but Neill said that’s all in a day’s work for employees at Shelbina Agri Services.

“Growing up on the farm, I learned as a kid that you work when it was time to work,” said Neill, who began his MFA career as an intern in the spring of 2014 and was hired that December as assistant manager. “That’s how we operate here. It’s not an 8-to-5 job. You’ve got to be there when it’s time to farm. Our customers know they can call us anytime, and we’ll go out of our way to help them.”