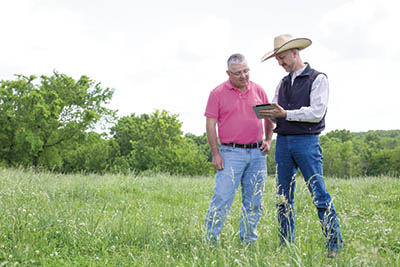 Black wanted to increase his herd numbers on the 2,000-acre farm in Arcadia, Kan., where he and his wife, Cindy, raise beef cattle as a part-time venture. After three consecutive years of drought, however, their pastures were struggling to support the 200 cows they had.

A pasture management expert from Kansas State University had visited the farm for a consultation, but Black didn’t like the diagnosis. In one particular pasture they observed, the university representative told Black that the 160-acre tract would support no more than 40 cows without improving the quality of the forage. The same problem persisted across most of the farm.

“I wasn’t thrilled about what they told me about my grasses,” Black said. “I didn’t think it would be very productive to continue doing what I was doing, so I reached out to MFA. About four years ago, we started on the Nutri-Track program. Since then, we’ve more than doubled the carrying capacity on most of my pastures.”

Black recalled that one of his patients had told him about MFA’s Nutri-Track program, which focuses on a precision approach to field fertility. Soil is grid-sampled and tested every four years to provide a baseline for nutrient levels. From the soil sampling results, MFA’s precision agronomy staff works with growers to build fertility recommendations based on their goals.

Black said that variable-rate method is what initially appealed to him. For years, he’d applied the same amount of fertilizer and lime to all of his pasture ground.

“The attraction for me was to be more cost-effective in the fertilizer I use,” said Black, who divides his time between the farm in Arcadia and his orthopedic practice in Joplin, Mo. “With this program, you’re able to put the fertilizer where it needs to be. I’m able to carry more cattle on the same piece of land and get more use out of the property I own.”

Black splits his fertilizer applications between the fall and spring. In the fall, he applies MFA’s recommendation of phosphorus (P) and potassium (K) for root development and drought resistance along with a small amount of nitrogen “to get a little bit of a bump in the grass in September/October to carry into later in the fall and early winter,” Black said. He applies the remaining nitrogen in the spring, typically 50 units on most of his acreage.

“If he’s got a place that he really wants to push, then we’ll increase that amount,” Sutterby added. “One of the unsaid benefits of the Nutri-Track program is that opportunity to sit down and have a conversation with the producer several times a year about how things are going, where they want to go in the future and how you can help get them there.”

Where growers may see cost savings, however, is in lime application, Sutterby said. Black’s farm is a good example.

“On a little over 1,000 acres of pasture, it only called for 550 tons of lime,” Sutterby said. “So, if he had blanket-applied two tons per acre like we’ve done for decades, he would have applied another 1,500 tons of lime, which is a huge unnecessary expense. What we’ve seen here is similar to what we’ve seen across MFA’s trade territory. About 80 percent of the time, we’ll save enough in lime to pay for the Nutri-Track program.”

While Black’s fall P and K applications are fairly consistent from year to year, he does use Mosaic’s MicroEssentials SZ as a phosphate source over the more traditional diammonium phosphate (DAP). MicroEssentials SZ is a nutrient granule that contains phosphorus in addition to nitrogen, sulphur and zinc.

“We’ve tried to push a lot of our grass customers over to the MicroEssentials SZ product for several reasons,” Sutterby said. “Grass needs sulphur, and this allows us to provide it in two forms—the available sulphate form and elemental sulphur, so you get a short- and long-term source. We also get some zinc, another micronutrient essential to grass production. With the granular format, sulphur and zinc are available in every granule, which allows that phosphate to be more available to the plant.”

Sutterby said he knows premium products like MicroEssentials SZ come with a premium price tag, but he believes it’s a better bang for the buck.

“I feel like it’s a lot of responsibility on my shoulders to take care of the land and the growers I work with,” Sutterby said. “They’re entrusting me to make decisions that are going to affect their bottom line, so I always try to make those decisions with their ultimate benefit in mind.”

Sutterby said he’s seen tremendous success with Nutri-Track since he started with MFA five years ago.

“Since 2012, between my two locations [Hepler and Moran, Kan.] we’ve gone from 2,000 or 3,000 acres to over 90,000 acres now,” he said. “Increasing production, increasing carrying capacity, increasing grass health and ultimately trying to help producers make more money—those are the basics of our program.”

With his pastures, hay and alfalfa fields, Black has a little more than 1,100 acres enrolled in Nutri-Track. He says the program has worked well, and he’s happy with the results. He recently sold 600 bales of hay because he has more than he can feed.

“The hay just gets better and better. We quality-test our hay, and it’s outstanding.” Black said. “We gave the guys that bought our hay all of our test sheets, and they were pretty amazed.”

He also has increased his herd from 200 cows four years ago to almost 350 now.

“We have more and more cattle, and they have lots to eat,” Black said. “We could push it further if we wanted, but with this being my second job, the question becomes, ‘How hard do I want to work?’ But, we have plenty of grass—plenty of good grass.”

For more information on Nutri-Track, contact your MFA Agri Services or AGChoice and ask for the precision specialist in your area or visit online at http://mfa.ag/nutri-track.