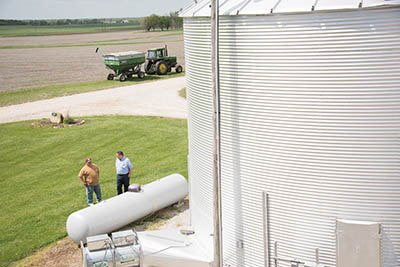 Go beyond the house, however, and you’ll find that propane also has an important place on the farm. Agricultural uses for propane include irrigating fields, drying grain, powering equipment, and heating animal confinement facilities and greenhouses. In fact, some 40 percent of U.S. farms use propane in their operations, according to the Propane Education and Research Council.

Availability and affordability are two big reasons why farmers and rural homeowners use propane as an alternative to electricity, natural gas or diesel. In many areas, it may be the only energy option. In other cases, it’s the choice that is most economical, efficient and environmentally friendly.

For Aaron Ray Collett, who built three large poultry barns last year on his farm near Warrensburg, Mo., reliability made propane the most attractive option to power the heaters that provide optimum temperatures for the broilers he raises on contract with Tyson.

“You need heaters running at full capacity on a cold windy day in January, or you start losing chickens,” Collett said. A computerized system monitors the barns, and when the temperature goes above or below a pre-set range, the system calls his cell phone or one of his family partners: his wife, Colette; son, Curtis; and Curtis’s wife, Tabbatha.

Each chicken barn, which spans the length of two football fields, is equipped with three 1,000-gallon tanks to power 52 heaters that are 40,000-Btu each. In the winter, the new chicks must be kept at 88 degrees. By the time they’re ready for processing about seven weeks later, the computer system has gradually lowered the temperature 52 degrees.

Collett carefully monitors tank levels, and when supply falls to 45 percent, he orders a delivery from MFA Oil Company, a farmer-owned cooperative that’s the seventh-largest propane retailer in the U.S. today. The company, which was established by MFA Incorporated in 1929, began delivering propane to farmers in the 1960s. The two cooperatives split apart by mutual agreement in 1985, but continue a close working relationship. Today, propane accounts for 34 percent of MFA Oil’s annual earnings. The company also sells refined petroleum and operates convenience stores and retail automotive franchises.

“When you’re raising 114,000 chickens, you’ve got to have a dependable, guaranteed source of propane,” said Collett, who also raises cow/calf pairs along with corn and soybeans. “We’ve been with MFA Oil for years, and we’re well satisfied.”

Fuel for the field

Along with animal production facilities, propane is also prominent in many row-crop operations. In fact, more than 90 percent of the nation’s grain bin dryers use propane as their energy source, according to PERC.

Having a reliable system for drying grain quickly is important for both efficiency and profitability on the farm of John “Junior” Mehrens in Lincoln, Mo. He uses propane to power the dryers on three 12,000-bushel grain bins where he stores the harvest from his 1,400 acres of corn, soybeans and wheat.

“Propane has really paid off the last several years at harvest for me,” Mehrens said. “I don’t have enough storage for all my corn, especially since we’ve had such good yields. In two to three days, I can have the whole bin dry with propane and get it hauled out as quickly as possible so I can hold the rest of my crop.”

Two 1,000-gallon propane tanks—also filled by MFA Oil—fuel the grain bin dryers. Mehrens, who double-crops his wheat with soybeans, said the fast drying capability helps him preserve the integrity of his grain while allowing him to manage his crop rotation more effectively.

“I grow quite a bit of wheat, and whenever you can harvest it early, you get a better quality grain,” he explained. “Then, if you dry it right, you can keep that quality. It’s so much better, and I can get back in the field to plant beans sooner.”

Propane will also be powering the large-capacity dryers at MFA Incorporated’s new high-speed grain-handling operation in north central Missouri near Hamilton. When completed in June, the rail facility will consist of 2 million bushels of permanent storage and 1.5 million bushels of temporary storage.

“It takes a lot of propane to run grain dryers of this capacity,” said Craig Childs, MFA senior vice president of Agri Services. “We will be able to dry up to 5,000 bushels per hour.”

The project is a joint venture with MFA Oil, which installed a 60,000-gallon propane tank on site to handle the grain-drying needs.

“First of all, the closest natural gas line is two miles away, and the cost to move it is about $1 million per mile,” said Mitch Dawson, MFA Incorporated director of grain operations. “That, coupled with the fact that we’re partners with MFA Oil, just made sense to go the propane route. They made putting in that large tank so economical, it was no comparison.”

“We are seeing a large increase in demand from irrigators who use propane to fuel their pumps instead of diesel,” Ihler said. “We also see some farmers using portable propane-powered burners to control weeds in their fields.” 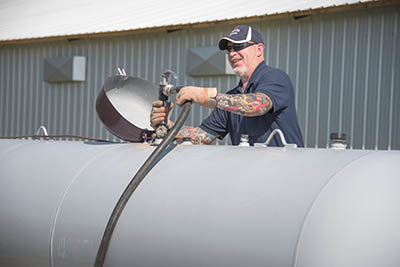 For five years now, the Propane Education and Research Council has gathered research on farmers who switch to propane. The council’s studies show that farmers are seeing high performance ratings, improved efficiency and significant cost savings when switching to propane-powered farm equipment, according to Cinch Munson, PERC director of ag business development.

“Over 400 producers from 32 states have reduced fuel costs by an average of 49 percent when compared to similar diesel engines,” he said. “In addition, propane grain dryer operators saved an average of nearly 40 percent and gained more efficient energy consumption.”

While the models and type of propane equipment varied over the years and among farmers, Munson continued, more than 90 percent of participants rated engine and equipment performance as a 4 or 5 on a 5-point scale, with 5 being high-performing.

PERC, which is funded by the propane industry through a check-off program similar to corn and soybean check-offs, is also working with companies to develop new technology in propane-powered equipment such as irrigation engines, grain dryers, flame-weeding systems and more.

In addition to efficiencies in costs and consumption, propane is a domestic product, and supply is abundant and reliable. More than 98 percent of propane consumed in the U.S. is produced in North America. Plus, propane allows farmers the flexibility to place power where they need it. There’s no need to locate near natural gas or run a new electric line: the propane will come to you.

“Propane is a vital, economical energy source for rural America,” Ihler said. “And it remains a good buy for farmers.”

Now’s the time to fill the tank

While propane prices fluctuate throughout the year, they generally rise with higher demand in the winter when people need more to heat homes and businesses, Ihler explained.

“Historically, late spring through August is a good time to buy,” he said. “You get your best buys when demand falls. We encourage customers to keep their tanks full because it helps spread the demand throughout the year.”

For more information on propane programs and options, visit your MFA Oil retailer or online at www.mfaoil.com/productsservices/propane.