After Sam Gosche passed away in 1985, the general store he owned and operated sat uninhabited and unused, except for storage, for nearly 30 years. While walking

“My brother and neighbor were talking about getting together before they tore the building down,” Schlitt said. “So being nosy, I asked them, ‘What building?’ and they told me it was the store.”

The Gosche General store (formerly Caney General Store) was built in the early 1900s by Frank Amrhein in Oran, Mo., where Schlitt grew up and still resides on three acres. Amrhein was a logger by trade, and the nearby Caney Creek Station was a small railroad depot on the route to St. Louis.

“Amrhein built a two-story originally,” Schlitt said. “The bottom floor was half-store and half-living quarters for the Amrhein family. The second story was bedrooms and a dance hall. The story goes when they danced, the whole building shook, and I can believe it.”

According to Schlitt, the store caught fire sometime in the 1920s. Amrhein salvaged what he could from the structure and separated the living quarters from the store when he rebuilt. Roughly 20 years later, Amrhein sold the store to Sam Gosche, just before the start of World War II.

Gosche went into the military but struck a deal with Amrhein before he left.

“Sam told Frank he wanted to sell the store to him for $1,” Schlitt said. “If he made it home from the war, Frank agreed he would sell it back to him. And that’s what happened. Sam went to war and came back. He got malaria during the war, but still came back and took over the store.”

According to the Missouri Census Data Center, the population of Oran hovered around 1,100 people throughout the 1940s and ’50s. Part polling place, grocery and feed store, event center and Sunday afternoon respite, the general store functioned as the community gathering place for decades. That’s how Schlitt remembers the general store best.

“My grandpa’s farm and house were about an eighth of a mile east from where the store was located,” Schlitt said. “So my dad, my aunts and uncles, my neighbors and friends all went by that store. It’s hard telling how many times they put their hand on this old counter.”

So that day in April after church when Schlitt overheard his brother and his neighbor talking about demolishing the old, dilapidated building, he thought about the significance it held.

“My wife [Mary] had never seen it,” Schlitt said. “So we asked if we could come down and take a look. When we walked in, you could just feel all the emotion from years ago and all the people who were there.”
Schlitt spent some time reflecting on the memories inside the store, even contemplating moving the old counter to his place, but ultimately he and Mary left that day without giving it further thought.

But Schlitt was struck with another idea on his way to Farmington, Mo., for work one day.

“I started seeing all of these houses and old barns on rock foundations,” Schlitt said. “Then I started thinking about a house we had moved in ’69 off the farm and into town. I thought, ‘We can move that thing.’ On my way home, I stopped at the neighbors’ and asked him, ‘What would you say if I were to move that store out to my house?’ And he said, ‘Today, it’d be free.’”

Schlitt called Johnson House Movers in Senath, Mo., and they were willing to take on the job. Preparation for the move took about 12 days total once the foundation on Schlitt’s property was finished. The actual move only took about 30-40 minutes.
“The store only moved 1.25 miles from its original location,” Schlitt said. “We started about 8:15 in the morning, and it was sitting over here on the foundation about 8:45. They came down the road at 15 miles per hour.”

Once the movers left, restoration began. 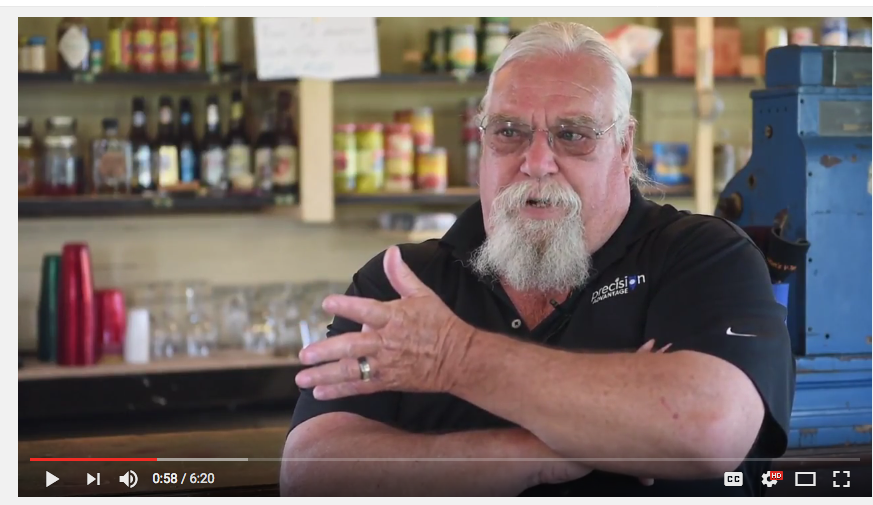 Schlitt wanted to restore the building to its 1940s condition—back to the way he and so many others remember it. The store was moved July 22, 2014, and by January 2015, Schlitt completed most of the renovations, which included repairing and repainting the siding and sealing the roof. He also installed exterior doors from his great-grandfather’s house built in 1912. All of the windows were fixed or replaced. It continues to be a work in progress as Schlitt adds farming and local memorabilia to the interior.

Eventually, Schlitt plans to hold monthly events at the store with the proceeds going to Alzheimer’s research, he said.

“My grandmother and a few other family members have had Alzheimer’s,” Schlitt explained. “Victims of Alzheimer’s might not remember seeing you today, but they might remember something that happened 40 years ago.”

Though the store is not open to the public, tours can be arranged by contacting Schlitt at 573-887-1900 or This email address is being protected from spambots. You need JavaScript enabled to view it..

“It’s kind of like we’re just going back in time to a much simpler life,” he said.

Click here to SEE Kenny tell the story himself.