Steve Hobbs has spent the last several months hauling more than 60 truckloads of his 2016 grain crop from his farm near Mexico, Mo., to a nearby ethanol plant and MFA Agri Services of Laddonia. As Hobbs drives his loaded semi-truck across the rural roads, he tracks their conditions from two perspectives: as a farmer and as presiding commissioner of Audrain County.

Hobbs and his fellow commissioners are responsible for county infrastructure such as roads and bridges, which are a vital link for farmers and agribusinesses.

“Road conditions vary from county to county, but there’s constant pressure on county road budgets,” said Hobbs, who is also president of the County Commissioners Association of Missouri and previously served in the state legislature for eight years, including a stint as chairman of a transportation committee. “Farm-to-market lettered roads are deteriorating rapidly.”

Hobbs raised 1,100 acres of crops in 2016. He considers himself a small operator by local standards, but, like many other farmers, he’s hauling more grain these days. Over the years, U.S. farmers have steadily increased corn and soybean production. As yields rose and farm sizes grew, transportation methods and equipment changed.

“Almost every farmer around here has an 18-wheeler,” Hobbs said. “The frequency of our trips has gone way up, along with the weight of our loads.”

“When our roads and bridges were created decades ago, builders didn’t have the 21st century in mind,” Steenhoek said. “They weren’t designed for semis carrying 900 bushels of soybeans and 950 bushels of corn.”

Most rural communities have seen bridges closed or weight-restricted, and some roads are going from paved to gravel, he added.

“Rural roads and bridges are the most under-appropriated and under-recognized mode,” Steenhoek said. “Railroads and barges wouldn’t matter without roads. One hundred percent of all farm output must first move by roads. And the closer you get to the farm, the worse they get.”

While conditions of federal and state roads in MFA territory get high marks, rural roads don’t earn many accolades. TRIP, a non-profit transportation research group, offers these statistics to illustrate the problem across the U.S.:

Poor road conditions mean more than a bumpy ride for farmers. They may affect the ability to export grain efficiently, which could hit U.S. farmers on the bottom line—especially in soybean-exporting states like Missouri.

The Missouri Soybean Association points out that other soybean-producing countries and regions are investing in their infrastructure.

“If we aren’t doing the same, it’s going to become more challenging to compete in the global marketplace,” said Casey Wasser, MSA’s director of policy.

“This gives growers more opportunity to strategically market their grain,” he said. “Our transportation network that moves grain out of the country is more reliable than a country like Brazil, but we have concerns about the direction our roadways are heading.”

As agribusiness grows, so does the use of roads and bridges. MFA deploys about 225 over-the-road trucks as well as other vehicles such as sprayers and fertilizer spreaders to move grain and farm supplies to and from 200 Agri Services and AGChoice locations in Missouri and surrounding states, according to Bill Dunn, director of transportation for MFA Incorporated. Besides deteriorating conditions, road congestion, especially on I-70, often poses a problem for MFA drivers, he added.

“In most counties, car traffic hasn’t increased, but truck traffic is up due to increased agricultural production,” he said. “A lot of rural bridges are being closed due to a lack of funding.

One solution to reduce traffic is to increase weight limits on roads and bridges. With higher weight limits, fewer vehicles would be needed to haul the same amount of product. The National Association of State Departments of Agriculture, the Soy Transportation Coalition and other agricultural groups support the concept, as long as haulers spread the added weight over additional axles to minimize road and bridge wear and tear.

The Kansas legislature is currently considering a bill that would provide permits for increased weights with more axles, and Missouri lawmakers recently allowed grain haulers to transport 10 percent more than the legal weight limit, which is based on the distance between consecutive axles and total number of axles of the vehicle.

Each state collects federal and state fuel taxes to fund roads and bridges, and some of those funds are shared with counties and municipalities to maintain rural infrastructure. However, fuel tax revenues are falling as more efficient vehicles use less fuel. At the same time, the cost of construction and labor continues to rise, and many states divert state fuel tax funds to other purposes when they hit a budget crunch.

“America’s fuel taxes are unsustainable,” Steenhoek says. “They no longer pay what’s needed to build and maintain roads and bridges. We urge farmers to get active and urge state and local leaders to support increased funding for farm-to-market transportation infrastructure. Tax increases are unpopular, but we need to do a better job of selling the idea.”

Here’s a summary of taxes drivers in MFA country pay at the pump:

The federal excise tax is 18.4 cents a gallon for gasoline and 24.4 cents for diesel. These taxes haven’t increased since 1993.

Missouri has one of the lowest state fuel taxes in the nation at 17 cents a gallon for both gas and diesel, and this hasn’t gone up since 1996. All but three other states assess a higher gas and diesel tax.

In Arkansas, the gas tax stands at 21.5 cents per gallon, about 5 cents below the national average. The diesel tax is 22.5 cents. Arkansas ranks among the 15 states with the lowest fuel taxes.

Kansas last hiked fuel taxes in 2003 to 24 cents per gallon on gas and 26 cents for diesel; about two-thirds of all states assess higher fuel taxes than Kansas.

Iowa raised its fuel taxes as recently as July 2015, when it increased the gas tax to 30.8 cents a gallon and diesel to 32.5 cents.

While most rural groups agree that more needs to be spent on rural roads, Hobbs reports that the Missouri Department of Transportation is in a funding crunch.

“They’ve tried to get additional funding from the voters a couple of times, but now they’re closing bridges across the state,” he said. “I don’t know the answer, but if we go much longer, it will be a huge burden when we have to rebuild our roads and bridges.” 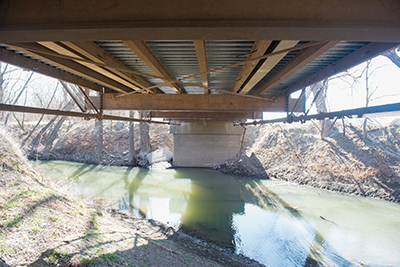 In 2016, Missouri Farm Bureau testified in favor of a 6-cent state fuel tax increase to be submitted to the public for approval, but it failed to be moved out of the legislature. Another proposal to raise the fuel tax has been introduced for 2017. Missouri Farm Bureau President Blake Hurst says the organization supports additional funding through the fuel tax, sales tax and/or vehicle fees if MoDOT ensures fair distribution of funding between urban and rural areas.

“The last time we increased gas taxes in Missouri was in 1996, and the corn crop was around 350 million bushels,” Hurst said. “In 2016, Missouri farmers harvested around 600 million bushels of corn. That’s a huge increase in the use of farm-to-market roads, while inflation-adjusted road spending has been cut in half. Without a turnaround in funding, we face increasing delays and repair costs.”

“In our fall 2016 policy survey, on a proposal to raise Missouri’s motor fuel tax to 22.9 cents per gallon, 59 percent of farmers favored the increase,” said MSA’s Wasser.

“They’re willing to pay for it as long as rural roads get attention,” said Kinne. “Just this week I talked to a grower who changed the market he delivers to due to road conditions.”

One such example is Hobbs’s Audrain County, where a 15-person crew maintains more than 200 bridges and 700 miles of roads operating on a $3 million annual budget. In 1985, voters approved a half-cent sales tax for bridge replacement. The funds were used to replace 170 bridges 20 feet or longer in the county, with the last two scheduled to be replaced in the next couple of years. That half-cent sales tax expired in 2010.

Audrain County voters recently approved another quarter-cent sales tax that provides $600,000 to replace smaller bridges. Hobbs estimates it will take 10 to 20 years to complete those projects.

“Our most recent sales tax increase passed easily, but a lot of counties don’t have that kind of support,” Hobbs said. “Funds are there for us in Audrain County, and we’re getting closer to meeting farmers’ needs. For some other counties, things are getting critical.”