Making an impact on precision ag 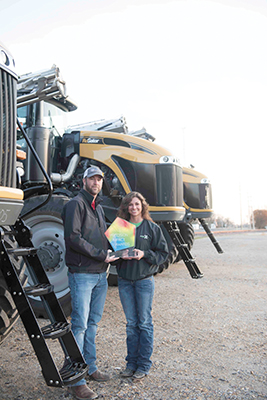 From a handful of early-adopting growers in 1999 to widespread use across its entire trade territory, MFA Agri Services in Bernie, Mo., has grown its precision agriculture program exponentially over the past 18 years.

Now, the program has not only gained the attention of growers who see the value in these high-tech services, but Bernie MFA has also captured national recognition as one of three retailers that received the 2016 Precision Impact Award.

The award, sponsored by the Agricultural Retailers Association (ARA), SST Software and AgPro Magazine, recognizes local retail operations for their use of technology, input efficiency, grower engagement, environmental stewardship, innovation and profitability. A panel of precision technology experts and AgPro staff evaluated the nominations and determined the winners, who were honored during the annual ARA meeting Dec. 1 in Orlando.

“This award shows how committed MFA is to stewardship and improving growers’ efficiency in all parts of their operation,” said Thad Becker, MFA Incorporated precision agronomy manager. “I know all of the Bernie employees work hard to deliver the best product possible for their customers. Whether it’s collecting data from the producer, pulling soil samples, advising the grower on the results or making careful application of product, the Bernie team strives to put the ‘4Rs’ into practice—the Right Source, Right Rate, Right Time and Right Place.”

Jarrod Smith, manager, and Tayler McLane, precision agronomist for the Bernie MFA location, received a complimentary trip to the meeting to accept the award on behalf of MFA. McLane is one of the first two women to be part of a Precision Impact Award-winning team, according to AgPro Editor Rhonda Brooks. Simplot’s Amanda Krebs is the other.

“It’s a big honor—I didn’t realize how big until I got there,” McLane said. “It’s good for us, good for MFA and good for the growers who have supported our precision ag program. We couldn’t have done this without them.”

Retailers who want to compete for the award submit an extensive entry that explains how they work with farmers, what technologies they use, how they invest in employees’ knowledge, how they maximize input efficiency and how they follow the “4R” philosophy.

“The main factor that caught the judges’ attention was how Bernie MFA has helped farmers save money and make money by using precision technology,” Brooks said. “And they have the data and expertise to demonstrate it.”

She sampled some 8,500 acres last fall and provided growers with variable-rate prescriptions for crop nutrients, crop protection and planting rates and assistance with seed selection based on management zones within the field.

“Tradition runs deep in the Bootheel, and we had some guys who were slow to get on board,” McLane explained. “At first, they’d only let us do one field here and there, but as soon as they saw how much they could save by allocating their input dollars where they should go through precision sampling and variable-rate applications, they changed their whole farm over to the technology.”

Overall, the Bernie MFA team custom-applied fertilizer on more than 75,000 acres and custom-sprayed around 35,000 acres last year. The staff is continually trained and equipment updated regularly to stay current with the latest technology and satisfy customer needs.

“We put a lot of emphasis on precision ag at Bernie MFA,” Smith said. “We feel like if you’re not on the precision train, you’re going to be left behind.”

Along with cost savings from input efficiency, yield increases have also helped drive adoption among growers, he added. In some instances, precision ag practices have helped customers boost corn yields from averages of 170 bushels per acre to 230 bushels per acre and increase soybean yields by 15 to 20 percent.

“We have landlords calling us now—not just farmers—wanting us to sample their fields because of the yield increases we’ve seen,” Smith said. “We’re not just providing a service here. We’re building farms.”