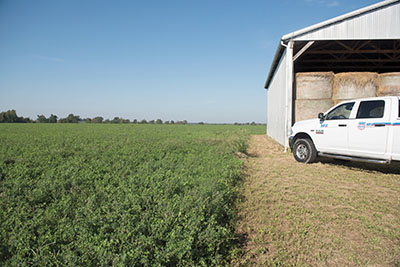 In the rolling hills of southwest Missouri, stands of forage can look dramatically different from one field to the next. Differences in soil quality, health and fertility can be even more dramatic. But on the inaugural MFA Forage Tour, attendees discovered what eight fields in this area have in common—precision practices and the MFA Nutri-Track program.

The Nutri-Track program manages soil fertility on an acre-by-acre basis, giving farmers the information needed and the application technology to adjust fertilizer application rates by zones. The seven-stop tour covered three fields at Wilmoth Ranch in Mount Vernon, Mo., and four fields at Gourley Land and Cattle near Crane, Mo.

“Greg was tired of raising and feeding common fescue hay,” Watson said. “He wanted to increase his pasture, and if he was going to supplement hay in any way, he wanted to supplement using good quality forages and increased baleage.”

Wilmoth set a six-ton-per-acre yield goal for this field and intended to continue a build application for fertility.

“When we talk about fertility builds, we’re talking about getting levels in the soil built to optimum. For example, if phosphorus’s optimum level is 22 ppm (parts per million), but our soil test shows we are at 18 ppm, we are going to apply enough fertilizer in the first year to raise it from 18 to 19, the next year from 19 to 20 and so on. In a perfect scenario, we would leave enough fertilizer for the soil to build 25 percent every year for four years while still accounting for crop removal.

The Wilmoth’s purchased additional land for baleage production from a nearby farm in 2012. On the surface, this piece of land appeared to be one field, but results from soil sampling in February 2015 told a different story.

In spring 2015, both fields produced 2.8 tons per acre of wheat baleage. That summer, the east field produced 70 bushels per acre of soybeans, exceeding Wilmoth’s yield goal by 20 bushels. That extra production meant he would need to account for increased crop removal of potassium the next year.

“The soil is an ever-changing environment,” Preston said. “Ideally the K levels in this field would be in the 150 to 200 ppm range, but it will take more than one year to get there,” Preston said. “This field didn’t get to where it is in one year (60 to 80 ppm) and it’s not going to get back there in one year, which is why we develop four-year recommendations.”

Next stop: an underused pasture. Wilmoth previously used this field as a go-between from the main road to high-producing hay fields. He occasionally grazed cattle here, but never for extended periods of time due to the road access.

Sampling showed adequate soil fertility, so Wilmoth decided to switch the field to Bermuda hay production. To renovate, Wilmoth applied a herbicide burndown and planted soybeans in summer 2015 as a smother crop. In May 2016 he sprigged in Bermudagrass and took the first cutting in August.

Billy Gourley took over the management of Gourley Land and Cattle four years ago when he moved back from Colorado. A local grower previously leased this land from his family and used it for cattle pasture. He wanted to boost forage production.

“He knows where he wants to go and what direction he’s headed. His goal is to have the entire place be rotational grazing and to feed as little hay as possible,” Watson said.

But to do this required work. Sericea lespedeza and other invasive species had taken over the forage ground. Gourley wanted to knock out the endophyte-infected fescue and replace it with novel endophyte interseeded with clover. He also wanted to manage a broomsedge infestation. Gourley enrolled 1,500 acres in the Nutri-Track Program.

Gourley knew one of the first steps of renovation required removal of the Sericea lespedeza. He also plans to interseed clover in this pasture. In early July 2016, Gourley applied a formulation of Pasturegard HL and Astute Xtra specifically targeting the Sericea. Once he had interseeded clover, there were few herbicides he could use without also killing the clover.

“Weed control needs to be at the front of your mind right along with fertility. There’s no sense of spending a bunch of money on fertility if all we’re going to do is keep feeding weeds,” MFA Field Crops ASM Ben Fizette said during the tour. “It can be an overwhelming task trying to figure out what chemical we need to use to kill which weeds and at what time of year. My advice is to find your worst weed or worst brush problem first and tackle it. There’s no definitive way to kill them all at one time.” 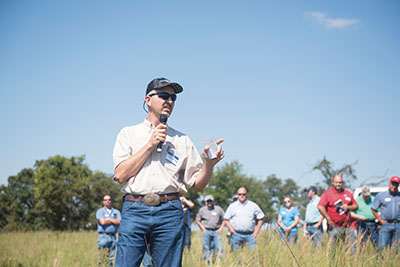 Gourley began working with the NRCS in 2014 to interseed clover through a cost-share program. The program reimbursed him 75 percent of seed costs as long as minimal fertility requirements were met. Gourley had worked with MFA the past January to raise the pH levels in this field with a variable-rate lime application. When the soil was resampled for the NRCS, the lowest sample taken was 6.3, indicating the pH had been corrected, allowing him to get approval to begin seeding.

Gourley settled in on Bar Optima as an endophyte-friendly fescue option.

“Fescue is what made Missouri cattle country,” Fizette said. “But the issue with the endophytes in something like Kentucky 31 is it’s a vasoconstrictor. It causes the blood vessels to constrict, especially in ruminants. But the endophytes are also what provides the fescue disease tolerance. The beauty of the novel endophyte fescue is it has virtually the same disease and drought resistance as Kentucky 31, but it’s not harmful to cattle.”

Gourley worked with NRCS again to establish the novel-
endophyte fescue stand. Like the clover interseeding program, he had to meet required minimum fertility levels. MFA’s precision specialists made a variable-rate recommendation using the University of Missouri’s formulations for cool-season grasses. In 2014 and 2015, like Wilmoth, he applied glyphosate burndowns followed by planting a smother crop for weed control. In spring of 2016, he did a final burndown followed by planting Bar Optima fescue.

Broomsedge, a native grass that thrives in soils low in phosphorus, covered the last field of the tour. In early 2016, Gourley applied variable-rate lime to correct pH levels. Because phosphorus tends to be less available in acidic soils, low pH can elevate the phosphorus issue allowing Broomsedge to take over. Often, a lime application will solve the Broomsedge issue, but that wasn’t the case for Gourley.

“This is a classic example of someone thinking they need more lime when what’s really missing is phosphorous,” Watson said. “Only 37 of the 90 acres needed a pH correction. Lime used to be the solution, but as we’ve gotten more aggressive with our haying equipment, what’s actually happening is we’ve taken out more phosphorous than we’ve put back in.”

Gourley began applying the recommended phosphorus and potassium in fall 2016.

The level of nutrients in your soils can strongly impact your livelihood. The University of Missouri and USDA both recommend soil be retested every 3 to 5 years for optimal performance. The Nutri-Track Program helps growers conduct these soil tests and conserve inputs by putting them precisely where they are needed for greatest yield potential.

“What the Nutri-Track program allows us to do is sit down with growers at least once a year and have conversations about soil fertility. We’ll talk about where we’re going, what the plan was, what we’ve done and where we’re headed. I think that’s the most valuable thing we get out of the Nutri-Track program,” said Jason Sutterby, AgChoice precision farming specialist. “Cattle prices have dropped, and fertilizer prices have dropped. But the most expensive forage we can feed is hay. What we need to think about now is maybe it’s time we invest in some fertility. If we can grow more grass on the same acres and utilize tools like rotational grazing we can be much more efficient overall.”