Written by Steve Fairchild on December 16 2016. 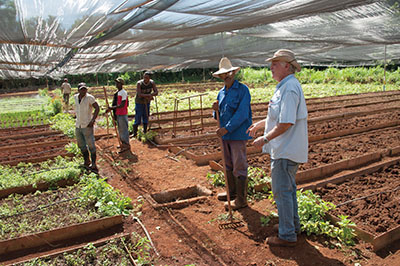 Flying into Cuba, a farm boy does what farm boys do: size up the land—the shape of fields, the color of the soil, the nature of the outbuildings. A bird’s eye view of agriculture offers great insight. As our charter flight doglegged from the Florida Straits over Havana and to the Jose Marti International Airport, the open country offered more questions than answers. I wondered why so many crop fields were isolated from others. There was no knit patchwork of crops as you see flying into arable regions in North America or Europe. The landscape was uniformly scrub land punctuated with something more organized here and there. From a Midwest viewpoint at altitude, there was an incoherency to the land. But then, for many Americans, Cuba is incoherency embodied. It is a country that since the 1960s has been an abstraction to many of us. Cuba has been politics more than place.

An object lesson about Cuba is revealed once you clear customs at Havana’s international airport. It is hard to navigate the crowd at the baggage claim. The trouble isn’t so much a sheer throng of people; it’s that movement is made difficult by the quantity of shrink-wrapped merchandise coming in from Miami. Flat-screen TVs. Furniture. Large unidentifiable blobs wrapped in plastic. You get the immediate sense that while official trade between Cuba and the United States is limited by a stringent set of rules, the freelance importer is hard at work and paying for plenty of airfare along the way. Human enterprise is irrepressible, and that’s something Cuban officials not only recognize but—slowly and carefully—seek to capitalize on. Land reforms and liberalization of private enterprises lead the way, but the Cuban government remains cagey on how quickly to unleash private enterprise and what role trade with the United States might play in the country’s evolution.

While political relations between Cuba and the United States are a long way from harmonious, there have been milestones towards normalization. The U.S. has been exporting agricultural goods to the island since 2000. And the Obama administration made significant overtures to open U.S. citizen travel to Cuba.

Because the Cuban diet features rice and poultry, farmers in MFA’s trade territory would be among those who most benefit from normalized trade. So how soon can we start selling? It’s complicated. And it’s likely to remain that way for a while.

Cuba is in a new socio-political epoch. As the 1990s began, the departure of Soviet influence and subsidies left Cuba’s post-revolutionary planned economy in free-fall. The Cuban GDP dropped by 35 percent in one year, and the country lost some 85 percent of its trade volume. For agriculture, that meant a huge decline in the availability of fertilizer, herbicide, seed and other farm inputs. For an example of how this affected both the farm and export trade, consider sugar, one of Cuba’s largest exports. Sugar production fell from 8.4 million metric tons of production in 1989-90 to just 1.1 million metric tons in 2010-11 according to the USDA. Gone was Soviet purchase of sugar at artificially inflated prices to support Cuban agriculture. In the wake of that economic shift, lack of inputs, neglected infrastructure and the ability to commit labor to farm under such difficult conditions stifled Cuba’s agricultural sector. The view from the airplane wasn’t disorganized crop fields—it was abandoned farmland. By 2008, the country was importing between 60 and 80 percent of its food supply, representing an unsustainable cost.

Cubans call the time directly after the Soviet departure the “Special Period.” It was a time of critical economic want and food shortages. Government officials and citizens alike told us that no one wants a return of those conditions. To avoid future food shortages, and just as importantly, to avoid the cost of importing food, the government has implemented multiple land reforms and liberalized food policies since the 1990s.

One early reform allowed the formation of agricultural cooperatives. Under these cooperatives, the state retains ownership of the land, but allows some autonomy on the farms and provides credit for purchase of inputs. Under more recent reforms, the government is offering 10-year farming options on 33-acre parcels. Land is available to anyone who wants to farm it, but there are annual production benchmarks to meet if the producer intends to keep the “lease.” And production is taxed.

We visited a cooperative organic farm called Organopónico Vivero Alamar (Alamar Nursery) on the outskirts of Havana. The cooperative was formed in 1997 as a project to feed the surrounding neighborhood and has grown from an 800-square foot garden to a 27-acre farm. Vivero Alamar is led by Miguel Ángel Salcines López, a former government agronomist, who told us that the adoption of organic methods in Cuba was a necessity coming out of the Special Period. “It was proven,” he said, “Either we produce organically or we starve.” In the mean time, Salcines has honed the organic techniques employed on the farm and believes that if trade with the United States normalized, Cuba would stand a chance to provide the United States with organic produce. Today, Vivero Alamar employs 120 people and delivers some 300 tons of vegetables to market each year.

A visit to Vivero Alamar provided ground truth that cooperative farms can be successful under the Cuban government, but there are distinct challenges ahead if the government intends to make continued concessions to private enterprises and collect taxes as part of the bargain.

Jorge Mario Sánchez Egozcue, a Cuban economist from the University of Havana, told us that to understand the challenges, first you must become accustomed to the complexity. In implementing taxes in a planned economy, the government is pushing a new reality, a different socio-economic reality on a population that has never paid taxes. “When a person has never paid taxes in their life, he is accustomed to believe that is the reality of the world,” he said. “How do you build a taxpayer culture overnight? How do you introduce a new tax system? It has to be a very simple one in order to be understood by everyone and applied effectively.”

Sánchez said that for new economic realities to work, the population must support them. The change needs to come from both the decision-makers and the citizens. “You don’t build autonomy just because you say it. You don’t build competitiveness just because you want it. You don’t build confidence just because somebody tells you that you have to. So you own the land, you have the credit, you have everything you need. It doesn’t mean that you’re going to behave as a competitive, efficient producer. The more likely scenario is you will continue to preserve the old habits in a new environment with new language.”

Sánchez said all this not as a critic of change, but as a long-time observer of economics both in Cuba and abroad. Regardless of pace or expected outcome, when the state is in charge of business, the reforms will have to begin as a state decision.

Tourism’s cash could lead the way

Part of the Cuban state’s decision-making paradigm is led by the potential for tourism, but a conundrum looms. There are American investors actively seeking agreements on the island. Tourism brings hard cash, yet tourists in the millions will put additional pressure on home-grown food supplies, potentially increasing the amount of imported food. Increased food purchases from other countries would exacerbate unsustainable import costs to the national budget, running up deficits and further eroding the ability for the Cuban government to find favorable credit. Under current restrictions, U.S. agricultural products sold into the Cuban market must be purchased using cash or through third-party guarantees from foreign banks.

You can see why credit is an critical factor going forward. At every turn, from farmer and government official alike, Cubans told us they need two things to improve their economy: an end of the U.S. embargo and the ability to purchase imports with credit.

Even if the economics line out, however, the Cuban government is wary of an uncontrolled influx of tourists and development. Our group was told by several speakers that Cuba is much more than sun, fun and mojitos. Another recurring theme was that a McDonald’s around every corner is not the future for Cuba. Still, the lure of tourism cash and what it would portend for the economy seemed central to thinking about the future in Cuba.

What it could mean for U.S. agriculture

Perspective is required to understand Cuba as an export market versus Cuba as a political issue. The country is big for the Caribbean but small in comparison to other U.S. agricultural export markets. About the size of Pennsylvania, Cuba has some 11 million people. Eleven million people is a rounding error when we talk about China’s population and export potential, yet Cuba’s proximity to the United States gives our market a distinct edge in logistics and delivery costs for agricultural exports. The United States was a leading exporter to Cuba before 1960. Of course when you talk about then and now, you are leaping over a chasm that has lasted a couple of generations. Pre-revolutionary Cuba was among the top 10 destinations for U.S. agricultural exports. Back then, rice, lard, pork and wheat flour were the leading exports. Cuba was sometimes our largest rice customer, purchasing about a third of our total exports. In today’s prices, 1958 agricultural trade volume to Cuba would be more than $600 million. If Cuba were to purchase as much rice now as it did then, the country would be in our top 10 export destinations for the crop—and, as mentioned previously, at a tremendous delivery advantage.

The Trade Sanctions Reform and Export Enhancement Act, implemented in 2000, provided certain exemptions to the embargo for U.S. agricultural exports. In the following years, agricultural exports to Cuba climbed steadily, jumping to approximately $700 million by 2008, partly as a result of Hurricane Ike. U.S. exports have since fallen, however, due to the cash-only trade restrictions seen as too onerous by Cuban officials.

The question is, what happens next? Will Cuban economic reforms last? If so, will they grow the Cuban economy past its near stasis? Will U.S.-Cuban relations relax enough to allow tourism and food imports? Injections of credit and capital into the Cuban economy could create a different picture for U.S. exports.

The ebb and flow of political tides

Not too long after our return from Cuba, the U.S. election ramped up to its most tumultuous pitch with a Trump administration emerging. A few weeks later, Fidel Castro died. What these events augur for U.S.-Cuban relations is speculation at this point. Regardless of how the two nations’ political status proceeds, governments across the world are negotiating with Cuba on a number of fronts.

Our group’s base of operations was the Hotel Nacional de Cuba, a historic Havana fixture and host to celebrities and diplomats. Early in our trip we noticed a serious-minded security contingent on hand. It belonged to President of Iran Hassan Rouhani, who was also staying at the hotel. According to reports from Granma, Cuba’s state newspaper, Rouhani was there to reaffirm “friendly ties” between the two countries and discuss the importance of food production. Later during our trip, a satellite truck set up at the hotel to beam news home to Japan. Japanese Prime Minister Shinzo Abe met with Raul and Fidel Castro on our last day in Cuba, reportedly to discuss expanding trade relations.

There are no vacuums in trade or world politics.