What's up with conservation

Written by Nancy Jorgensen on November 01 2016. 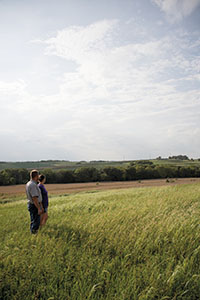 In Kansas the Symms family shines. Matt and Stephanie Symns won the 2014 Kansas Farm Bureau Natural Resources Award for work on their farm near Atchison, Kan.

“Conservation is critical to maintaining a productive farm,” said Matt Symns. “We would rather take the time and make the effort to protect our soil, our most important natural resource, than watch it erode away.”

The Symnses raise 900 acres of corn, 850 acres of soybeans and 300 acres of hay, and graze 65 head of cattle. They operate on small field sizes with highly erodible soils on mostly upland hilly terrain with some creek bottoms. USDA’s Natural Resources Conservation Service has provided financial and technical help for many of their conservation efforts.

Matt is responsible for the day-to-day farm work. Stephanie works as a crop insurance adjuster and helps out on the farm when she can. They take their children, William, 5 and Elizabeth, seven months, along for the ride while farming when possible.

“Someday we hope to have our children working alongside us,” Matt Symns said. “Our dream is to pass on highly maintained farm ground.”

Besides protecting soil and water, conservation meshes with two other Symns values. As he says, “We try to save costs or increase efficiencies in everything we do.”

The NRCS Conservation Stewardship Program helped Symns start using variable-rate application of chemicals on his row crops. “Variable-rate  application puts nutrients where they are needed the most and doesn’t waste them on acres that may not need as much,” Symns said. He works with an agronomist to determine rates. Since he hasn’t invested in the equipment needed, he hires a contractor to apply the fertilizer.

“Chemical application has evolved, and we use new chemistries to manage herbicide tolerance in weeds,” Symns said. “While low-drift nozzles increase droplet size and keep applications on target, recently we started to use finer droplet sizes to get better coverage while still targeting applications. A set of nozzles is fairly inexpensive, so we try to keep the tools available for the right job.” 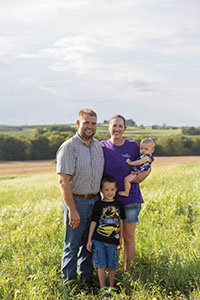 Terracing and tiling are trending here

No-till and terracing have been common practices in northeastern Kansas for years now. Variable-rate applications came later, and now cover crops are being adopted.

Local farmers started installing tile outlet terraces, both conventional and grass, in the 1970s. The Symnses are replacing old tiles as they fail with improved modern-day material. “Tile outlets increase tillable acres and eliminate the need for grassed waterways that present maintenance challenges of their own,” Symns reported.

Participating in NRCS cost-share funding, Symns installed grassed terraces. “Conventional broad-based terraces don’t work as well on our 10- to 20-percent slopes,” he explained. “This kind of conservation work is expensive, and this is where we benefit the most from cost-share programs.”

The family’s first cover crops hit the ground in 2012. “They have been an absolute priority, following terrace building and repair, ever since,” Symns said. “After bulldozers scrape away the dirt to build terraces, cover crops help replace residue and organic matter, drastically decreasing erosion of the exposed soil.” He’s experimenting with cover crops on other acreage to assess additional benefits including increased water infiltration and weed suppression. 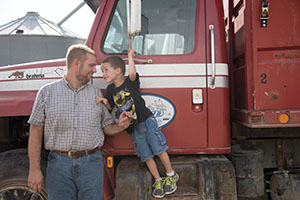 As part of CSP, the Symnses worked with an NRCS grazing specialist to implement rotational grazing for their cattle where water sources and connecting pastures allow. This year, they will try grazing cattle on stockpiled forage to reduce hay needed for winter feed.

The Symnses use prescribed burns on underused grazing land to reduce invasive species such as trees, and to help warm the soil for early growth. They also use prescribed burns on NRCS Conservation Reserve Program acres. The family owns about 20 acres enrolled in CRP, and manages another 75 CRP acres for landlords. “We reduced CRP acres where it’s more profitable to return it to tillable acres,” Symns said. “We left smaller and less accessible fields in the CRP.”

Deer have plagued the Symns farm for years. “CSP provides financial incentives to leave deer-damaged acres around the outside of fields unharvested, which increases habitats and food for upland game birds,” Symns said. “It seems to be working.”

Learn conservation from an award-winner

Reichert and his wife, Julie, farm with their grown son, Justin, who represents the sixth generation of his family on the farm. “When I was a kid, Dad would say, ‘We’ve got lots of clods out there—we’d better get out there and break it up,’” said Kenny Reichert. “I got tired of plowing and disking! I want to save some of our soil for the future.”

Reichert started no-till practices 30 years ago, but no-till alone wasn’t working the way he wanted. In 2011, he began planting cover crops. Cereal rye is his mainstay, but he’s tried things like radishes, sorghum, millet, cowpeas and mung beans as well.
“No-till and cover crops go together,” said Reichert, who farms 800 of his own acres and custom farms another 400 for others. “I see more and more farmers adopting these practices.” Here’s what he sees as the benefits: 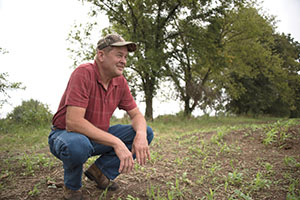 Leading the way on his own dime

For starters, incentives weren’t in place when Reichert adopted no-till methods. He began terracing to protect the local watershed in 1985 and received cost-sharing for that for a while. But terracing requires heavy equipment, which gets expensive even with financial help. He installed drainage tiling on some of his land and sees more tiling coming to his area. He also grew cover crops before incentives came along.

Even without incentives, conservation has been worth it for Reichert, and he continues to reap rewards.

Building the case for cover crops

“I have never seen as much excitement as there is now with cover crops,” Reichert said in an NRCS news release issued when he won the Olin Sims award. “We’re revisiting the days of my grandfather. Farmers were using cover crops without knowing the science behind why they worked. Now we have the technology and research to back up why they make such good sense.”

When Reichert first tried cover crops, he had to take a road trip to Ohio to find the seed. A few other farmers went in on the purchase. “Now the seed’s easy to find,” Reichert said, “Back then, we had no idea what we were doing.”

Topsoil tends to be shallow on Reichert’s fields, but he makes the best of what he’s got. “After I began using no-till, I saw organic matter in the soil grow to about 3 percent, which was an improvement,” Reichert said. “After planting cover crops for a few years, I’m seeing 4 to 4.2 percent organic matter, so I know I’m improving soil health.”

The more years you plant a cover crop, the easier it is to plant, he said—the soil develops a looser texture, and doesn’t seal up on the surface as much.

“Cover crops are teaching us to look at soil in a more holistic way,” Reichert said. “We’re moving away from a generic approach with fertilizer, and looking at what works best for each soil type.” That’s where variable-rate fertilizer application comes in, which can reduce fertilizer use and costs.

Reichert watches for soil texture and color, and when he sees earthworms, he knows the soil is happy. “Happy soil produces better crops and higher yields,” he said. He’s learned a lot but continues to work with NRCS, agronomists and other experts to analyze soil needs.

“Cover crops extend our grazing season and let us keep the cows off our pasture longer, allowing it to recover,” Reichert said. He’d like to use rotational grazing techniques to preserve pasture further, but they don’t work on his farm because it’s divided up by some roads.

Showing other farmers how it works 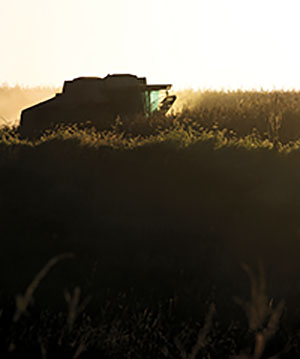 Under Reichert’s leadership, the Chariton County Soil and Water Conservation District worked with the Missouri Department of Natural Resources to develop a pilot project to test cover crops. The program helped alleviate fears of his fellow farmers who were concerned with the costs and effectiveness of changing their practices. “The program went statewide last year, and we’re pretty proud of that,” Reichert said. A Missouri state sales tax dedicated to conservation funds the program.

Reichert also helped bring a University of Missouri conservation demonstration farm to Salisbury, in Chariton County about 25 miles from his farm. Associated Electric Cooperative owns and contributes use of the ground where the farm is located, near an Associated power plant.

So far, conservation programs have been voluntary across the U.S., and Reichert would like to keep it that way. “If farmers don’t take the lead on conservation on a voluntary basis, I’m afraid someone will start telling us what to do.” He cites a case near Des Moines, where a lawsuit is brewing over watershed damage.

As for the future, “We’ll continue to make conservation advances,” Reichert said. “Just when you think you’ve got it figured out, the soil tells you something different. There’s always something new coming down the road.”

“Agriculture has come under greater scrutiny over the past few years due to hypoxia in the Gulf of Mexico created by agricultural runoff, and due to the costs of treating water from drinking water supply reservoirs,” Gelnar said. “Limiting runoff of nutrients and sediment is a primary concern.”

More than 50,000 acres of Missouri grassland were converted to row crops in recent years, he said. “Fertilizer consumption in the state increased and nutrient and sediment loss increased in some areas.”

However, he added, significant progress is being made in addressing water quality through the efforts of farmers, USDA, and soil and water conservation districts in conjunction with the Missouri Department of Natural Resources’ Soil and Water Conservation Program. Terraces have helped keep sediment out of streams and lakes, and most farmers are managing fertilizer application more efficiently, which limits the loss of nutrients to streams and lakes.

The agency’s second priority is soil quality. “Intensive use of cropland has significantly impacted the health of Missouri soils,” Gelnar said. “Over the years, intensive tillage, harvesting and erosion have degraded our soils to the point where production may be less sustainable. Organic matter has deteriorated significantly, and it’s affecting the soil’s capacity to absorb and retain nutrients and water.”

Fortunately, farmers are doing something about it. “The soil health movement is one of the most significant conservation efforts in decades,” Gelnar said. “Many farmers are planting cover crops, and federal, state and local agencies have provided extensive resources.”

As for forestland, Gelnar reported that Missouri suffers from overstocked stands of hardwoods, as well as erosion caused by logging. Also, wildlife habitat has been adversely affected by row-crop production and intensive grazing of cool season pastures. The state has made significant strides in restoring and establishing wildlife habitat, especially for grassland birds and waterfowl.

Gelnar expects NRCS to focus more on climate issues in the future. “In Missouri, we are experiencing more occurrences of prolonged drought and intense rainfall,” he said. “The result is reduced water infiltration into the soil, and greater surface water runoff.”