Written by Nancy Jorgensen on September 02 2016. 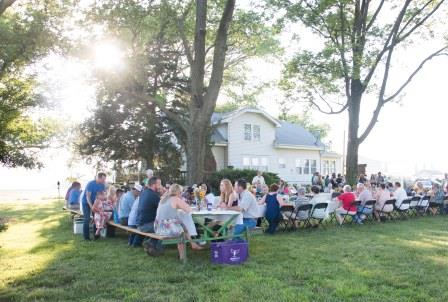 Kate Lambert and Laura Handke are working to engage consumers in conversations about the safety of genetically modified organisms. In agriculture’s case, GMOs include crops where the DNA has been modified using genetic engineering. Kate and Laura explain that hundreds of studies show that GM foods are safe, but many consumers remain unconvinced.

“We grow and feed GM crops because they lower our chemical inputs, and they lower our carbon footprint,” says Kate Lambert, who raises corn, soybeans and cattle with her husband Matt near LaClede, Mo. “GM crops make us more sustainable, our feed more affordable, and make our farms and our soil healthier. That’s the science, even if it’s not the popular internet myth.”

Laura operates a small beef farm near Atchison, Kan., with her husband, Chris. They feed GM products to their cattle. As Laura points out, “Greater than 90 percent of today’s corn and soybean supply in the U.S. is GM.”

Kate and Laura both work to reach consumers through Common Ground (www.findourcommonground.com), an organization developed by farmers through checkoff funds gathered by the United Soybean Board and the National Corn Growers Association.

Kate and Laura sometimes face an uphill battle convincing consumers about GMO food safety. But they and others in agriculture are learning how to communicate more effectively. The first step: facing reality about GMOs and public perception.

Many consumers stick with their first impression

A 2013 Internet survey of 961 people across the U.S. conducted by Brandon McFadden of the University of Florida confirms that even when given new information about GMOs, many people won’t change their minds. After they read scientific data stating that GM foods are safe, 12 percent of study participants said they felt such foods were less safe—not more—which astonished McFadden, an assistant professor of food and resource economics.

“Possibly, the best indicator for whether a person will adopt scientific information is simply what a person believes before receiving the information,” McFadden said. “First impressions matter.”

Farm moms may be more convincing

Kate and Matt Lambert are raising two boys, Mace, 4 and Meyer, 1. Laura and Chris Handke have a daughter, Audrey Ann, age 4. Common Ground recruited Laura, Kate and other women with the idea that farm moms who feed their children GM foods might be more credible with consumers.

Laura graduated with a master’s in agricultural science in 2014 and now works for a Missouri Farmers Care program, Ag Education on the Move. Kate is a loan officer with FCS Financial and writes a blog on farming issues at uptowngirlblog.com, and also tells her story through Facebook.

“My family eats beef that’s finished with GM grain, as do most Americans who consume beef,” Laura said, adding that the World Health Organization, American Medical Association, USDA and the Food and Drug Administration all deem GM crops and livestock fed GM crops safe to consume.

But both women find that presenting scientific facts is not an effective way to start a conversation.

Most people don’t care about the science

Since Kate didn’t grow up on a farm and didn’t care much about science, she brings a different perspective to Common Ground.

“When I met my husband and moved to a production farm, I knew I needed to understand it better,” Kate said. “Like every other mom, I wanted to know if this stuff we were growing and using on our crops and animals really was safe. Once I took the time to understand the science, it was obvious that GM foods are safe and necessary.”

However, Charlie Arnot, CEO of the Center for Food Integrity, says his organization’s research shows that the science behind GMOs doesn’t matter to most people.

“Agriculture has used the science argument, but when faced with a controversial topic, most people focus more on the values and beliefs of their support groups,” he said. CFI, based in Gladstone, Missouri, is a nonprofit supported by food manufacturers, farm organizations and other groups.

Arnot cites research by Dan Kahan, who studies cultural cognition at Yale. He identifies various support groups as “tribes.” “Beyond safety, Kahan says you need to offer consumers something in the best interest of the tribes they align with,” Arnot said.

You can’t convince the anti-GMO crowd

When Laura runs into a member of the anti-GMO tribe, she likes to ask, “Is there anything that would change your mind about GMOs?” When they say no, she doesn’t bother trying to convince them. “They’ve made a choice, and that’s their right,” Kate said, adding that no one wins the argument. “Those who ignore science and follow the warnings and misinformation of bloggers and daytime television cannot be won back through science and conversation.”

Common Ground teaches participants to focus on the “movable middle.” “Most people don’t have an opinion on GMOs,” Kate said. “All we can do is tell our story. Farmers are busy—they don’t realize they need to tell their story. Social media is helping to close that gap. But we have to be open and honest and real.”

When you run into people who are on the fence about GMOs, “These are the people you can have a conversation with,” Laura said. She confirmed this while meeting with consumers at libraries last summer as part of the Missouri Farmers Care program’s Ag Education on the Move in Kansas City.

How to approach those on the fence

Arnot suggests three steps for approaching someone who expresses an interest in GMOs. “How you engage them is crucial,” he said.

When they’re ready to hear benefits

Alison Van Eenennaam, a Ph.D. in animal genetics and biotechnology at the University of California-Davis, hears many incorrect statements about animals and GMOs. These include the idea that current livestock are genetically engineered (they are not), and that animals are becoming sick from eating GMO feed (they are not). She explained that in animal agriculture more than 100 billion animals have consumed predominantly GMO feed for almost 20 years, and there have been no observed deleterious health effects or negative production trends.

What would be the consequence of banning the current generation of GMOs? “There would be more insecticides sprayed if there were no more Bt crops [GM crops with herbicide resistance], and more toxic and persistent herbicides would be used in the place of glyphosate if RoundUp-ready crops were banned,” she explained. “These are documented benefits. That’s why 18 million farmers have adopted these crops, including 16.5 million in developing countries,” she added.

Still, Van Eenennaam suggests you initiate the conversation in the right place at the right time. “I don’t bring up GMOs at a cocktail party, do you?” she asked. “There is a spiral of science around these controversial scientific topics in polite society. But that does not diminish the importance of this topic, and the need to have an honest discussion about the pros and cons of this breeding method.”

While most scientists agree that GMO crops are vital to feeding a growing world population, CFI says that argument doesn’t hold water with most U.S. consumers.

“Our research shows that the most impactful thing we can do to build trust in our food is to be transparent,” Arnot said. That’s why CFI supports the Grocery Manufacturer’s Association SmartLabel program initiated this year. Through the program, consumes can use smartphones to snap a QR code and learn more about the food they’re considering purchasing, including whether it includes GMOs.

“GMOs are the hot topic today, but tomorrow it may be labor, animal care or carbon issues,” Arnot said.

Arnot believes that farmers can influence public opinion—at least with those people who are concerned but not dogmatic about GMOs and other issues. “People like farmers,” he said. “One convincing argument is that our technology has changed, but our values have not.”

Farmer spokespersons like Kate and Laura want to do all they can to reach people who haven’t already formed opinions, from farm tours to educating youth.

“I want consumers to make informed decisions not based on fear,” Kate said. “I want them to talk to a real farmer. That is our role as an industry—to make ourselves available.