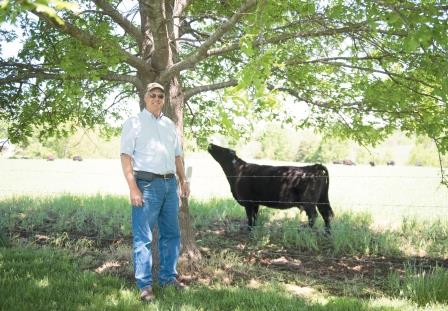 Rick Aufdenberg grows corn, soybeans, wheat and cattle near Jackson, Mo., and works full time at the local Case-IH dealership. He leads a busy life but found time this spring to become certified through Missouri’s Agricultural Stewardship Assurance Program (ASAP), which verifies that he is a responsible steward of the land and environment, and he provides safe food for consumers.

“It shows that we’re doing the right things on the farm,” Aufdenberg said of the program, offered free to farmers and coordinated by the Missouri Department of Agriculture. “One of ASAP’s goals is to provide marketing opportunities by showing that we grow quality products,” Aufdenberg added.

Rick’s wife Renee found the www.asap.farm website, and Rick completed certification forms online in just a few minutes. “Most of the questions covered things we were already doing on the farm for a long time, like growing cover crops and using rotational grazing,” he said.

You can seek certification in six areas: farmstead, cropland, energy, livestock, grassland and forestry. To apply, complete one-to-two-page forms in each area that you’re interested in. For example, the farmstead form includes questions about pesticide and fertilizer storage. The cropland form includes questions about crop rotations and using GPS technology. The livestock form covers antibiotics use and waste management.

About a month after Aufdenberg submitted his applications, the ag department’s ASAP expert John Knudson visited the farm to conduct an audit. Audits take anywhere from one to three hours. At the end of the day, Knudson presented the Aufdenbergs with a sign for the farm’s driveway. As the sign points out, the Aufdenbergs are certified as good stewards in four areas— the farmstead, cropland, livestock and grasslands.

Two of the Aufdenbergs’ sons, Brent and Todd, are involved in the farm, and a third, Cory, helps during busy times. All three work off the farm. Renee handles the farm’s bookkeeping and operates a day care at home—including caring for her grandchildren.

When we talked in April, Rick was gathering PVC piping and other materials to erect the sign. “We want it up in time for Cory’s wedding reception at the farm in a few weeks,” Aufdenberg said. “We also host a lot of agricultural students and farm groups, and look forward to visitors seeing the sign when they arrive.”

Richard Fordyce is director of the Missouri Department of Agriculture in Jefferson City. He and his wife Renee also grow soybeans, corn and cattle near Bethany. Their farm recently earned ASAP certifications in grassland, cropland, energy, farmstead and livestock. Producers can also seek a forestry certification.

Fordyce got the idea for ASAP while attending a 2014 meeting in Michigan, which requires all farms to become certified as sustainable.

“When I got home, I decided we need to champion the good things agriculture is doing here in Missouri,” he said. “We also hope to start conversations with those outside our industry, including consumers. Finally, we believe the sustainable certification will aid producers in their marketing efforts.” 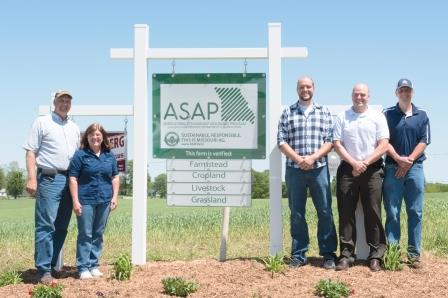 “Since we started our program at the State Fair in August 2015, we have fielded calls from five or six other states,” Fordyce said. “We’ve become a leader among states with voluntary programs.”

As of April 2016, hundreds of farmers had contacted the department with questions about the program, and 50 farms had been certified.

“When more signs start popping up, it will generate a lot of conversation,” Fordyce predicted. “Consumers want to know more about where their food comes from. Once we get more people in ASAP, we’ll have the numbers we need to send a message to consumers and policymakers about how Missouri farms embrace sustainability.”

For example, Fordyce wants the public to understand how biotechnology allows agriculture to use fewer chemical inputs and save soil through minimum tillage practices. And how precision agriculture furthers sustainability by targeting chemical and fertilizer applications in the right amount to the right place at the right time.

Look for the ASAP program to evolve. “Agriculture is changing rapidly, and we can’t remain static,” Fordyce said. Once 100 to 200 farmers are certified, the department plans to invite them to a summit on sustainability innovations.