From the minute a crop leaves the field, the grain business becomes logistics. For MFA that means being able to receive grain, store it, and deliver it to the most profitable markets in a timely manner. As part of a long-term strategy, MFA Incorporated is stepping up these logistical and delivery capabilities in northwest Missouri by building a shuttle-loader facility.

Through a joint venture with MFA Oil Company, MFA will construct the shuttle loader on the Union Pacific Railroad approximately 5 miles east of Hamilton, Mo. The grain-handling facility will have 2 million bushels of permanent storage capacity in concrete structures plus 1.5 million bushels of temporary storage. The facility’s loop rail siding will accommodate a 110-railroad-car “shuttle” unit.

“When the project is completed, this facility will give farmers in the region—stretching from north central Missouri into southern Iowa—a new option for grain delivery. The high-speed pits and conveyors will handle grain as fast as it will come out of a truck. And because we can put unit trains directly onto the Union Pacific, we will gain access to new markets and new end-users,” said Mitch Dawson, Director of Grain Operations at MFA Incorporated.

Shuttle-loader facilities, sometimes called “loop-loaders,” provide rail siding in the shape of a loop connected to the main rail line. Railroad operators favor these kinds of facilities because of the inherent efficiencies of loading all the cars of a train with the same commodity at one facility and delivering them all to the end point. Such trains, called unit trains, are commonly seen rolling through the Midwest full of coal or grain. It’s a system that has evolved over the years as railroads fine tuned freight logistics and fees.

“Logistics are a key issue in the grain business,” said Dawson. “For MFA, this is the culmination of a multi-year process during which we evaluated the needs of our grain system. We identified this facility as a strategic improvement that will help us provide needed service to our owners and customers in a large part of our northern trade territory.”

Situated on Highway 36 in Caldwell County, Mo., the shuttle-loader facility will take advantage of an improved four-lane highway, proximity to north-south traffic on Interstate 35 and direct access to the Union Pacific Railroad.

Adam McIntyre, regional manager for MFA locations in the area, sees the shuttle loader as a year-round asset for a productive part of the Midwest. “There is a lot of grain produced in north central and northwest Missouri, and harvest is a critical time for farmers. As a place to quickly unload during peak harvest, MFA’s investment in the shuttle loader will directly benefit farmers, but it also helps relieve harvest-time pressure on MFA grain receiving facilities throughout the region. During the high volume of harvest, we can move grain from smaller elevators to the shuttle loader to keep local storage capacity available.”

McIntyre added that the facility will be an asset in the sense that the shuttle loader adds value to farms throughout the year as an additional marketing option for their grain.

“Farmers favor facilities like this one because of the efficiency of large-capacity grain pits and high-speed conveyors to move the grain into storage,” said Dawson. The facility is capable of moving 60,000 bushels per hour as farmers deliver grain. That means farmers will be able to unload as quickly as their trucks allow. The facility will also receive grain from some 21 smaller MFA grain elevators in the region, making those locations more efficient delivery points for local farmers.

Aside from helping remove bottlenecks in grain delivery at harvest time, the shuttle-loader facility will help MFA efficiently sell grain to distant end-user markets—with the potential to positively affect average local basis in the region.

A 110-car shuttle will hold approximately 420,000 bushels of corn or 380,000 bushels of soybeans. “We anticipate the ability to load 15 to 16 million bushels—about 40 shuttle trains—per year,” said Dawson. “Much of the grain will be sold to poultry markets in northwest Arkansas, eastern Oklahoma and eastern Texas. Some new markets we can reach include terminal markets in Arizona, California and Mexico. The facility will also provide MFA an efficient means to deliver northwest Missouri and southwest Iowa grain to terminal markets in U.S. Gulf region.”

The joint venture between MFA Incorporated and MFA Oil Company brings resources and expertise from both cooperatives and a significant investment in local communities. The facility will be operated by MFA Incorporated and is expected bring five full-time jobs as well as seasonal part-time jobs to the region.

“This is a unique opportunity to aid local farmers by improving the transportation infrastructure in northwest Missouri,” said Mark Fenner, President and CEO of MFA Oil. “We’re always looking for ways to support our existing customers and attract new ones and this joint venture with MFA Incorporated will help us do both.”

“The shuttle loader helps fulfill our mission,” said Ernie Verslues, President and CEO of MFA Incorporated. “MFA was formed more than 100 years ago to address lack of buying power and market access for farmers. We still take that mission seriously. This facility fits MFA’s vision to grow in strategic, profitable ways that enhance the economic well-being of our member owners,” he said. 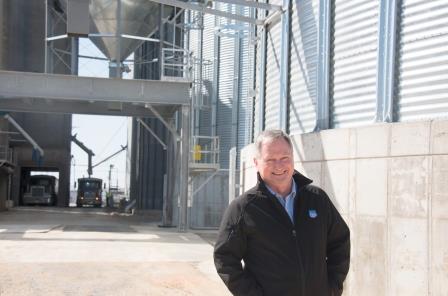 MFA director of grain operations Mitch Dawson is a veteran in the grain trade and part of the team that helped site MFA’s shuttle-loader facility. Dawson was recently elected as chair of the National Grain and Feed Association’s Country Elevator Committee. The 32-member committee represents country elevators in NGFA’s work to develop public policy. He was also elected to a three-year term on the NGFA board.

In his 36-year career, Dawson has lived in seven states and bought, sold and traded countless tons of grain and feed ingredients. His experience includes stints at a multinational agricultural firm, a major export venture in New York City, a commercial feed plant, a major livestock integrator and cooperatives. From getting soybeans across the globe to a consultation on building an ethanol plant, Dawson’s experience has earned him a great deal of knowledge in the grain industry.

“Two of the things that we’re working through now are domestic trade rules and how biotechnology traits in grain can affect how elevators and feed mills handle grain deliveries,” said Dawson. While NGFA supports biotechnology, its membership advocates for deep market acceptance of traits before moving into the marketing chain.

Dawson’s breadth of work in the grain industry was a benefit when MFA began to research building the 110-car grain shuttle facility near Hamilton on the Union Pacific railroad.

“Siting a facility like this requires a careful look at the marketplace and geography of grain production. This facility will benefit an area that is underserved by rail service for grain transportation,” said Dawson.

“At present,” said Dawson, “we are limited on rail availability due to cost structure and cost of freight. The new facility will put us in a position to be in the origin-supply and destination-demand business. That’s exciting because it puts MFA in a marketplace we haven’t been able to impact.”

Over the next year, as the shuttle loader is being built, MFA’s grain merchandising staff will work to expand relationships with current customers who have Union Pacific grain buying needs. “In addition, we intend to explore opportunities to develop new rail customers whom we haven’t had the opportunity to serve,” said Dawson.