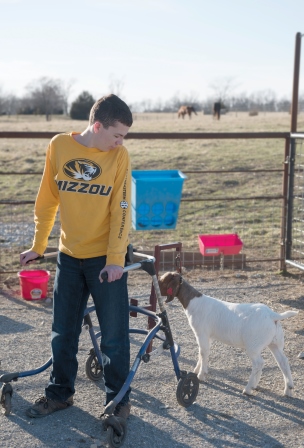 Riley Tade is just 17, but he has a stack of ribbons to show for his work in 4-H livestock projects. Even though cerebral palsy renders him unable to stand independently, he still goes into the ring. A friend ties his Boer goats behind his walker when Riley shows them. His parents work in town and raise goats and horses on a small farm near Ashland, Mo.

Another 17-year-old 4-Her, Corbin Bell’s resume runs as long as some presidential candidates’. He shows steers at 4-H events with enviable success, selecting the best prospects from his family’s cattle operation near Higginsville, Mo.

Riley and Corbin are two of the nation’s 6.3 million 4-H participants. 4-H, which claims to be the nation’s largest youth organization, was formed through cooperative Extension programs and land grant universities more than 100 years ago to teach rural youth agricultural skills. Today the program embraces urban kids, too. Across the globe, young people participate in everything from rocketry to nutrition.

But Riley and Corbin prove that farm kids continue to benefit.

For Riley, goats are the right fit

Riley Tade’s story is as impressive as any 4-H competitor, especially when you consider the obstacles he’s overcome in his five years in Boone County 4-H. Riley doesn’t talk much, so we heard his story from his parents, Jennifer and Steve Tade.

For Riley, handling a steer would be daunting, but Boer goats are just the right size. The breed, raised for meat across the globe, has become popular in 4-H over the past 25 years. “They’re smaller than cattle and sheep,” Steve Tade explained. In addition, the gestation period for a cow is nine months, and most cows drop one calf each time while goats gestate for five months and usually produce twins.

When we spoke to Steve in February, the family was selecting the baby goats Riley will show at the county fair in late July.

Riley has a buck and 14 does, and he raises approximately 25 kids a year,” Steve said. “We do not eat the goats—we sell them, mainly to local 4-Hers.” Riley specializes in wether-producing does. Also, Riley sold two wethers at a consignment sale this spring.

Riley takes the money he earns from goat sales and reinvests in his herd. “We are always improving genetics,” Steve said. “We have invested in artificial insemination on some does, and tried embryo transfers. Riley needs his goats to be gentle, and he starts working on them at a young age to tame them.” Goats can be difficult to contain. “We have electric fence, which is key,” Steve said.

Every day, Riley spends at least an hour after school feeding and caring for the goats. The time lengthens as the fair approaches. “A lot of things are a challenge for Riley, but he wants to do as much himself as he can,” Steve said.

The University of Missouri Extension recently interviewed Riley for a story about the growing number of 4-H members with special needs. The article explained how Riley moves through the barn on a rolling stool, scoops feed, scrubs water buckets and trains baby goats to lead before they’re weaned. “I’m tough as nails,” Riley told the interviewer.

Riley is the Tades’ only child. Steve, who sells insurance and Jennifer, a corporate insurance trainer, are dedicated to Riley’s goat project. Steve designed and fabricated a hook for Riley’s walker that allows Riley to lead the goats. The family border collie, Myrty, moves the goats through an exercise pen to build their muscles.

Creighton Sapp, a former member of Riley’s 4-H club, has helped out at shows by attaching Riley’s goats to his walker, even when he was competing with Riley. He takes them off the lead and sets them up for the judge to feel their muscles.

“Riley always has a positive attitude and has fun,” Steve said. During the county fair, which runs Monday through Saturday, Riley stays in the family trailer’s living quarters at the fairgrounds. “He hangs out in the barn, plays cards with his friends, has water fights, that type of thing,” Steve said. “We make him go home for a few hours once in a while to take a nap and chill.”

Last October, Riley showed his goats at the American Royal Livestock Show in Kansas City. “The quality of animals ran deep; it was the toughest show Riley has participated in,” Jennifer said. “He placed fifth in one class.” The family also took Riley to Denver’s National Western Stock Show goat event in January. “Riley has his sights set on Denver for 2017.”

Besides showing goats, Riley cures country hams that he enters in the county fair. In 2015, his ham qualified for the state fair.

“We love 4-H because of the amazing people we have met,” Jennifer said. “Riley looks forward every month to the meetings. He enjoys visiting with friends about his projects.”

After high school, Riley plans to stay on the farm. He also dreams of becoming an auctioneer. He records his favorite auctioneers on TV and treks to the local sale barn the first Thursday of each month. Every Monday night, he practices his auctioneering skills at home. 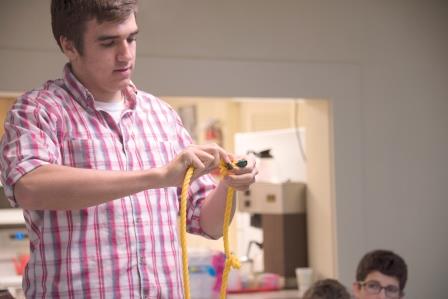 Corbin showed hogs for six years, raising three grand champions at the Lafayette County Fair and taking a market hog title at the State Fair. In 2012, he switched to steers, and in 2014 won the county grand champion carcass competition.

“There’s a bigger payoff for beef than hogs,” Corbin explained. “We eat the beef I raise and sell some to family members and locals. It helps pay for my gas.”

The secret to his success? “Quality,” Corbin said. “All my steers are finished and conditioned in our family feedlot. We steadily improve by upgrading our bulls and through artificial insemination.”

Corbin’s dad, Steve Bell, farms full-time with his father, Robert. They raise 150 Angus-cross cow/calf pairs and grow soybeans, corn, wheat, hay and pasture. Steve serves on the county fair board. Corbin’s mom Kim, a special education teacher, has been a 4-H volunteer leader for 20 years and runs the concession stand at the county fair. Corbin’s sister Ashley, who works at the University of Kansas Hospital as the Lead Cancer Registrar, also led clubs and projects.

It takes more than family support and quality animals to create a champion, and Corbin is self-driven. “For two months before the county fair, I spend one to two hours each night halter-breaking my steers,” Corbin said. Along the way, he selects the two best steers to show—last year he named them Ben and Jerry. By show time, each weighs about 1,300 pounds, which can be a handful. Mason helps by trimming the steers’ heads, and Corbin washes the animals every other day three weeks before the fair, and every day the week prior.

“No one knows how much effort goes on,” Corbin said. “Hard work pays off.”

It’s not easy to catch Corbin. He takes part in everything from varsity basketball and track to church, choir and the National Honor Society.

Ina Linville, director of Missouri 4-H, reports that the most active ages for 4-H participants run from kindergarten through eighth grade. While she didn’t spell out the reason, the numbers likely tend to fall off in high school as interest turns to other activities. For farm kids, that includes FFA. Corbin is treasurer of his local FFA chapter.

Still, Corbin has stuck with 4-H for 10 years. He participated in projects including livestock judging, forage and grains, public speaking and photography. In 2014, he was crowned Lafayette County 4-H King. He’s past president of the Lafayette County 4-H Council, and those leadership skills took him on an expense-paid trip to the National 4-H Congress in Atlanta last year. This year, he was one of six 4-Hers earning the Missouri Key Award, was named a representative for the Northwest 4-H Region in Missouri, and recently attended the 4-H legislative academy. Next, he hopes to become a state officer.

“Participating in 4-H hasn’t been an option for me,” Corbin said. “My great aunt and great grandmother started our Hazel Dell 4-H Club in 1950. My whole family’s heavily involved, and the roots run deep.” Nationally, 4-H has more than 3,000 volunteer leaders.

Corbin also credits his local Extension 4-H coordinator, Kathy Bondy, now retired, for pushing him to fill out applications and “strive for greatness.” Linville gives county Extension employees a lot of credit. “They are the face of 4-H at the local level,” she said.

For the future, Corbin plans to earn his master’s degree and become an accountant, eventually working in agricultural finance.

Corbin’s family purchases feed and minerals at MFA Agri Services in Higginsville. MFA regularly purchases animals at the county fair from Corbin and other contenders and supports 4-H in other ways.

4-H struggles to change and grow

Across MFA country, almost every county has at least one 4-H Club supported by a small army of volunteers, Extension employees, local sponsors and alumni donors.

“One of every five Missourians between the ages of five and 18 participates in 4-H,” says Ina Linville, state director of 4-H at the University of Missouri. Her organization recently conducted a survey showing that 21 percent of all 4-Hers live on a farm and 41 percent live in a town of fewer than 10,000 people. The rest live in suburban or urban areas.

Linville appreciates how MFA supports 4-H through sponsorships and other contributions. “MFA and its Agri Services locations also buy a lot of animals at fairs,” she said, which helps defer expenses that 4-H kids bear when raising animals. “MFA also supports robotics, and it’s exploding.”

Besides private funds, 4-H charges program participant fees, seeks grants and obtains funds from the government. However, Linville reported that state and federal support for 4-H has been flat for 10 to 15 years, and took a hit as many Extension programs froze hiring and cut budgets. National 4-H Council total liabilities and assets declined from $39 million in 2013 to $34 million in 2014—the last years figures were available on www.4-H.org.

In Missouri and Kansas, things are looking up. Missouri added more faculty and staff in the last two years. “We’re looking to grow in 2016,” Linville said. 4-H plans to expand in-school programs on timely topics such as DNA and biotech.

“Agriculture is becoming more technical,” Linville said. “We’re preparing kids for the 21st-century workforce.” For example, 4-H offers programs on goal-setting and problem-solving. 4-H members are two times as likely to go on to higher education and three times as likely to enter science fields, she added.