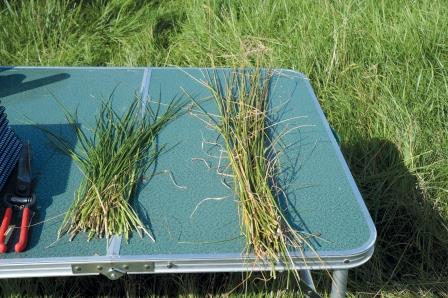 Summer fescue pastures can be a problem for cattle producers. When the plant matures, it stops growing leafy foliage and sends its energy to stems and seedheads. Nutritional values decrease and toxins in the seedhead can negatively impact cattle health. Suppressing seedheads reduces toxins and improves forage quality, allowing for an extended grazing season.

Last summer, Dow AgroSciences introduced technology to suppress fescue seedheads using Chaparral herbicide. Huntsville, Mo., cattleman and director of MFA’s Health Track program, Mike John partnered with Dow to conduct a field study on his ranch. John sprayed a 10-acre strip of pasture with two ounces of Chaparral while fescue was in the boot stage. The boot stage occurs in early spring when the plant produces a flag leaf. An adequate number of leaves are present to provide plenty of surface area for the herbicide. Application timing is crucial. Spraying too early can damage the fescue. Spraying too late can reduce effectiveness of the herbicide.

John said seedhead suppression and weed control was more than evident in his field study. “Not only did the treatment control weeds and seedheads, but other cool-season grasses showed up,” John said.

For producers who harvest fescue seed, this technology can diversify the operation. Mettler said producers can use Chaparral on fescue pastures that are too rough or too difficult to access with a combine. John said producers need to evaluate the economics of each method to determine the best approach.

Using Chaparral to treat fescue pastures isn’t the right approach for every operation. It requires precise mixing, timely application and the ability to rotate cattle for deferred grazing.

There are no grazing restrictions when using Chaparral. However, in preparation for treatment, Mettler said producers should consider grazing their cattle early in the spring before rotating to a different pasture during spraying. Cattle can return to the treated pastures a month later for summer grazing. Spraying Chaparral will stress fescue plants for about two weeks, causing a yellow tinge in the foliage temporarily. Moving cattle to other pastures helps to not overstress the fescue and allows it to grow back in time for summer grazing. Chaparral will kill legumes, but producers will see more grass species appear in the pastures. Mettler said growing conditions will dictate if spraying is appropriate. In drought years, spraying might hurt forage production due to extra stress.