Rules and tools advance toward on-farm UAV use 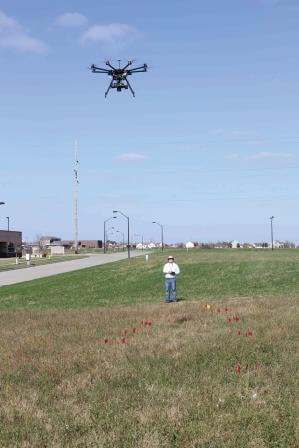 In June 2014, the FAA, which regulates aviation safety in the U.S., adopted rules that effectively prevent anyone from using UAVs to make decisions on the farm. In January 2015, ADAVSO received the FAA’s first exemption to fly UAVs for agriculture.

Robert Blair, a farmer from Kendrick, Idaho, partnered with ADAVSO and Empire Airlines to form Empire Unmanned, which will soon offer UAV agricultural scouting services under the FAA exemption.

“It’s not as easy as people think to fly UAVs for agriculture,” says Blair, who raises wheat, barley, peas, lentils, garbanzos, alfalfa and cows on 1,500 acres. “There’s still a lot of work to be done by agriculture, aviation and the FAA. With this exemption, we’re working to show the safety and viability of UAVs in our industry.”

Today agronomists and farmers generally scout fields on the ground for signs of pests, disease and moisture issues. Blair believes UAVs represent the next step in precision agriculture.

Using a UAV with a special camera that takes pictures every few seconds covers more ground and results in much more data than scouting on the ground. Each photo is tagged with GPS coordinates. You use special software to put the photos in a usable format. Then, it takes a trained person like an agronomist to analyze the results and help the farmer make corrective decisions. For example, you can plug the data into precision software already installed in your tractor or sprayer to increase or decrease chemicals in specific points in a field.

You can fly as a hobby, but not for your business

The new FAA rules are a big deal to farmers who already own a UAV. “The FAA’s June rules clearly state that you can fly a hobby UAV over your fields, but you can’t use it to make business decisions,” Blair explained. “Of 11 exemptions granted for commercial use of UAVs, ours is the only one in agriculture.” The FAA granted other exemptions in industries including oil and gas, real estate and movie production.

Other nations already allow farmers to use UAVs to make business decisions. “This exemption will help move us in the direction of competing with other countries,” Blair said. But, he added, the FAA has reasons for moving slowly in the U.S. “We have more private pilots, heavier air traffic and more security concerns.” If every commercial farmer in the U.S. owned a drone, there’s no way FAA could assure safe skies, he added.

“We’re still in the infant stages of figuring out how to make this work, but we are moving forward,” Blair said. He figures his company’s experiences will help FAA understand what agriculture needs and to adopt rules that work safely for our industry.

According to Blair, he was the first farmer in the U.S. to own and fly a UAV. He made a name in the UAV arena in part through his blog, www.theunmannedfarmer.blogspot.com. He’s flown since 2006 without any safety incidents, but stopped when he heard about the June FAA ruling.

Blair filed for an exemption from FAA in 2008, unsuccessfully. This time, his partnership succeeded. Empire Unmanned is applying for FAA permits to cover certain geographic areas with a 1.5-pound, fixed-wing Sensefly eBee.

The June FAA rules defined commercial versus hobby use. Even with the exemption, Empire Unmanned must follow FAA rules.

No one knows how many U.S. farmers and agribusinesses already fly UAVs above their fields. Blair suspects that many may be unaware of the new tougher FAA rules. He advises caution.

“You might face fines and cease-and-desist letters if you don’t follow regulations,” he said. He also fears accidents could slow down FAA approval. “Don’t mess it up! Start by understanding precision tools that are already available.”

To gain a head start, you might join a hobby-flying club in your area to learn how to fly model planes, or take flying lessons.

Eventually, Blair predicts the impact of UAVs will compare to other great innovations that transformed agriculture like John Deere’s plow, McCormick’s reaper and Whitney’s cotton gin. “Those came with the industrial revolution,” Blair said. “We’re now part of an information revolution.”

The Blair family started farming with horses in Idaho in 1903, the same year that the Wright brothers flew the first airplane. Five generations later, Blair’s tractor drives itself and he uses a UAV to scout fields. “That’s a pretty short time frame for that kind of evolution,” Blair said.

In the future, Blair hopes that Empire Unmanned will gain customers, cover more and more acres, and become profitable. “Since I first started speaking to farm groups about this, the reaction has changed from blank stares to ‘How do I get one?’” Blair said. “It’s exciting to be part of a transformation in an industry that I love.”

Blair warns that information gained from UAVs may not always lead to increased yields. “It will make agriculture more efficient and sustainable,” he said. “It will tell us where to place nutrients, and it will help with water conservation and other conservation practices. That’s important not only to farmers, but to the media and the public.”

You can learn more about FAA’s rules on using UAVs as a hobby here: mfa.ag/1HS5Jw1. 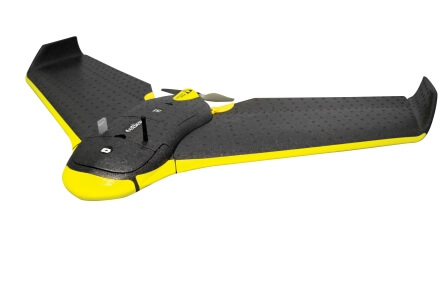 Start with a Cessna?

New FAA rules limiting the use of UAVs to make decisions on the farm slowed down RoboFlight’s foray into agricultural UAVs. But the company has deployed piloted Cessna airplanes to gather field photos for some time. As

Price explains, a Cessna carries its own fuel and covers more ground than a UAV—up to 30,000 acres in a day. UAVs commonly used in agriculture use batteries, which usually limits coverage to less than an hour. Price explained that taking one aerial picture every four seconds or so is just the starting point. Special cameras snap photos in the near-infrared color spectrum, which offers more information about the plants than the human eye can capture. Thousands of images can be merged into an “orthomosaic” that corrects for radial displacement of features in the image, locating them in their proper geographic position in the field. Then software, including software made by RoboFlight’s sister company, AgPixel, can be used to extract information from the orthomosaic.

“These sensors can detect chlorophyll difference weeks in advance of the human eye,” Price said. “You can identify stress factors earlier, allowing increased response time to remedy the problem. This technology will not replace crop scouts—it will simply make agronomists more efficient.”

Price reported that using onboard piloted aircraft is often less expensive than using unmanned vehicles, especially in rural areas and covering large acreages—but each has its place.

“We think we can save farmers a lot of money,” he said. “Even when adding in the cost of an agronomist to interpret the imagery, in one case we saved the farmer about $13 an acre in nitrogen costs.”

In another example, a scout spotted Canada thistle in a cornfield. The farmer sprayed the entire 120-acre field. “We flew the field and discovered only 0.6 acres with thistle,” Price said. “The farmer could have saved a lot in chemical costs.” In addition, the spray made the cornstalks brittle, which led to a 45 percent loss in the field when high winds caused green snap.

MFA prepares for the next step

Thad Becker looks forward to the day when UAVs bring a new level of precision to agriculture. “That day is not here quite yet, but the data we can collect is exciting,” said Becker, precision agronomy manager at MFA Incorporated.

“UAV technology has the potential to speed up field scouting and to find areas of the field that need attention,” Becker said. “I don’t see it replacing a scout in the field to diagnose the problem. We need to know the cause before we can provide a solution.”

MFA and its technology partners are closely following emerging UAV-based technology, with the goal of helping farmers interpret additional data that the technology may bring once it’s legal to use findings to make decisions.

Meanwhile, MFA offers the tools and expertise needed to take you to the highest precision level available today through MFA Crop-Trak and other programs.

For years now, MFA centers have offered precision computer hardware that farmers can add on to tractors and combines. MFA agronomists use data management software to interpret information generated by in-field computer systems.

“Today’s precision software gives you tools to make decisions that maximize efficiency,” said Bret Shaw, western Corn Belt account manager for SST Software, which MFA agronomists typically use. “As we move into the next phase of this young, exciting industry, farmers will continue to need help from MFA agronomists.”

MFA Incorporated has 145 company-owned Agri Services Centers, as well as 24 local affiliates with 20 branches, and a wide network of independent cooperatives and dealers; together they serve 45,000 farmers and ranchers in five states. For more information, visit mfa-inc.com.

SEE RELATED STORY HERE " How Agriculture will use UAV's"