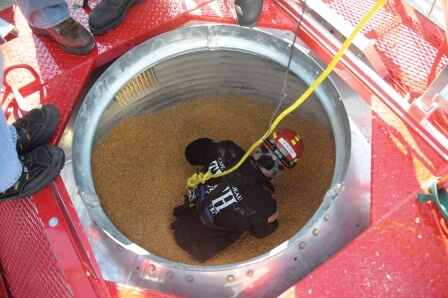 Over the last 50 years, hundreds in the U.S. have died from entrapment in grain, including more than two dozen in 2010, the most lethal year on record for grain bin accidents.

Education about grain bin dangers has been a long-running staple for farm magazines and extension agents. We still lose too many people. Now, to help firefighters, farmers and others learn how to safely operate in and around grain bins, University of Missouri Extension’s Fire and Rescue Training Institute is touring with a grain-engulfment rescue training simulator.

The simulator includes a grain hopper, a grain bin and a station where people can learn the proper technique of cutting grain bin panels in emergencies to quickly dump grain to enable rescue.

Simulator components are installed on a 40-foot-long trailer frame, so MU FRTI can take the training program on the road.

That’s an important feature, said Dave Hedrick, MU FRTI director. About 80 percent of Missouri’s firefighters are volunteers who often lack the time and resources to travel across the state for training, Hedrick said. Rural areas especially depend on volunteer firefighters.

“We need to be able to reach those volunteers in their communities where they work and live,” he said. “Most of them have full-time jobs, so the institute conducts a substantial amount of training at night and on weekends.”

Hands-on training is important because even with help from others, escaping a grain entrapment is not easy.

“The force ranges from 325 pounds for a 165-pound person buried hip-deep in grain to more than 1,500 pounds to rescue the same person who’s 3 feet under the grain surface,” said Karen Funkenbusch, MU Extension health and safety specialist.

In March, MU FRTI tested the simulator and held a train-the-trainer session in Columbia, Mo. Twenty-four of the institute’s adjunct instructors from throughout the state went through the training.

The simulator teaches trainees about techniques and equipment to retrieve victims of grain entrapment—and avoid becoming entrapped themselves. To create an escape route, rescuers wearing tethered harnesses can surround the victim with an enclosure called a cofferdam, allowing them to remove the grain from around the victim.

Hedrick said participants in the session will form the core instructional cadre that will teach firefighters, farmworkers, grain cooperative employees and others who might find themselves working with large amounts of stored grain.

“If we can teach what to do for grain bin safety, we don’t have to do rescues,” said Marty Schuessler, a regional training coordinator for MU FRTI.

Though it’s referred to as a grain bin simulator, what happens inside it is not precisely a simulation, said regional training coordinator Robert Woody. “We put actual people in the grain bins and actually rescue them.”